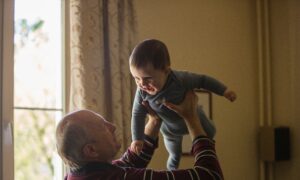 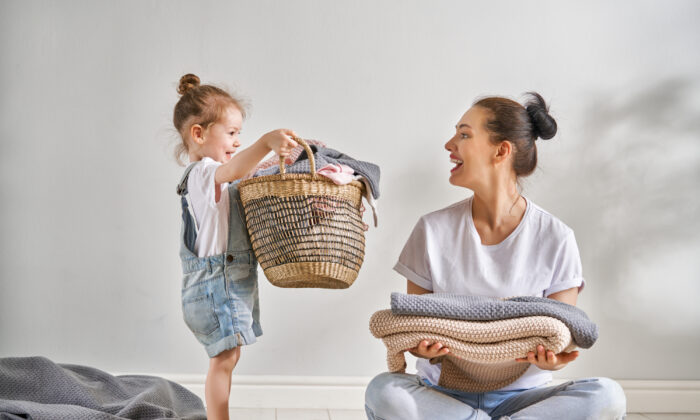 Taking the time to train children to do their chores has long-lasting benefits. (Yuganov Konstantin/Shutterstock)
Family & Home

Years ago, one of my little sister’s least favorite jobs was sweeping the kitchen floor. Although the kitchen was small, the chore would take her forever, and she would often sit there amidst the scattered chairs, broom in one direction, dustpan in another, particles of dust and crumbs trickling into an attempted pile.

Suddenly, however, this forlorn picture was transformed. Although young, my little sister soon became one of the best sweepers. I’d also venture to say that this chore became one of her favorites. What changed?

One day, our dad—likely when my sister was sitting amidst a pile of scattered dust and crumbs—came up to her and walked her through the chore, teaching her to methodically go over each floorboard.

That simple training, parent with child, side-by-side, doing a chore together, turned that miserable job into something my sister, young as she was, could be quite successful at. That same tactic is one that Michaeleen Doucleff recommends in a recent article for NPR.

Doucleff is the author of “Hunt, Gather, Parent,” a new book that looks at other cultures and examines the ways in which they raise children to be helpful, uncomplaining laborers in the journey of life. One of the main tricks to raising children in such a way, Doucleff says, is to have them do the same chores their parent is doing at the same time.

Such a task, while it sounds easy, isn’t, for getting children involved in an adult’s work is both messy and time-consuming. Yet if parents want to take the easy way out and do everything themselves, they are programming their child to lose interest and later complain when asked to pull their share of the load around the house.

But in doing so, parents aren’t only training their children to be lazy at home; they are also training them to be less successful at life in general. That point is one made by Julie Lythcott-Haims in “How to Raise an Adult.” Citing research by family education professor Marilynn Rossman, Lythcott-Haims explains that success in later life is directly related to childhood chores, for “those who were most ‘successful’ began doing chores at three to four years of age, whereas those who waited until their teen years to start doing chores were comparatively less successful.”

So why are children who learn to do chores early on more successful at life in general? I would suggest it’s because chores not only teach life skills, but because they teach humility as well.

Family physician and author Dr. Leonard Sax makes such a claim in his book “The Collapse of Parenting,” saying that kids who are let off the hook when it comes to chores get the idea that they “‘are too important to do menial tasks.’” This “unintended message puffs up the bloated self-esteem that now characterizes many American kids,” Sax explains.

In reflecting on his comments, however, I started thinking. Our children may get too puffed up when we don’t train them to do chores … but is it possible we aren’t training them because of our own prideful, self-absorbed mentalities?

As the NPR article suggests, we neglect teaching our children these things because it takes more of our time to train them, and even then, the chores aren’t always done up to our standards. We want our houses to look good to others, so dishes or vacuuming done by a child still learning the task might not make the house as presentable as we would like.

Likewise, we claim we don’t have time to teach our children these tasks because we’re too busy with work, or helping on a school committee, or organizing an event at church, or orchestrating the community garage sale. These activities are public-facing and can make us feel like we’re accomplishing a lot of good.

But what if we adjusted our perspective, recognizing that our children are the most important things in the world? If we pause to remember that children are a parent’s legacy, then the time we spend training them, while time-consuming and not always initially rewarding—perhaps even humbling—will eventually reap a huge return on investment as we see our children turn into responsible, successful, and hard-working adults.