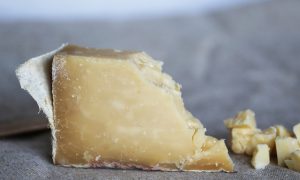 The Art and Science of Aging Cheese
0 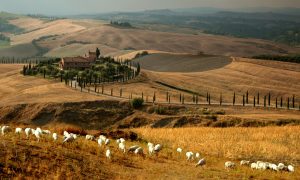 A Pecorino to Savor Under the Tuscan Sun
0 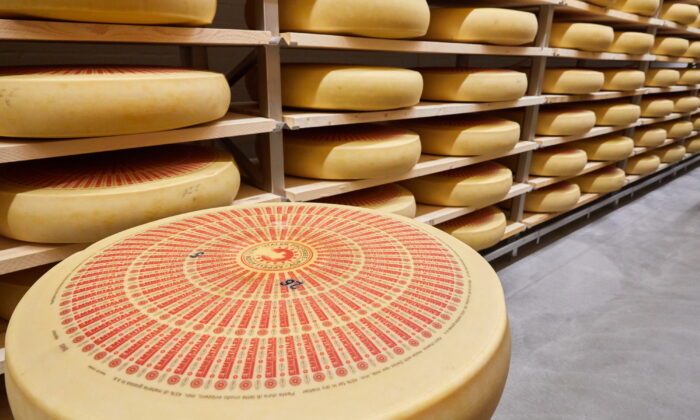 Emmentaler, Switzerland's most iconic cheese, is made by a little over 100 creameries in 200-pound wheels. (Tom Trachsel for Gourmino)
Food & Dining

Swiss Cheese 101: What to Know and What to Try—Beyond the Floppy Deli Slices

Real Swiss cheese, made in Switzerland, has a rich history and whole range of varieties to discover
By Christine Clark
Print

For many Americans, the phrase “Swiss cheese” brings to mind a single cheese—the floppy, holey, mass-produced slices from the deli. Compare that to French or Italian cheese, categories that evoke a huge range of varieties.

Perhaps for this reason, Swiss cheese is “one of the most exciting categories to discover,” said Joe Salonia, USA sales manager at Gourmino, a collective of Swiss Cheesemakers that also functions as a Swiss cheese import company in the United States.

Those deli slices that we perhaps lazily deem “Swiss” actually are hardly so. They’re an American, largely industrial take on Emmentaler, an iconic cheese from Switzerland.

When it comes to truly Swiss cheese—as in, cheese made in Switzerland—there are around 450 kinds.

“It’s like jazz music,” Salonia continued. “It gets pigeonholed as just being one thing, but there are many artists, and there’s a long tradition.”

Swiss cheeses are flavorful and varied, from fruity, brothy L’Etivaz from the Western Pays d’Enhaut region to nutty, funky Tête de Moine from the Jura in the Northwest. There’s storied Emmentaler, the regal ancestor of those floppy deli slices, from as far back as the 13th century, alongside newcomers like the super savory Ur-Eiche, produced only by the Girenbad creamery, from within the past decade.

Archeological evidence shows that the history of cheesemaking in the region may date back as far as the Iron Age. Roman historian Pliny the Elder mentions “Caseus Helveticus,” or “the cheese of the Helvetians”—one of the tribes living in what we now call Switzerland. By the 18th century, Swiss cheese was a prized commodity and available for purchase throughout Europe.

In the 20th century came a key player in the history of Swiss cheese: the Swiss Cheese Union (Schweizer Käseunion AG), sometimes nicknamed the Swiss Cheese Mafia. Formed during World War I, what began as a wartime effort to support farmers evolved into a government-sponsored cheese cartel.

Cheesemakers that wanted to be eligible for distribution had to make one of the few union-approved cheeses—Emmentaler, Gruyère, and Sbrinz—and prove that they could make enough to meet demand. For the cheesemakers who were supported by the Swiss Cheese Union, it was a guaranteed market and profit. For everyone else, it was a little fishy. Small cheesemakers closed up shop, changed their business model, or went underground. Unapproved cheeses could technically still be produced, but could only be sold in one’s shop or village. Many disappeared.

Today, Swiss cheese producers are taking their newfound freedom and channeling it into exceptional new products, and more artisanal takes on old favorites. Most of the Swiss cheeses we get in the United States are hard varieties, but still with a wide range of flavor profiles.

As Salonia explained, “Switzerland is not part of the European Union. Without naming names, many big brands with large demand buy milk from other countries. Milk is a commodity traded like oil. One extreme but possible example is that your French Brie-style cheese might not have a drop of French milk in it.”

The problem that remains is making sure that your Swiss cheese did actually come from Switzerland. It’s trickier than you might think. For instance, a recent U.S. court ruling stated that Gruyère qualifies as a “generic cheese name,” meaning that in the States, there will be options labeled as such that don’t hail from Switzerland.

Instead, look for Le Gruyère Switzerland AOP. Name-protected cheeses, like those that fall under the AOP designation (Appellation d’Origine Protégée, or Protected Designation of Origin in English), must be produced, processed, and refined in a specific region of the country, within a set of strict guidelines.

Another term to look for is “alpage,” meaning “mountain pasture.” This is a descriptor for some of the most special cheeses, made only in the warmer months when the animals (almost always cows) were grazing on lush, sweeping Alpine pastures. This change in diet results in milk, and therefore cheese, with a unique character.

“There’s regulation around the term alpage,” Salonia elaborated, “so the cows had to have eaten a certain amount of grass, mountain herbs, and wildflowers. Milking has to happen on or near the Alps, as does the cheesemaking process.”

In the United States, Gruyère Alpage is the most common cheese in this category. If you can, try tasting Gruyère Alpage back-to-back with the standard AOP variety—the difference is immediately apparent. There are flavors you don’t expect, often floral and deep fruity notes, that showcase the unique terroir.

What are the cheeses that Switzerland does best? That’s up to you and your palate! But here are some standouts. Aside from Sbrinz, they share a similarly smooth, semi-hard to hard texture, but their flavor profiles run the gamut.

Emmental cheese, the royal granddaddy of the deli slices, is made by a little over 100 creameries (as opposed to 800 at the peak of the Swiss Cheese Union) in 200-pound wheels. It is a raw cow’s milk cheese, from cows that were fed grass or hay. It can be aged as little as four months or as long as a year or more. Emmentaler has a distinctive raw cashew flavor with a hay-like finish, and melts like a dream.

A raw cow’s milk cheese that’s been made for centuries, and whose recipe today is very similar to the original. Salonia says that tasting Sbrinz is “like looking at a dinosaur leg bone” in that way. Sbrinz is made by 42 producers. It must be aged a minimum of 18 months, but you usually see it in the United States at around three years, in craggy, granular pieces that Salonia likens to rock candy. Sbrinz tastes like toffee, pecans, and chicken broth, and is a real treat when you find it. Parmigiano Reggiano is said to be a descendant of Sbrinz.

Cheesemongers like to describe L’Etivaz as “retro Gruyère.” In the 1930s, the name protection laws for Gruyère were changed, in hopes of making Gruyère more widely available. A group of 76 cheesemaking families felt these changes compromised their ancestral cheese and withdrew from the Gruyère collective. They banded together, founded their own cooperative, and built their own cheese cellars. They make what we now call L’Etivaz, produced using traditional methods between May and October, when the cows can glut themselves on fresh Alpine pastures.

L’Etivaz is a layered, complex cheese with a flavor profile that changes throughout the season. Sometimes it tastes of beef broth and wild strawberry; sometimes it tastes of roasted pineapple and caramelized onion. It takes flavors that we don’t expect to be compatible and weaves them together in a compelling, often mind-blowing way.

Unlike the three cheeses above, Ur-Eiche (translating to “old oak”) is a new cheese only made by one producer. The Girenbad creamery, working with a predominantly female team, crafts this cheese with raw milk, homemade rennet, and a house brine solution that spends time in oak barrels. It’s rich, decadent, and hazelnutty, with a long umami finish.

Cheesemaker Michael Spycher of the Fritzenhaus dairy is world-renowned for his award-winning Gruyère. Hornbacher is another of his creations and somewhat of a pet project—he’s been making this since before the Swiss Cheese Union disbanded, and quietly sold it at his and his wife’s cheese store and the local market. The milk for Hornbacher comes from their neighboring farmers, who deliver it to the dairy twice a day. Hornbacher’s flavor is reminiscent of fresh grass and schmaltz-fried potato skins.

Master cheesemaker Walter Grob took over the Engelberg dairy in central Switzerland in 2015, when it was still a Benedictine abbey. Engelberg Cheddar is a rustic take on cheddar, made using the milk from his neighbor in the Alps. Brawny, flavorful Engelberg features notes of potting soil and a Sunday roast. Grob aspires for Engelberg Cheddar to be more famous than Mount Titlis, the 10,623-foot regional skiing destination nearby.

Christine Clark is a professional food and beverage nerd. She is a certified cheese professional by the American Cheese Society and teaches cheese classes across the United States. Her work has appeared in VinePair, Bon Appétit, Fine Cooking, and Travel + Leisure.