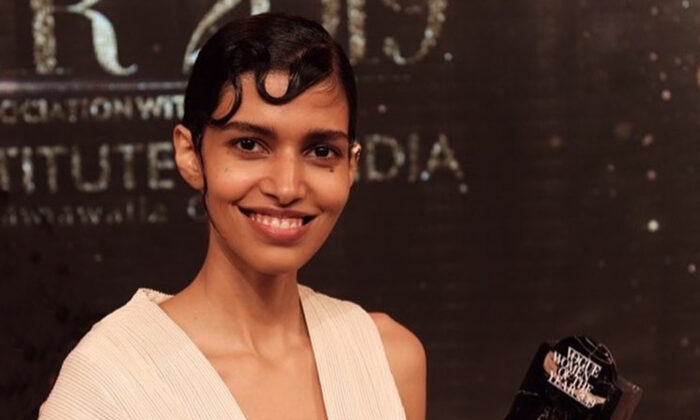 New York based model, Pooja Mor received the “Young Achiever of The Year” award at Vogue Women Of The Year 2019 on Oct. 19, 2019 in Mumbai, India. (Photo courtesy of Hemang Shah (hs.shoot))
Life & Tradition

Being a fashion model isn’t just about walking the runways.

For Pooja Mor, a model with a cause and the recipient of the “Young Achiever of The Year” award at Vogue Women of The Year 2019, she has become a voice for the voiceless. At the award ceremony, the supermodel fearlessly spoke about the worst genocide unfolding in the world—the persecution of Falun Gong in China.

Falun Gong is an ancient mind-body discipline based on the tenets of truthfulness, compassion, and forbearance.

Mor, who hails from Ahmedabad, India, is now based in New York. She took her first steps into the modeling world in 2012 after winning the “Clean & Clear Ahmedabad Times Fresh Face” event. Her international debut came in 2016 when she walked the runway at Nicolas Ghesquiere’s Louis Vuitton Cruise 2016 show in Palm Springs, California.

Since then, the 27-year-old has gone on to work with the likes of Elie Saab, Alexander McQueen, Tory Burch, Dolce & Gabbana, Calvin Klein, and more. Mor received the “Model of the Year” award at Vogue Beauty Awards 2016.

In 2018, the fashion icon received a “NEW WAVE: Creatives” award by the British Fashion Council. Early this year, Mor also gave a powerful talk on how adversity can be a good thing, at TEDx Talks.

Despite having all these achievements under her belt, it was only recently that Mor, who also holds a degree in computer engineering, realized the meaning of true achievement.

At the Vogue Women of The Year 2019 awards, which were held in Mumbai, India, on Oct. 19, Mor shared her realization with an audience composed of international and Bollywood celebrities.

“I recently realized what it is to truly achieve something. It was when I started working not only for myself but for others and becoming the voice for the voiceless,” Mor said at her acceptance speech, a video of which was later uploaded to her Instagram account but is currently unavailable.

For the past few years, Mor has been focusing on a cause that is close to her heart—raising awareness of the persecution of Falun Dafa in China.

Mor was first introduced to Falun Dafa, also known as Falun Gong, in 2014.

“I felt it was such a beautiful meditation practice, so peaceful and always made me so positive,” Mor told The Epoch Times via email.

Mor couldn’t accept it when she heard that the Chinese Communist Party had banned the peaceful meditation practice in July 1999, after the number of people practicing it skyrocketed within five years from its introduction to the public in 1992.

Since 1999, “millions of people who practice Falun Gong have been subject to wrongful imprisonment, ‘brainwashing’ sessions, and torture, with thousands of deaths, confirmed in custody,” according to the Falun Dafa Information Center.

In recent years, media outlets have also reported that the communist regime has been harvesting organs from prisoners of conscience, with the majority being from Falun Gong practitioners.

“A government is supposed to protect its people, and I was not able to believe such a thing could be happening, especially to a group of people who follow the principles of truthfulness, compassion, and tolerance,” Mor said.

She said it wasn’t easy for her to come to terms with it. She started doing her own research and watching documentaries on forced organ harvesting in China, and she came across many articles confirming that these things are still happening.

So when her agent asked her if she had a cause she wanted to raise awareness about, the answer was obvious. She started writing articles and talking to people about the persecution. “Most of the people I talked to were shocked to know about it and couldn’t understand why such a peaceful practice is being persecuted in China,” she said.

While Mor has been actively raising awareness about the persecution of Falun Gong in China on her social media platforms, she had never spoken in public about her own faith in Falun Dafa.

The opportunity presented itself when she heard that Vogue India had chosen her as the “Young Achiever of The Year.”

When Mor started to pen her acceptance speech, it was just a regular speech thanking everyone related to her professional career.

Then she asked herself, “What have I really achieved in life?” and “What makes me an achiever in my own heart or consciousness?”

She realized that “true achievement comes when [you’re] not only working for yourself, but more importantly, when you work for others and stand up for people who don’t have a voice, and to stand up for a bigger reason that needs light in this world.”

“Once I completed the speech, a sweet contentment rushed through me, which made me a better person. That’s a true achievement in my eyes.”

“By standing up for others, I realized what it means to truly achieve something in life,” Mor concluded in her speech.

Mor told The Epoch Times, “I remain grateful for Vogue India’s award, and when I gave the speech that night, I was touched by how everyone responded to it, wanting to learn more about the human rights violation.”

But then, she said, “after I posted the video of the speech on Instagram, my agents were approached by Vogue India requesting to edit or take down the video because they ‘don’t encourage the use of their platform for personal political statements.’ I think it’s just an indication that a lot more awareness and clarification needs to be done in this industry, as well as many others.”

Mor reaffirmed that she will continue to raise awareness of what is happening in China.

“I can’t sit and watch millions of innocent people being wrongfully persecuted and their organs being taken without consent and without anesthesia. I have to stand up for it—it’s my cause, and that is, to me, being a voice for the voiceless.”