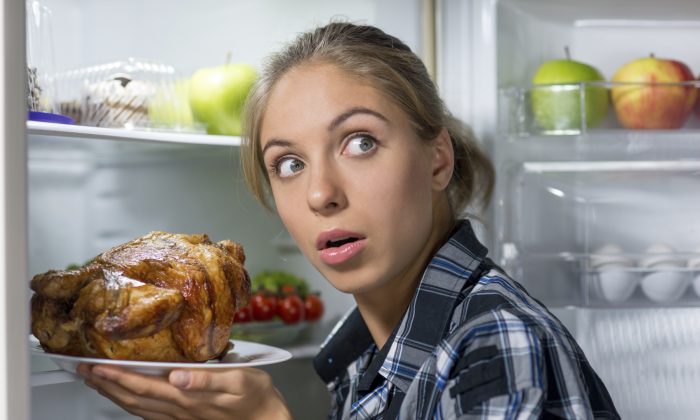 Are you hungry? Or is it something else? (dima_sidelnikov/iStock)
Global Q&A

Successful Weight Loss Starts With Our Emotional Connection to Food

Americans are obsessed with weight loss, but you couldn’t tell by looking at us. Today, more than one-third of U.S. adults and nearly 20 percent of young people are obese, according to the Centers for Disease Control and Prevention.

We’ve tried to buy our way out of the problem. In 1992, Americans purchased about $30 billion in diet programs and products according to the U.S. Food and Drug Administration. Today, the diet and weight-loss industry rakes in over $60 billion a year, yet our obesity epidemic only continues to rise.

For all the time, money, and mental energy we throw at it, science shows that most dieting efforts are doomed to fail. A 2006 study from The New England Journal of Medicine found that most people in weight-loss programs “regain about one-third of the weight lost during the next year and are typically back to baseline in three to five years.”

A recent national survey of more than a thousand people commissioned by Orlando Health took a look at what is driving our weight loss strategies. Researchers found that 31 percent of Americans point to a lack of exercise as the biggest barrier to weight loss, while 26 percent blames it on dietary choices. Another 17 percent believe the cost of a healthy lifestyle is simply too expensive for most Americans to afford, while another 12 percent say it’s because we lack the time necessary to devote to the effort.

According to Diane Robinson, Ph.D., a neuropsychologist and program director of integrative medicine at Orlando Health, people focus almost entirely on the physical aspects of their strategy, such as diet and exercise, but ignore the emotional side of the equation. The survey found that only 10 percent of Americans considered psychological well being a factor in weight loss.

Previous studies have shown that emotional issues such as stress, anxiety, and depression are often linked to higher body mass indexes. The act of eating also triggers neurotransmitters in the brain that give us a sense of pleasure, much like euphoric drugs or falling in love. Add to this equation a world in which the cheapest, most accessible, and most fattening foods are advertised incessantly.

Yet when our weight loss strategy doesn’t work, we’re quick to blame the dieter rather than the diet, and beat ourselves up for lacking will power. Defeated, we turn back to our favorite foods to cope.

For these reasons, Robinson says that a successful strategy must first address our emotional connection to food and exercise, otherwise our unexamined psychology will always undermine our efforts.

The Epoch Times talked to Dr. Robinson about how food plays into our sense of satisfaction and how we can take control of it.

Epoch Times: Eating is so closely tied with emotion. Should we change our perspective to see food more as nourishment than comfort?

Dr. Diane Robinson: Well, for me it’s always going to be nourishment and comfort. We’re never going to be able to separate these two because food is so rewarding. What we really want people to have awareness of is that first you have to understand why you’re eating.

You hear a lot of talk about mindful eating in the media a lot, but it really is about inserting the pause before you insert the food. Ask yourself: What’s going on with me right now that I’m reaching for this particular food at this particular time?

So often we see diets fail. First of all, we’re not set up to function that way, and we don’t really address the mental aspects of our relationship with food. If we start there, then we’ve got a better shot at least.

Epoch Times: What made you consider the emotional component of eating and weight loss?

Dr. Robinson: This is not new. It’s been in the psychological literature for a very long time. But what was surprising about the survey we ran was that it still seems to be under the radar. In other words, this is a piece of information that we’ve known about literally for decades, but we’re still not getting it.

We’re still not understanding that if we want to be healthier it doesn’t start with diet and exercise. It starts with figuring out, in our mind—in our brain—what’s driving it. If we don’t look at what’s driving the behaviors we’re doomed to fail. End of story.

Epoch Times: How do we identify the emotional aspect of our eating habits?

Dr. Robinson: There are techniques that have been recommended for a very long time, but again only a small percentage of people are using them.

It’s about being honest with yourself. So, for example, what’s your favorite food?

Robinson: Okay, so the next time you want to order a pizza ask: Is this really what I want? If so, than why. What’s appealing about it? You might say, “It’s hot and delicious.” Well, can I have that hot deliciousness one day a week instead of five days a week? The other days I can encourage myself to have something healthier.

So you start with a question and then write it down. It doesn’t have to be in a fancy journal. You are not preserving this for posterity. All you’re trying to do is put together the clues for yourself. That’s it. You’re playing detective with yourself about figuring out what’s going on with you.

A successful strategy must first address our emotional connection to food and exercise.

You do that for a couple of weeks and then you start to see a pattern. You might say, “Oh, isn’t this interesting. Every time I’m really angry I order a pizza. Is the pizza just helping me cope with the anger? Is there something else I can do? Is there a healthier way I could address this?”

It’s about getting to know yourself. It’s interesting, people quite often can’t even name the emotion. They might say, “I feel bad today.” What’s that mean? Let’s dig a little deeper.

I’m not talking about identifying a mental disorder. We pathologize all the time, to ourselves and everyone around us. This is just about getting to know ourselves at a deeper level and just being mentally healthy. If we get mentally healthy then the physical health falls right behind it.

So get acquainted with yourself. “Why should I get off the couch?” you say, “It’s much more attractive to sit next to that remote.”

But can you do one thing a bit differently? If you can make just one little change per week, then by the end of the year you have a major life transformation that has taken place very easily in those baby steps.

But most of us come up with these New Years resolutions: “I’m going to lose 20 pounds by the end of January. I’m going to go to the gym every single day.”

That’s why gyms make all their money. Everyone joins in January and stops going by February. It’s great for gyms, but not really great for healthy behaviors because we don’t think things through.

So, a little change and getting to know yourself: that’s probably the best way to go about this.

Epoch Times:  So by taking small steps and probing the problem a little bit at a time it will help you develop a more intimate and manageable relationship with yourself.

Dr. Robinson: A lot of things that we do are just avoidance behavior. We avoid saying that we’re really tired, or that we’re unhappy. We develop coping skills but it masks what’s going on with ourselves.

It’s a journey. It’s not, “I’ll only be happy if I lose these 20 pounds.” Oftentimes, it’s not really the weight, it’s something else. So just start by getting to know yourself.

Epoch Times: It can be hard to diet when we eat meals with our families and friends, because if they eat poorly you’re always confronting the foods you’re trying to avoid. Do we have to isolate ourselves to be healthy?

Dr. Robinson: This is part of the problem we face when we go on a diet. The problem is that it’s black and white thinking. You think,”Oh, I can’t go to that party because I’ll want to eat the cake.”

But if you go to a party and it’s a special celebration and there’s a birthday cake. Have some cake if it’s there, but have a small slice, and enjoy, savor, and love it, but don’t eat half the cake. Take it in moderation.

Food plays this wonderful role in our lives. We just got through with Thanksgiving and what a wonderful meal it is. Yes, we all overeat. I think it’s kind of the law to overeat on Thanksgiving. We understand that it’s a crazy celebration.

It’s an understanding that we’re here together. It’s not about depriving yourself, it’s about understanding why you’re eating. You could say, “I’m giving myself the day off on Thanksgiving. That’s going to be fun for the sheer pleasure. It’s a national celebration of overeating. That’s fine because you understand why you’re doing it, so you don’t beat yourself up.

You eat the pumpkin pie because it’s Thanksgiving and you enjoy every morsel of it. But tomorrow you make some healthier choices.

Epoch Times: So if you indulge, then do it with purpose.

Dr. Robinson: How many people just grab the bag of cookies or chips and just keep eating while they’re watching television. We’re not really conscious of our actions a lot of times. It’s just pure habit.

I want more than anything for people to understand themselves and their relationship with food.