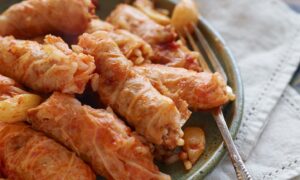 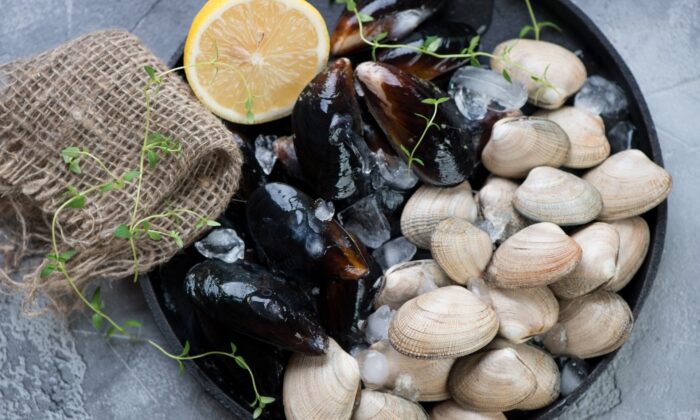 On the East Coast, the local diet was heavy on seafood such as clams, scallops, seaweed, oysters, mussels, eels, and fish. This recipe depends on a diversity of quality seafood. (Nickola Che/Shutterstock)
Recipes

Stuff Your Bird With Seafood

Thanksgiving, as we observe it today, doesn’t have much in common with the original feast of 1621.

The temperature of the vibe between the Pilgrims and Wampanoag was above comfort level at the dinner table, with some participants arriving ready to rumble. (Come to think of it, maybe today’s Thanksgiving table hasn’t strayed too far, being notable for bringing together people from warring political tribes to break bread together, with notoriously mixed results.)

There was no pumpkin pie, because butter and flour were unheard of or sorely missed, depending on one’s affiliation, but wildfowl was likely on the menu, which leads me, among others, to conclude there was stuffing. Historians point to their evidence, while I point to the simple fact that both Pilgrims and Indians are human beings, and human beings know how to cook. And cooks don’t let an empty body cavity go unstuffed, especially during a three-day feast.

Unfortunately, we seem to take this for granted in today’s America, where we think nothing of passing around side dishes filled with savory bread pudding called “stuffing” that has never seen the inside of a bird. That’s the fight I’ll pick this year.

Technically, this never stuffed material is “dressing,” not “stuffing.” The reason this distinction is important is because the stuff that comes out of the bird is so much better than the side pan, even if the same went into both vessels. The juices from a baked bird impart an unmistakable, irreplaceable joy to the stuffing.

On the East Coast, the local diet was heavy on seafood such as clams, scallops, seaweed, oysters, mussels, eels, and fish. I grew up in coastal Massachusetts, where we would sometimes dig a hole in the beach and fill it with ingredients like those above, and hot rocks, and have a clambake.

Somewhere along the way, in my Thanksgiving ruminations and experimentations, I decided it would be a good idea to stage a clambake inside a bird. In order to make it taste more like stuffing, I add breadcrumbs, herbs, lemon, and aromatic veggies: onions, carrots, and celery.

This recipe depends on a diversity of quality seafood. It’s good to have at least one with the shell on, like clams or mussels, because that makes it seem more like a real clambake. Scallops and shrimp work great, too. I must have a jar of oysters, like you can get at the seafood counter of many stores. And I really like imitation crab, like what you get in a California roll. It soaks up the juices like a thirsty sponge.

Chickens, ducks, and turkeys all work fantastic. Rabbit tastes like chicken, so that should work too.

But whatever bird you are able to stuff, large or small, you might find yourself with more stuffing than you can possibly cram into it. The easiest thing to do is to stuff it around the bird, along with the potatoes, and let it melt in the pan juices. Although not literally stuffed, it sucks up enough of the juices to potentially rule out gravy, and tastes like all the flavor and fat it absorbs.

Another option for too much stuffing: pull the skin away from the bird and stuff it on up between the skin and bird. If basted properly, this layer of stuffing can help keep the bird moist. The skin might split, especially if you cram shells up there, but the crusted stuffing becomes a new skin, absorbing as many bastings as you care to pour.

And finally, we can do the almost unthinkable: bake that excess stuffing in a side pan. Put it in a pan as if you are making a dish of dressing. Put a bunch of chicken wings on top, and cook it until they melt into the dressing. And just like that, after all of my huffing and puffing, I have figured out a way to make it taste like stuffing.

But my favorite part of this fishy bird dish is the clam juice brine. You’ve probably heard of clam juice as a mixer, adding deep umami notes from earth and sea to your Bloody Mary. And we can thank James Beard for nationalizing the idea that you should brine a chicken before baking it, because the salt gets in the meat, and salty meat absorbs more water than non-salty meat, so it stays moist.

My salty clam brine combines the two concepts and brings them deep into the meat. It flavors the stuffing via the fat, and adds delicious authenticity to the feast.

It may not dissolve the animosity at the table, but perhaps it will at least help keep everyone’s mouths too stuffed with food to talk. And that, my friends, is the true point of Thanksgiving.

Some clam juice is salty, some isn’t. Sometimes, the salty ones don’t mention salt in the ingredients, but it will show up in the RDA values for sodium. I’ve seen it with zero grams, 40 grams, and 100 grams of added sodium, with different bottle sizes. So the salt can be a little tricky. Taste your clam juice, and if it’s really salty, reduce the added salt by a teaspoon or two.

Rinse the bird, take out any giblets stashed in the cavity, and brine the bird in the clam juice with the salt and 2 cups of water. Push down on the bird hard, so the body cavity fills with brine. Turn it occasionally, and marinate for at least four hours in the fridge.

Preheat the oven to 350 degrees F. Rinse the bird, pat it dry, and put it in a roasting pan.

Add the oil to a large pan over medium heat, and sauté the onions, garlic, carrots, celery, and apple with the black pepper, thyme, rosemary, and sage. After 10 minutes, add the seafood, wine, and lemon juice and squeezed lemon quarters, and cook a few minutes longer, but don’t try to cook all the seafood. Add the breadcrumbs and stir it all together.

Stuff the mixture into the bird, and under the skin, if you have extra. Place the potatoes around the bird, along with more extra stuffing, if you go that route.

Cover with foil and place in the preheated oven. After 90 minutes, remove the foil. The skin of an extra-stuffed bird will have receded like the tide, leaving a bunch of mussels clinging to the bird like it’s a beach rock. Turn the oven down to 300. Baste every 15 minutes until done; the stuffing on top, including the seafood, will hold the baste like a sponge. After another hour, use a meat thermometer to make sure the bird’s internal temp is at least 165. Rest, serve, and eat.