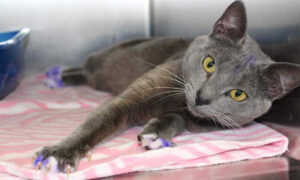 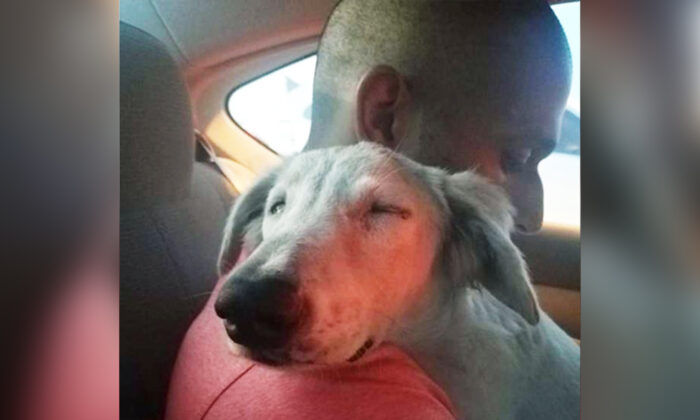 Anand Raman with the stray dog he had rescued off the streets of Dubai. (Photo courtesy of Anand Raman)
Life & Tradition

Raman, on his way to visit his sister, saw the dog straight away.

Speaking to The Dodo, Raman described the unfortunate pup: “His fur was matted and his legs weren’t quite right.” But Raman wasn’t put off by appearances. The dog ran towards him “with a curious but excited disposition, wagging his tail excitedly,” as Raman knelt to coax him over. The pup looked for all intents and purposes like he’d just discovered his best friend.

Raman petted the dog gently as he mentally joined the dots and gave substance to his plan of action. His sister would help, he knew that much. So would his brother-in-law. After a few hurried phone calls and a solid “yes” from both family members, Raman carried the dog into their car.

“He immediately fell asleep on my shoulder,” Raman remembered.

The party’s first stop was the vet. The dog, which from the look of him had never been owned, or loved, in any significant way, was exhausted. At the clinic, Raman learned more: the dog had rickets, a condition that causes bowed legs and stunted growth, which is the result of chronic malnutrition. However, the vet assured Raman that it could be treated.

This was turning out to be the pup’s lucky day. If Raman intended to give the dog a home, his life was going to improve exponentially. (The dog’s, too!)

At home, Raman gave the pup, which was both dirty and rather smelly, a bath. “I was surprised to find out that his fur was actually pure white after all the dirt and grime came off his body,” Raman revealed. Aware that his new roommate would be needing a name, Raman chose “Snowy.” After his color-changing bath time experience, it seemed appropriate.

A vet check and a bath was a great way to get started, but settling Snowy in to his new home proved harder than expected. And not because Snowy didn’t want to be there, quite the opposite. The poor dog, who had likely spent his whole life on the street, couldn’t quite believe his luck. And as such, he didn’t think that it would last.

“He wasn’t sure where to go and what to explore, so he’d just sit in a corner,” Raman explained. “He was constantly terrified that I was going to leave him back on the streets.” Raman went on to describe how Snowy would pull on his leash back towards the building where they lived whenever his new owner would take him for a walk. “This happened for a while,” Raman continued, “until he realized we were not going to let him go anywhere fast.”

However, it wasn’t too long before the penny dropped. Two months later, Snowy had embraced his new home. And he got very, very comfortable, even sleeping on the bed with his new best friend. A million times better than the underside of a car in an office parking lot.

“He sleeps and waits for us to get home from work,” Raman said. “He also gels amazingly well with any dog he comes across,” he continued, likely owing to Snowy’s life on the streets of Dubai and a finely honed self-preservation mechanism. As such, he is also “very well-behaved with kids and guests,” Raman stated happily.

This young man and the (formerly) emaciated dog never realized that their lives would change so much on that hot and sunny day in Dubai. “He showers us with love,” Raman shared, “and we reciprocate the same with him.”

We dare you not to be touched by this heartwarming story of luck, love, and ultimately a very deep friendship between one man and his dog! Share with all the dog lovers that you know.