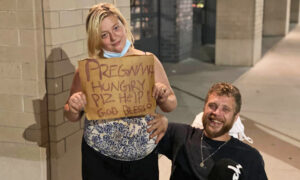 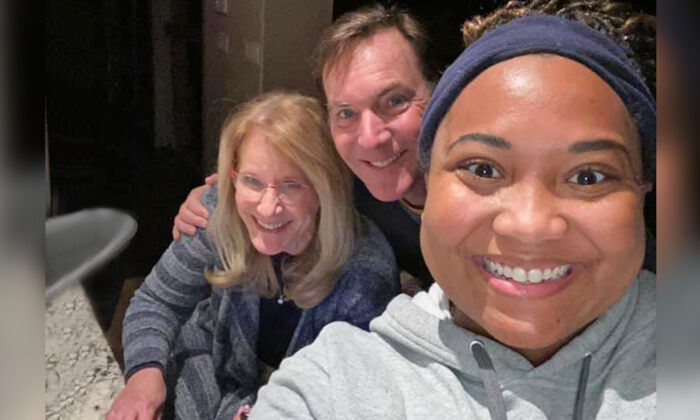 A Texas food delivery driver whose vehicle struck ice outside a couple’s home became their impromptu house guest. She ended up staying five nights in the couple’s guest bedroom, and now calls them her “guardian angels.”

Storms encroached as driver Chelsea Timmons tried to complete her last grocery delivery in Austin on Feb. 14. She had hoped to be home to Houston “before the snow hit,” she posted on Facebook, “to sip some wine and eat some Valentine’s chocolate.”

However, contrary to what she had decided, her plan didn’t come to fruition.

Pulling up to Nina Richardson and Doug Condon’s home, west of downtown Austin, Timmons’s car started slipping on the inclined driveway. She leaned on the brakes but the car didn’t stop and continued to go forward down the driveway, unfortunately bumping into a tree in the front yard.

“I was just grateful that my car did not hit the house,” Timmons told KXAN.

Timmons unloaded the delivery and explained to Richardson and Condon what had happened. Her car and the property, she said, were fine; however, the tree was not.

Hoping to build traction on the ice, the trio tried epsom salt, bird seeds, and even sand under the tires, but nothing worked.

Timmons called AAA, but all tow trucks were occupied with emergencies amid the worsening storm. She even tried to get an Uber/Lyft/Taxi to take her to a hotel to stay for that night; however, all to no avail. So the couple, who have daughters of their own, invited Timmons to stay with them that night.

“When she first came in she was, I think, feeling a little uncomfortable being in a stranger’s house, but pretty quickly it kind of has moved into her just being part of the family,” Richardson told ABC 7.

Over “a lovely steak dinner,” Timmons told the couple about her dream of opening a bakery. Richardson invited her to try out a new recipe and Timmons set to work baking a coconut cake as a token of her gratitude.

Meanwhile, Timmons’s Houston apartment building lost electricity and water amid the storms. “Me being ‘stuck here’ actually turned out to be a better situation than it was if I would have made it home,” she reflected.

Over the next five days, Timmons joined the couple for meals and enjoyed the sanctuary of the guest bedroom with an en-suite bathroom, its own TV, and two cuddly dogs at nighttime.

The couple not only helped her through the storm but also didn’t let her leave, even though she suggested going to a hotel.

“Every morning after they say, ‘No worries, stay a bit longer,’ I go to ‘my’ room and shed tears of joy … How AMAZINGLY BLESSED am I right in this moment?!”, Timmons posted on Facebook.

Condon confirmed that as soon as weather conditions improved, the couple would send Timmons on her way with food and blankets, “just in case.”

On Feb. 19, Timmons posted a selfie from her car, finally headed home to Houston.

She told ABC 7 she was beyond grateful that Richardson and Condon had been “not only able, but very willing” to let a stranger into their home and keep her safe, warm, and fed.

“If my car was stuck in front of anybody else’s house, I don’t think that I would be in this situation,” she said.