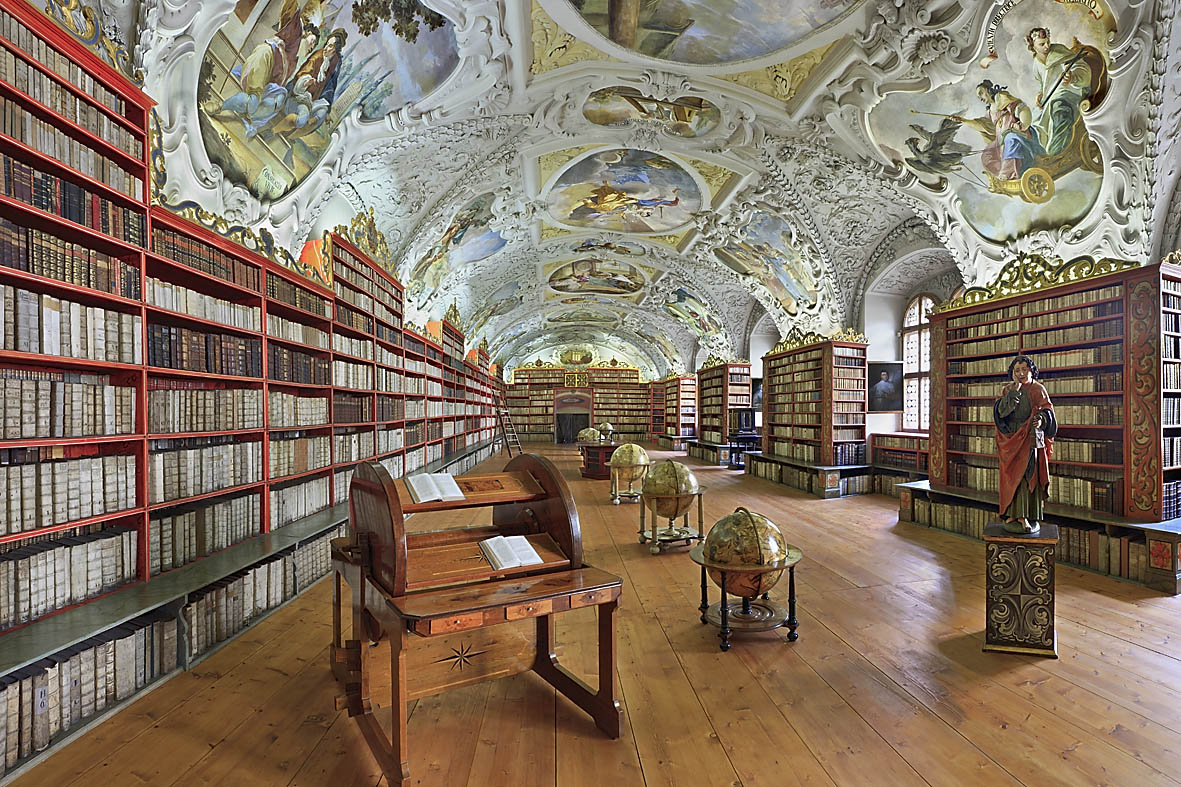 Strahov Monastery and Library: An Ornate Relic Tucked Away in Prague

The Strahov Monastery was built in Prague, Czech Republic in around 1143 by Bishop of Olomouc Jindrich Zdík after his pilgrimage to the Holy Land in 1138. The monastic community thrived with the arrival of the Premonstratensians from Germany. Their arrival brought forth many architectural developments to the monastery, beginning with the addition of a Romanesque basilica, and eventually leading to the construction of stone monastery buildings.

The monastery has stood the test of time even after enduring disasters and attacks throughout many centuries. Any damage was quickly amended through careful reconstruction by abbots such as Jan Lohelius and Kašpar Questenberg who also added new additions to the monastery. These include new gardens, a monastery brewery, and even several additions to the town including construction of the College of St Norbert in the New Prague Town which became where members of the order studied. During the 17th and 18th centuries, many other abbots continued in their efforts to reconstruct the monastery after periods of war.

The Features of the Strahov Monastery

The Theological Hall, part of the Strahov library, was built in the Baroque style and completed in 1679 under Abbot Jeroným Hirnhaim. The final addition to the abbey complex was the development of The Philosophical Hall built in the Classical style under Abbot Václav Mayer who completed the building somewhere around 1794-1797. There were no further major developments after this time and the following generations of abbots focused their attention on minor exterior repairs and maintenance.

The Philosophical Hall library was made accessible to the public, per Mayer’s wishes, and played a great role in the Czech National Revival in the 18th and 19th century which resulted in a period of national awakening and prosperity until the Communist takeover in the 1950s. During this time, the Premonstrates were banished and the monastery and its libraries were transformed into the Memorial of National Literature, and subjected to thorough archaeological research.

The Strahov Monastery was returned to the Premonstrates after the Velvet Revolution in 1989 led by anti-communist protestors which brought an end to the one-party state.

The triple-aisled Romanesque basilica was built as part of the Church of the Assumption of the Virgin Mary and was considered one of the first additions to the monastery in the 12th century. It was reconstructed in the Gothic style after a fire in 1258. According to the Strahov Monastery, the flat wooden ceiling was replaced by a dome along with some other structural changes. The church would undergo many architectural developments over the coming centuries, including a Renaissance transformation, and later, a Baroque overhaul.

Currently, the nave (the central part of the church stretching from the main entrance to the transepts) is 63 meters long, 10 meters wide, and 16 meters high. At the end of it stands a great marble altar. Additionally, there exists 10 side altars located along the length of the basilica. The vault of the church features painted motifs of the Blessed Virgin Mary painted by Neunhertz in 1774, and the walls of the nave portray frescoes celebrating the life of St Norbert.

The Baroque style structure is considered to be the oldest part of the library and features over 18,000 volumes of literature stored vertically in wooden bookshelves—reminiscent of the Baroque library concept of storing books upright. According to the monastery, there are carved, wooden cartouches above every bookshelf covered in thin, gold paint. These decorations display pictures that directly correspond to the type of literature stored on the shelves below. Frescoes featuring bible proverbs are on display at the library.

The second library was built toward the end of the 18th century in an effort to contain the numerous new additions to the library. Built in the Classical style, it features original hand-carved walnut bookshelves. The ceiling displays numerous frescoes painted in 1794 by Viennese painter Anton Maulbertsch. The pictures represent the development of science and religion and their mutual impact on each other. The motifs serve as a reminder that the basis of true wisdom is found in religion. The progression of humanity is displayed through depictions of important figures including Adam and Eve, Moses, Noah, and leading to the development of Greek Civilization, the arrival of philosophers Socrates, Diogenes, and Democritus.

Skylar Parker
Follow
Skylar Parker covers health and lifestyle for The Epoch Times. She has written for Radiant Life and American Essence magazine. She graduated with a bachelor's degree in Media and Creative Writing in 2018. Skylar is passionate about tea, nutrition, nature, psychology, and the arts.
SHARE
Friends Read FreeCopyFacebookTweet
You May Also Like