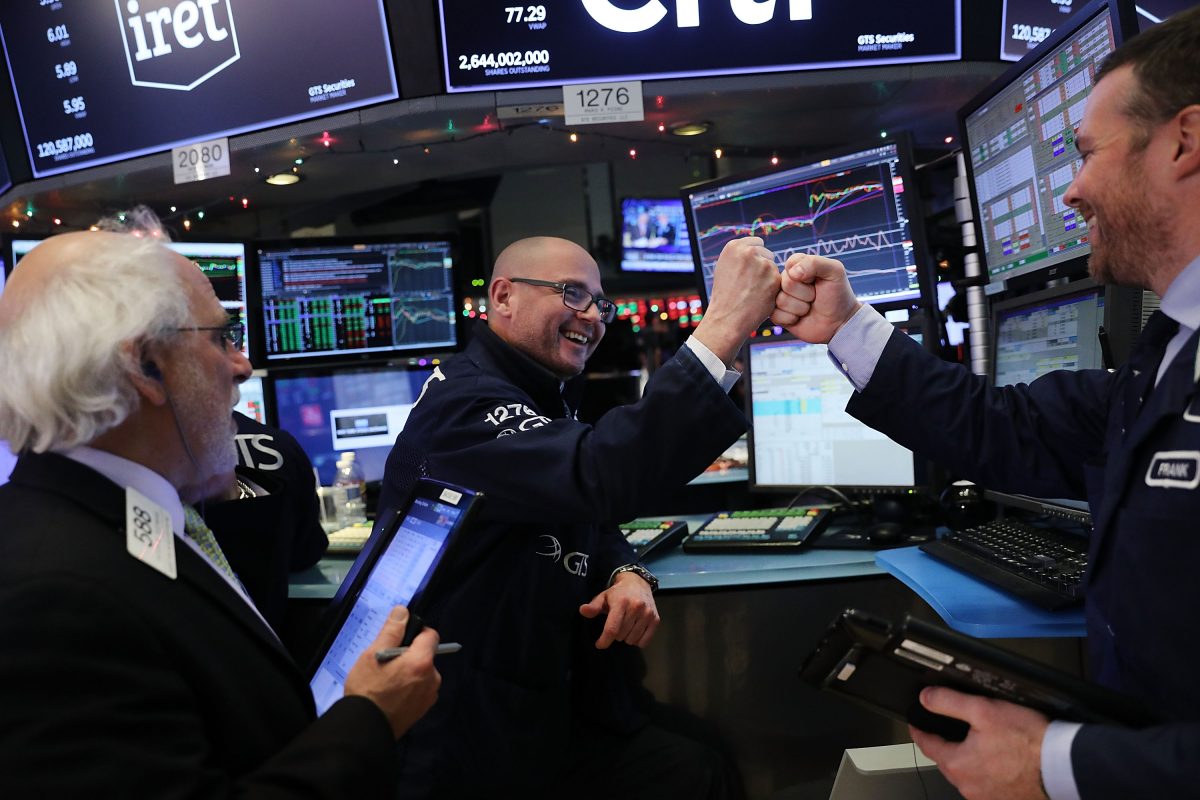 Traders work on the floor of the New York Stock Exchange at the end of the trading day on Dec. 4. 2017 has seen 70 new record highs in the stock market, the most ever. (Spencer Platt/Getty Images)
Stocks

2017 has been a banner year for stocks. The next question becomes, can stocks keep going up in 2018? The consensus among analysts is yes, but not to expect a repeat of this year’s performance.

Stronger-than-expected economic growth has helped companies deliver on earnings, which have powered impressive returns in the stock market, says Turnill. This narrative remains mostly valid for 2018; however, economists expect advanced economies to grow more slowly in the coming year.

The world economy has never been in better shape, according to Deutsche Bank’s chief international economist Torsten Slok, who notes that this is a time in which the fewest countries are in a recession. While stocks don’t necessarily move in lockstep with the economy, the macro picture looks rosy for more stock market gains.

Low volatility underscores the conviction among investors that the current environment of modest growth and tepid inflation is here to stay, according to Vanguard’s outlook for 2018.

The wildcard is U.S. tax reform, which is gradually getting priced in by markets. J.P. Morgan anticipates a bump of US$10 to S&P 500 earnings. The investment bank also has one of the highest 2018 year-end forecasts for the index, at 3,000—roughly a 12 percent gain over the next year.

One of the benefits of corporate tax cuts is companies using the added funds to invest in their businesses. Business investment hasn’t climbed in line with the economic recovery, but Vanguard thinks capital investment will play catch-up in 2018.

“This is the stage of the [business] cycle where we see the fastest pace of business capital investment,” according to Vanguard.

This would be especially good news for the Canadian economy, which got crushed when business investment dried up after the sharp drop in oil prices in late 2014. Canadian stocks have lagged gains in developed markets around the world in 2017.

The synchronized global recovery narrative really took hold in 2017, and more major central banks joined the U.S. Federal Reserve in raising rates. The Bank of Canada raised rates twice and the Bank of England raised rates for the first time in 10 years in 2017.

“What’s different now compared to the past five years? The answer is that with stronger global growth, economies are reaching full capacity, and that is by definition when inflation pressures begin to appear and hence when central banks begin to exit [accommodative policy],” said Slok in an email to clients.

TD Securities feels the economic stimulus of the US$1.5 trillion in tax cuts is likely to be limited, but inflationary. “We also see a somewhat higher risk that it will boost inflation than it would raise potential output over the next several years,” according to a TD note to clients.

Inflation has been slow to react to the improvement in labor markets and economic growth, but many feel that 2018 is the year this will change. Markets still have their doubts about inflation as advanced economies haven’t had to deal with consumer price inflation since the 1990s.

Certainly, the Fed and Bank of Canada felt the need to take action to prevent inflation from rising too far above the 2 percent target at some point in the future. Central banks don’t want to be “behind the curve” and forced to jack up rates aggressively.

Few Risks to the Outlook

Despite better-than-expected economic growth, low inflation was one factor holding longer-term bond yields little changed in 2017. This, along with rising short-term yields from central bank rate hikes, led to flatter yield curves in the United States and Canada. Given the flattening of yield curves, some chatter is arising about the next recession as a threat to stock market gains.

More ‘Goldilocks’ for US Stocks

Still More Upside for US Stocks in 2017, Say Analysts

But a recession couldn’t be further from the markets’ mind at this time. The spread between the 10-year and 2-year U.S. Treasury bond yields narrowed from roughly 1.25 percent to 0.65 percent during 2017. So there is still more room for narrowing before inversion of the yield curve. According to Bloomberg, the last five recessions since the mid-1970s started, on average, 17 months after the yield curve inverted. Double-digit declines in the S&P 500 ensued.

Slok also points out that it’s not Fed tightening that typically causes recessions. He noted that another important indicator is the widening of high-yield bond spreads. This was one of the precursors that signalled the last two recessions (2001 to 2002 and 2008 to 2009), and these spreads remain contained.

It may be unsettling to some that the consensus is near unanimity in its belief that 2018 will still be another good year for stocks. Rates are still low and monetary policy is still accommodative—and would still be slightly accommodative even after three more hikes—compared with the estimate of the long-run neutral rate for the U.S. economy at 2.75 percent.

However, the risk factor that materializes and sends the market for a correction can be something unforeseen.

What can be foreseen is the threat of NAFTA unravelling. This would likely necessitate a repricing in North American financial markets, unlike how geopolitical flare-ups have been summarily dismissed in 2017. In fact, the S&P 500 never even saw a 3 percent drop this year, according to BMO.

The story looks to be that equities again remain the place to be, for the time being. They certainly have a better case going for them than bonds do.

Rahul Vaidyanath
Journalist
Follow
Rahul Vaidyanath is a journalist with The Epoch Times in Ottawa. His areas of expertise include the economy, financial markets, China, and national defence and security. He has worked for the Bank of Canada, Canada Mortgage and Housing Corp., and investment banks in Toronto, New York, and Los Angeles.
SHARE
Friends Read FreeCopyFacebookTweet
You May Also Like