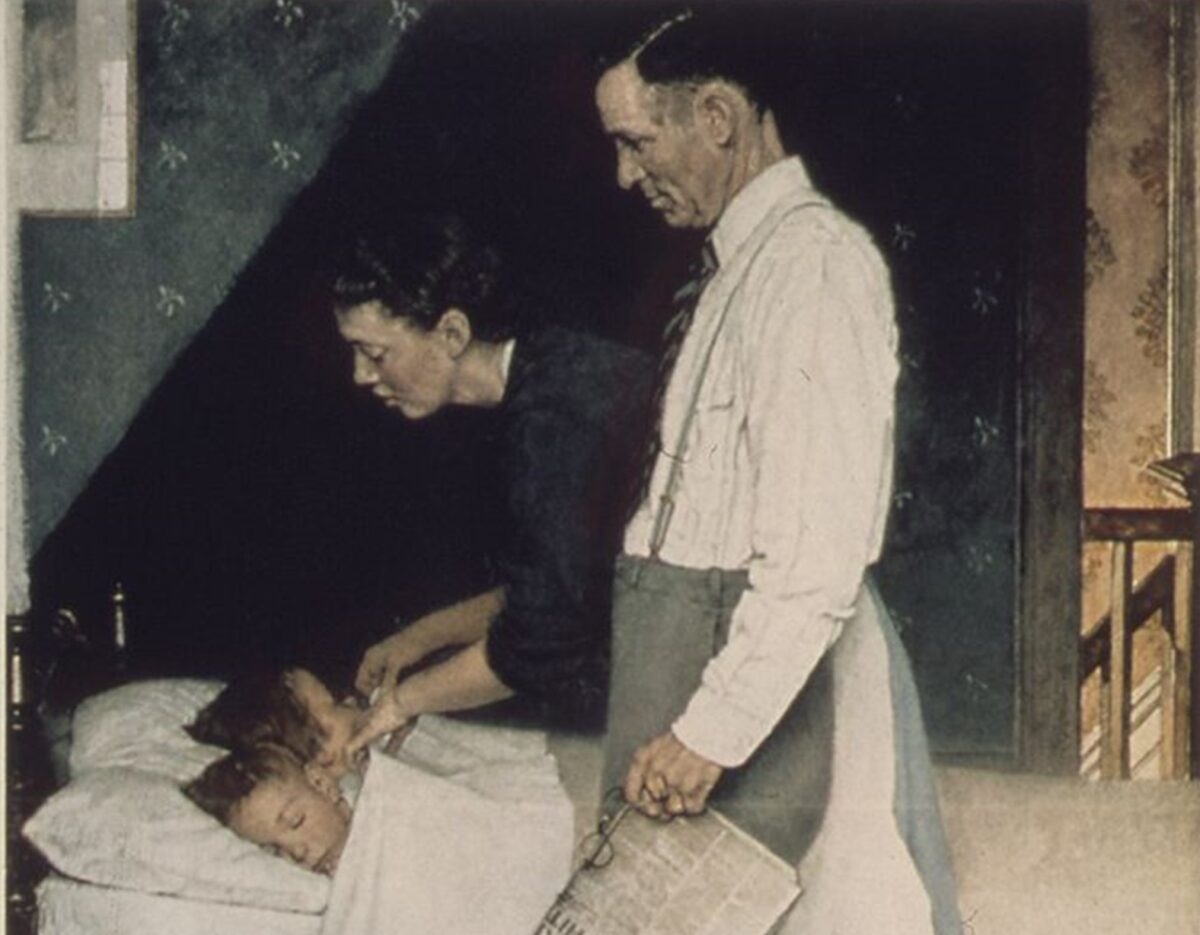 In Rockwell’s painting, we see a husband and wife tucking their son and daughter into bed. This picture seems to represent safety and comfort. The children look peaceful in a warm bed, a doll lies on the floor, a picture hangs on the wall, and a warm light shines from the floor below.

Yet fear still creeps into the painting. While he lovingly looks down at his children, the father holds a newspaper. Though we cannot see the entirety of the paper, we can piece together the headlines: “Bombing Kills” and “Horror Hits.”

Both Rockwell’s painting and Benét’s essay were written while World War II raged on in Europe. During the war, Benét expressed how fear ruled man:

“The fear of being stamped into the dust because [a man] is one kind of man and not another, the fear of unprovoked attack and ghastly death for himself and for his children because of the greed and power of willful and evil men and deluded nations.”

Fear in the Air

Benét said that since the Wright Brothers’ first airplane, the world became a lot smaller. Other nations and continents that were miles away from each other were now close neighbors. With the help of flight, all men were able to touch each other with an ease and quickness that was previously impossible.

In a much smaller world, it’s not enough that Americans made a free nation. We may breathe free air, but the “fear and ignorance a thousand miles away may spread pestilence in our own town.”

So long as we share the same air and the same world, the troubles that one nation endures will affect those around it. “While the air is still the air, a bomb can kill your children and mine,” Benét said.

Even though Americans might have wished to distance themselves and their families from World War II and the fear engulfing the world, they could not. War, famine, and disease are troubles that every man must face. The tyrannical forces that ravaged Europe, stealing the lives and freedoms of all those people, would not stop there. Those forces would try and steal the free American air, just as they stole the freedom of those in Europe.

Freedom from fear is “a thing to be won against odds” and is something that one man cannot win on his own. Only when we join together can we combat fear. We must stand against the tyrannical forces, governments, leaders, and evil men who continually try to steal our freedoms by implanting fear in our daily lives.

When we defend our freedoms, we send a message to our children, who are not “wrapped in cotton wool, too delicate to stand rough weather,” to take up the armor of God and to stand firm against tyranny.

Man has warded off fear from the first time he used fire. However, freedom from fear does not come from a single victory. Freedom comes when we continually use our words, acts, and deeds to live freely. By living for freedom, we fight fear.