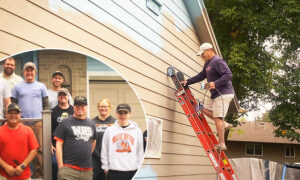 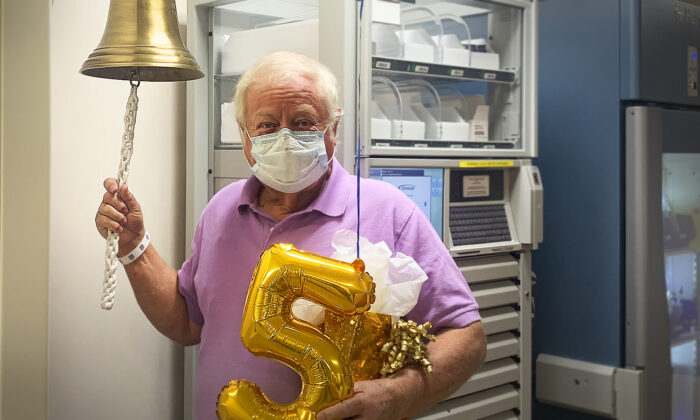 He is among only 3 percent of pancreatic cancer patients to make it this far.

In footage taken by TV news outlet KHOU 11, Groce, from Advance, rings the bell to a chorus of applause before addressing the team at Wake Forest Baptist Medical Center.

“Thank you all,” he says through tears. “Y’all are wonderful.”

“Not once did I think my protruding belly button was cancer, much less stage 4 pancreatic cancer,” Groce explained in a news release. “I’m thankful my daughter encouraged me to go to the doctor.”

After a strenuous drive home from Nevada in September 2015, Groce thought he may have had a herniated belly button, Wake Health reported. A CT scan and biopsy, however, diagnosed a cancerous mass known as a Sister Mary Joseph nodule. Tragically, it was already at stage 4 and had metastasized to Groce’s lungs, liver, and peritoneum.

His daughter, a surgical oncologist, connected Groce with experts at Wake Forest’s Comprehensive Cancer Center, leading him to enroll in a personalized clinical trial.

“Due to the advancement of Mr. Groce’s cancer, operating wasn’t an option so he enrolled in a clinical trial that had targeted therapy aimed at cancer cell metabolism,” said Groce’s primary oncologist, Dr. George Yacoub.

Groce has tolerated chemotherapy well for five years, which “isn’t typical” for pancreatic cancer patients, according to his doctor. “[M]ost patients have a much shorter survival,” Yacoub said, “but … it has provided him with more time and maintained his quality of life.”

The survival rate for patients to live five years with stage 4 pancreatic cancer is only 3 percent, according to the American Cancer Society.

Wake Forest Baptist’s Comprehensive Cancer Center is one of only 51 National Cancer Institute (NCI)-designated centers in the United States. Case studies have shown that NCI-designated cancer centers can improve long-term survival rates by up to 25 percent.

Groce’s story is one of hope for both himself and for others.

“In my career, I don’t recall anyone who has been diagnosed with stage 4 pancreatic cancer living as long as Mr. Groce,” Yacoub told Wake Health. “I’m so happy for him and his loved ones; he is a fighter and a beacon of hope.”

Very few people with his same diagnosis, Groce reflected, make it to where he is today. “I owe that to my wonderful healthcare providers, my clinical trial, and family and friends who have supported and encouraged me,” he said.