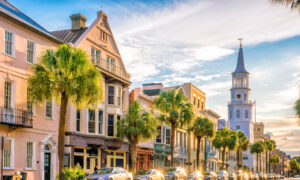 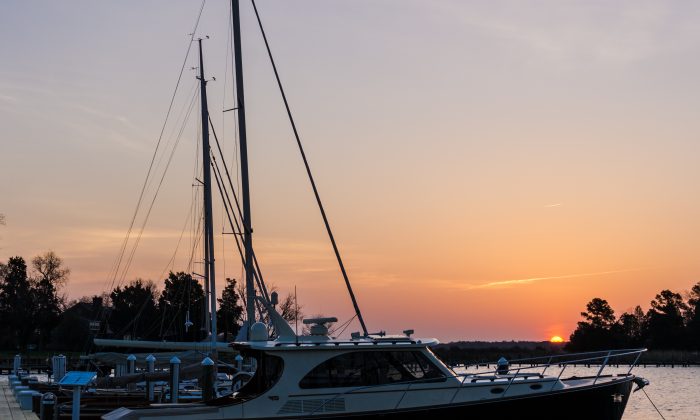 Once a hub of shipbuilding and seafood, St. Michaels now beckons with a slow and breezy lifestyle
By Crystal Shi
Print

ST. MICHAELS, Md.—On Aug. 10, 1813, cloaked in the early morning darkness, a fleet of British ships crawled up the Miles River and approached the small town of St. Michaels, Maryland.

It was the War of 1812, and the town’s many shipyards were churning out fast schooners used to slip past British trade embargos and privateer against enemy ships. But the thriving shipbuilding industry had put a target on the town’s back.

Fire! Cannonballs shot high into the sky—and soared straight over the town.

The people of St. Michaels had extinguished the lights of their homes and hung lanterns from the masts of ships and tall trees, misdirecting the British fire. The British retreated, and the town was largely spared.

Or so the legend goes, earning St. Michaels the nickname of “the town that fooled the British.”

In reality, the town was likely saved because the British fire was too weak, too slow, and too far away to have done any real damage, said Peter Lesher, chief curator of the Chesapeake Bay Maritime Museum in St. Michaels. The legend of the lanterns arose in the late 1900s, from the stories of the battle’s last living survivors. No contemporary sources support it.

At the same time, though, “you can’t prove there weren’t any lanterns,” Lesher said.

“The way I tell it, whether or not that happened, it tells you as much about the town, about how we choose to remember our history, and how we pick out our heroes, as what may have actually happened that day.”

Today, the ships that pull up to St. Michaels belong to dayboaters and vacationers. Once a hub of first shipbuilding, then oystering, the town’s economy now runs on a different water-propelled motor: tourism.

Perched on the idyllic Eastern Shore of the Chesapeake Bay, it’s a charming getaway, popular with boaters who sail in from around the bay and landfolk who brave the congested Chesapeake Bay Bridge alike. Tourists flock to its historic streets, well-preserved thanks to profits being pumped back into historical conservation efforts, to stroll, shop at the boutiques, and enjoy the shore’s breezy quality of life. Where shipwrights and watermen once crowded the docks, crafting sleek vessels or hawking freshly dredged oysters, visitors now lounge in the sun.

After the war ended, St. Michaels’ shipbuilding industry faded away, and the town slipped into a depression, becoming nearly defunct.

But it revived with the discovery of a new treasure trove: oysters.

Spurred by developments in canning technology and the transcontinental railroad, the oystering and seafood packing industries boomed. Money poured into the town, and much of it went into building many of the houses that still populate modern St. Michaels.

At the peak of the boom, from the 1880s to the early 1900s, there was either an oysterman or someone working in a seafood packing house in nearly every household in St. Michaels, Lesher said. Shipbuilding was revived, too, this time with bugeyes, skipjacks, and log canoes specialized for oystering.

“By and large, it is responsible for the St. Michaels that we see today,” Lesher said. “It really is what built the town.”

In some cases, it did so quite literally.

Walk along the edge of the harbor, and you’d be treading above oyster shells 10 feet deep. When the voracious industry ran out of room to grow, the byproducts of the tasty bivalves were used to create artificially filled land for seafood packing houses.

The same shells were used to pave the town’s roads, and still hold together some of its historic brick houses—“oyster shell mortar” was a popular building material, made by burning the shells to create lime, and then mixing it with sand and more crushed shells. (Many houses, however, have since been renovated; the now-crumbling mortar has a short lifespan.

After all, “you’ve got all these shells, so what are you going to do with them?” Lesher asked. The people of St. Michaels found creative solutions.

And when a series of bad harvests finally led to the oyster’s decline, the townspeople, by now masters of reinvention, didn’t despair for long. St. Michaels was reborn as a tourist destination.

Exploring the town’s historic haunts today, tourists can still catch whiffs of its past lives.

I join those legions of tourists—still modest in mid-April—for an afternoon stroll through St. Michaels. At just over one square mile, the town is pleasantly walkable; it takes me all of 15 minutes to make my way down its main drag, Talbot Street, at a leisurely pace.

It’s a picturesque path, lined with whimsical wood and brick houses painted in pastel yellows, bright pinks, and muted greens, with white windows and porches sporting hanging baskets spilling with flowers. A life-sized stuffed bear in a floral apron and wreath stands at the door of a gluten-free bakeshop.

The town features a motley of quirky antique shops, art galleries, and specialty stores, alongside old-school ice cream parlors (a refreshing lemon sorbet from Justine’s, a St. Michaels institution since 1987, is the perfect treat) and a few sit-down restaurants (the locals flock to Ava’s Pizzeria for its meatballs and caramelized onion pie).

Local artisans capture bits of the town’s character in their crafts. Ornaments are created from rhinestone-studded oyster shells, bracelets adorned with old strips of the docks (an artist shows me one with a nail hole in it), and necklaces hung with shiny sea glass wrapped in wire. The people of St. Michaels love repurposing materials, a shopkeeper winks.

As I venture into an open gallery, one of the shopkeepers, Joe, greets me at the door. He and his wife, Bonnie, sell their handcrafted sea glass and gemstone jewelry here at Flaherty House Specialties. As I peruse the glittering collection, he eagerly narrates, pointing out the different types of precious stones, their rarity and unique qualities, and the process of coaxing out their natural beauty.

The couple came to St. Michaels to manage a bed and breakfast for a friend, stayed three and a half years, and didn’t want to leave.

“Once you come here, you don’t want to cross the Bay Bridge again,” Bonnie tells me. So they bought a house in the nearby town of Easton, a 15-minute drive away, and settled down. (They couldn’t afford one in St. Michaels—Joe calls it a “boutique small town,” with its lofty property prices, welcoming a growing presence of vacation homes and tell-tale fleets of BMWs cruising the streets.)

The real appeal of St. Michaels, Bonnie feels, is its slowed-down pace.

“It’s a nicer pace. It’s a place where you walk down the street and you say hello,” she says.

Indeed, no one seems to be in a hurry to get anywhere. On a sunny Saturday morning, the town is lively with people meandering down the street in sunglasses and visors, chatting and walking dogs, or lounging about on cafe patios or in the multi-colored Adirondack chairs sprinkled along the sidewalks. The bright strums of a banjo complete the cheerful picture.

In the summertime, when St. Michaels floods with tourists and everybody takes to the streets, the town gets a real “Key West feel,” another local tells me.

Sailing is the perfect pastime for the slow and breezy lifestyle of the Eastern Shore. While the area’s history is moored in the shipbuilding and seafood industries, sailing for sport and pleasure has risen with the Chesapeake’s transition into a place to play.

At the Inn at Perry Cabin, a luxury hotel in St. Michaels, guests can take the resort’s sailboats and yachts out on the water for a day. A visiting couple strolls by the dock, where one of the inn’s captains is preparing a boat for an evening sail. Asked where he’s headed, the captain shrugs, “Wherever the wind takes us.”

I hop aboard Star Light, a beauty of a sailboat, as she kicks off the year’s sailing season. Making my way to the bow, I face into the wind and look to the shoreline in the distance.

Between the rippling of the water, the warmth of the sun, and the gentle sway of the boat, I can’t help but be lulled into relaxation. (It’s not all smooth sailing, though—kicking up the speed a few notches rewarded us with a healthy spray of bay water.)

Our captain, Bud, lets me try my hand at steering. Holding the tiller shakily with one hand, I swerve us back and forth for less than 10 seconds before he reclaims control. “Don’t quit your day job,” he quips.

But sailing really isn’t that difficult, he insists. It just takes us city folk some getting used to. Bud has been sailing since before he knew how to ride a bike; his grandfather took him out on the water for the first time when he was two.

It’s a very “zen” thing, he explains. “Once you become one with the boat and the elements and the energies, it’s not that hard.”

“One ship drives east and another drives west
With the self-same winds that blow;
‘Tis the set of the sails
And not the gales
That tells them the way to go.”

“Like the winds of the sea are the winds of fate
As we voyage along through life;
‘Tis the set of the soul
That decides its goal
And not the calm or the strife.”

The Inn at Perry Cabin by Belmond

Like the rest of St. Michaels, this 200-year-old waterfront resort is steeped in maritime history. It began as a manor house built and named in honor of Commodore Oliver Hazard Perry, who led American naval forces to a decisive victory against the British at the Battle of Lake Erie during the War of 1812. The manor was designed by Perry’s aide de camp, Samuel Hambleton, in part to resemble Perry’s cabin on his flagship “Niagara.”

Since then, it has passed through multiple owners, renovations, and identities: a family home, a riding academy, a small country inn, and now a 25-acre luxury hotel, with all the historic charm of its past lives.

But to stay indoors, although tempting, would be a shame. The property is bordered by picturesque paths through manicured gardens and along a sparkling waterfront, sprinkled with swinging benches, charming gazebos, and plenty of Adirondack chairs for lounging. A private dock houses the inn’s fleet of sailboats and performance yachts. Wake up to a soft sunrise over the river, and cap off the evening cozied up around an outdoor firepit, watching the captains retire the boats for the day.

In between, take sailing lessons or hop on a chartered cruise, go kayaking or hit a few rounds at the brand new tennis courts, or indulge in a botanical treatment at the Linden Spa. Dine on local, seasonal fare with views of the waterfront at Stars, the inn’s award-winning fine-dining restaurant, and for the best crab cakes in town—and in the state, a bartending Maryland native insists—look no further than Purser’s Pub.

Links at Perry Cabin, an 18-hole championship golf course designed by the legendary Pete Dye, will open to guests in June.

Rooms from $280 per night. Belmond.com