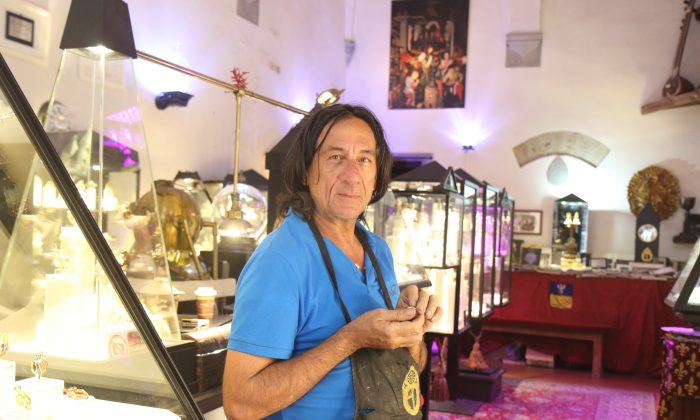 Spirit of Gold: The Heart of Alessandro Dari’s Jewels

FLORENCE, Italy—Wonder is what greets you at the workshop of artist Alessandro Dari, a childlike wonder that conjures up curiosity and questions, lots of questions. Before even entering the Nasi-Quaratesi Palace, awe naturally inspires you to contort your neck to look up at the 15th-century stonework where, between fluted pilasters, pairs of putti (naked baby boys) hold wreaths over the upper windows. Under the pilasters, putti festooned with foliage are showcased on a frieze. Two red heraldic flags flank the entrance.

As you stand on the red rug at the building’s entrance, it seems like you are on the threshold to another world. The faint jingle-jangle of a jeweled music box tempts you further into Dari’s shop, museum, and workshop.

This is a place where the workshop and its creations sit side by side. Display cabinets, designed by Dari himself, house hundreds of jewels, all forged by his hands. The planes of the cabinets’ pyramids pull you into the shop, like a painting’s perspective eases you into its action. It’s like walking into a treasure chest. Crosses and candles are featured in corners and in little alcoves; musical instruments such as harps and bells are hung up high, and pots of colored chemicals line the workshop wall to the right.

Round medieval-style lamps gently light Dari’s workshop, where tools have been cast aside haphazardly, ready to be used when inspiration takes hold. Many different materials frame his workbench, all at arm’s length to be grabbed when needed. Metal forms and wax molds can be seen in various states of design, and colored gems and stones wait in their boxes, ready to be selected and set.

Dari works literally on the same ground where Raphael and Michelangelo once walked. Raphael’s painting “Madonna of the Goldfinch” (circa 1506) was found in the building. Michelangelo and Raphael were friends of the Nasi family, who previously owned the building, and the painting was a wedding present for the family. The restored painting now hangs in The Uffizi Gallery across the river.

In 2001, Dari’s workshop was awarded the honor “Museo Bottega” (Museum Workshop) by the Italian Ministry of Cultural Heritage and Activities. And just as in any traditional bottega (workshop), Dari teaches. He’s an honorary lecturer on jewelry at the University of Florence. He’s also been offering courses in his workshop since 2014.

His work can be found in Florence’s prestigious Silver Museum (Museo degli Argenti), and in 2006, he was appointed the Vatican’s chosen artist.

Dari’s art is forged through his strong spiritual faith, which underpins his designs and his philosophy. Here, he shares a bit of both.

The Epoch Times: What do you want people to know about craftsmanship?
Alessandro Dari: My art can share a world, a spiritual world. Every spiritual world of every person is beautiful, so collectively, it is something that we shouldn’t lose.

The Epoch Times: Please tell us about your job.
Mr. Dari: There are two parts: The technique part is more like an artisan’s work, but the creative process is the work of the artist. I can’t define myself as anything, because to define myself with a kind of identity is the death of the real identity.

In the Renaissance, the three arts were united in the workshop of the artist. You could learn how to sculpt, to paint, and to be a goldsmith. Now, this no longer exists.

So the artisan learns to do 20 things, and for his entire life, he does those 20 things. The artist always tries to find something new to do, because he always feels something new: new collections, new forms, new everything.

This is like the difference between Beethoven and Bach. For me, Bach is the best.

The artisan can learn and use a technique, but the artist is different because he learns a technique, yet he also feels the technique, and understands it. Without technique, you can’t do anything. If you play Bach, your technical ability has to be perfect, otherwise you can’t give that sound.

Now, when I make a jewel, I draw the design and then make it without thinking about the technique. It’s as natural as drinking water for me.

The Epoch Times: How did you come to make jewels?
Mr. Dari: When I was 5, I started to carve in wood, and for many years I made things in wood. Then when I was 10 years old, my family moved to the Tuscan coast, where I began to sculpt in marble.

But everything really started when I was 12 years old. I was playing in a fountain in Siena, and I found a ring. When I wore that ring, I felt that I knew all the things that I had to do in my life.

I see the jewel as a form in and of itself. It’s a sculpture that is meaningful on its own, beyond its price tag or needing the addition of precious stones and metals. The form can also simply be a stone.

I first made jewels based on architectural forms, and then anatomical forms. My favorite pieces are the mechanical jewels, and the first mechanism I made was the music box that plays Bach. That is my masterpiece, my life’s work. It’s constantly evolving; I add new pieces all the time.

The Epoch Times: How did you start working for the Vatican?
Mr. Dari: This is only my second or third commission because I don’t normally take commissions, only commissions for the Catholic Church. The first Vatican commission was a ceremonial chalice made for the Florentine churches. Then the Vatican asked me to do another chalice, and after that commission, they announced me as the chosen artist of the Vatican.

The theme of the first chalice was the Resurrection. It was difficult, because to explain and to create the Resurrection, I felt that I myself, as an artist, had to resurrect from something. For a period of time, I stopped working on the chalice because I wasn’t able to feel that idea of the Resurrection. After a while, I heard a voice that said, “Life or death, it’s the same thing.” That’s when I felt I could start work on the chalice again; I felt I, myself, was reborn.

The artisan makes the chalice through hard work; the artist has to put his soul into the material as it’s difficult to explain something you feel, and something that cannot be touched. There is an understanding that the artist is—not always, but most of the time—he is suffering. As an artist, you can never create something in the same way each time, because you are not the same person; you don’t have the same feelings every time.

The Epoch Times: How did you train to be a goldsmith?
Mr. Dari: Nobody taught me. I taught myself. In the 1980s, I studied the Etruscan technique, an ancient technique for making jewels, which originated about 2,700 years ago. The Etruscan technique is to jewels what Bach is to music; they both influenced everyone who came after them.

I started to study when I was about 16 years old, and I started to make jewelry by using that technique at around 20 years old.

The Etruscans saw women as sacred, so even poor women had jewels. It didn’t matter if the jewel wasn’t precious; every woman deserved a jewel. Etruscan jewels were made for their beauty, which is different than in Roman times, when jewels were linked to religion, myths, and goddesses.

Byzantine jewels are a mixture of the Etruscan style and the Orientalist style of jewelry. Byzantine jewels seem to be made for repentance; the fear of God is within each form. For a Byzantine jeweler, you had to create something good, as God would judge you. So you have that angst, and you had to be correct.

The Epoch Times: How is your jewelry made from start to finish?
Mr. Dari: There are different ways to make the jewels: in metal or with wax. With the wax, every little detail of the jewel you sculpt in the wax, then the wax is put in plaster to form a mold, and then you add the metal into the plaster to cast the jewel.

The metal jewel is then refined by smoothing or sculpting it. The very last thing is adding the stones; these are only for color, not because they are precious stones. They give that little bit of color to the form, to unite or to divide a piece. An artisan works differently; he creates the jewel around the stone.

The Epoch Times: Why is it important to keep traditions alive?
Mr. Dari: Because the story of our people is the story of the people who were here before. So that is our foundation. Tradition has to be lived and repurposed, and we have to keep it alive. So, a form made by traditional methods allows us to see, and gain knowledge from that time. So the form then allows other things from 1,000 years ago to live again.

The Renaissance and Gothic periods are an entrance that lets everything reach the soul to keep it alive.

Ms. Aristea Pazaj acted as Mr. Dari’s translator from Italian to English. This interview has been edited for clarity and brevity.