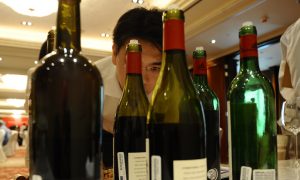 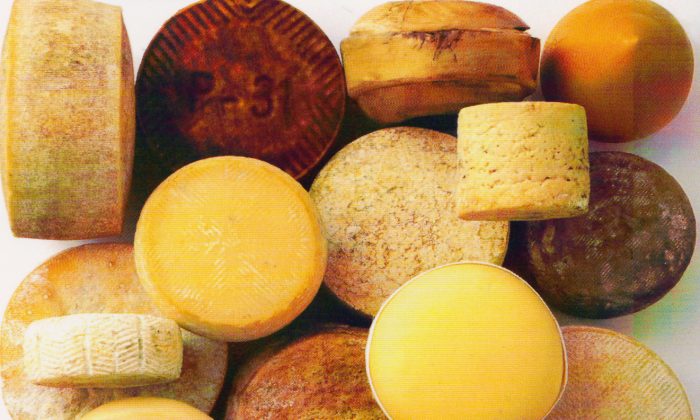 An assortment of Spanish cheeses. (Cheeses of Spain)
Drinks

Spanish Wines and Cheeses: Matches Made in Heaven

Spanish cheeses and Spanish wines are a match made in heaven. Add a fresh baguette or other freshly baked crusty bread and perhaps a bunch of grapes, and you will have an unforgettable repast.

“Cheese and red wine have natural affinities for each other,” James Beard wrote in the 1949 edition of “The Fireside Cookbook.”

Indeed, there is a remarkable affinity between wine—both red and white—and cheese. That’s partially due to the fat content and saltiness of cheese and the acidity and hints of residual fruit sugar of wine. And yet, the affinity is not absolute. Strong cheeses can obliterate delicate wines, and tannic, oaky red wines can neutralize the nuanced flavors of complex cheeses.

Manchego is the Spanish cheese best known beyond Iberian borders. It is a semi-hard, very flavorful cheese from La Mancha made from sheep’s milk. It is slightly oily on the palate, piquant with a very long finish and a mild aftertaste of nuts. The interior is dense with tiny holes and light straw-yellow coloring. It can be aged from 3 to 14 months and the older it is, the more assertive it becomes on the palate.

Garrotxa is an artisanal product made from goat’s milk. It is a semi-soft cheese that has a light grayish-blue rind coloring from mold, as it is aged in caves. It is mildly acidic with an earthy flavor, a firm texture, and an ivory-colored interior. Delicate, with a hint of nuttiness and a clean, smooth finish, it pairs very well with cava and other sparkling wines.

Idiazábal is a pressed hard cheese made from unpasteurized sheep milk in Navarra and the Basque region. It has a smooth and hard natural rind that is medium amber to light nutty brown in color; the interior is pale beige to medium ivory. It is dry, but not crumbly, and feels pleasantly oily in the mouth. The characteristic lightly smoky flavor results from the cheese wheels being stored by the fireplace of mountain huts where the cheese is made. The taste is suggestive of burnt caramel.

The name Tetilla (Galician for small breast) describes the shape of the cheese: a cone topped by a nipple. It is produced in Galicia from cow’s milk. The cheese has a pale yellow, thin, natural rind or sometimes no rind at all and is soft and quite spreadable. The texture is soft and smooth with scattered small holes. Yellowish ivory in color, Tetilla has a creamy mouth-feel with buttery, slightly tangy flavors. In Galicia, it is often served with fresh black figs (when figs are in season) or cubes of membrillo (quince paste).

As a general rule of thumb, it was customary to serve a cheese course after the meal for the cheese to be consumed with any wine that might remain in the decanter, especially when dining in a more formal environment.

In an informal setting, mezze, tapas, canapés, or cicchetti that contain both cheese and charcuterie elements are served together with a glass of wine or an anise-flavored spirit, like ouzo or arrack, in most of the countries bordering the Mediterranean.

My trips to Catalonia, Zaragoza, and the Basque area affirm that the better Catalan and Spanish wines pair very well with the classic cheeses made in Spain. These cheeses are offered in practically every tasca, cerveceria, tapas bar, or café you visit in Spain: Tetilla and San Simón from Galicia, Cabrales from Asturias, Manchego from La Mancha, Garrotxa from Catalonia, Zamorano from Castille-Leon, Idiazábal from Navarre, and Ibores from Extramadura.

All of them make their presence known alongside the glasses of sparkling cava or vermut or fino as well as the tempranillo, garnacha tinta, and Cariñena blends that many of the bars offer.

The following wines worked exceptionally well with aged Manchego, when we had cheese and assorted tapas during my Catalonia visit.

– 2010 Embruix de Vall Llach made from young vines, 6 to 12 years old. Embruix is Catalan for bewitching and, indeed, this wine was bewitching with its aromas and elegant power.

– Jose Ordoñez, Torre Muga, a blend of 75 percent tempranillo, 15 percent mazuelo, and 10 percent graciano, is aged for 6 months in wooden vats, 18 months in new French oak barriques, and at least 12 months in bottle, prior to its release. It is a Rioja, not a Catalan wine, but I had the bottle in a Barcelona wine bar. Actually, the bottle was of the 2005 vintage, which meant that the wine had aged for a number of years in the tasca and paired beautifully with my Manchego and slices of quince paste. It had a dense purple color with crimson highlights, with a mineral and spice palate and aromas of lavender, black cherry, and blackberry.

– Formiga de Vellut, a blend of garnacha negra, Cariñena, and syrah. The wine I tasted had a bright cherry red color, and complex aromas of mature red fruits with bright citrus notes and a touch of leather. It was good with the hard Manchego but also tasted very good with the softer and milder Tetilla.

Three indigenous varietals—macabeo, parellada, and xarello—are mostly used to create cava, a traditional méthode Champenoise sparkling wine from Penedès and Empordà. And a mature Garrotxa, a soft, creamy, goat’s milk cheese with a taste of fresh mushrooms, walnuts, and a touch of hazelnuts, pairs very well with cava and still wines made from either one or a blend of the above mentioned varietals.

Many sparkling wines (cavas) are produced in Catalonia. Most of the vineyards that produce the sparklers are in the shadow of Montserrat mountain, well protected from the cold winter winds.

– Juvé & Camps is one of the most highly regarded cava producers, with some 450 hectares of vineyards in Penedès. One of the cavas they produce is Milesimé Reserva, made only in exceptional vintages from the free run juice of chardonnay grapes from their oldest vineyard. We tasted the Milesimé with Garrotxa and Tetilla, and the pairings was exquisite. But I think the best pairing was when we tasted another Juvé & Camps cava, Cinta Púrpura Demi-Sec Reserva, a non-vintage, slightly sweet cava that made an excellent point and counterpoint to the salty and flavorful cheeses.

– Agustí Torelló Mata is in my opinion the ultimate cava producer. Their best cava, Cava Kripta Brut Nature, started as “an idea to produce an extraordinary cava, like no other product.” And Kripta is the pinnacle.

We had Kripta at the three-Michelin-star Can Roca, during both my 2012 and 2014 Catalonia visits. In 2014 the Kripta was paired with a timbale of Roasted Apple and Duck Liver with Vanilla Oil. And, as this is my favorite cava, I’ve been pairing it at home with Manchego, Zamorano, and San Simón. Exceptional!

– Gran Claustro, another classic cava, is produced by Castillo Perelada, arguably a major cava producer in Empordà. This cava is aged in the convent cellars that adjoin Perelada Castle, the same cellars used by Carmelite monks to age wine over six centuries ago. Some of the Castllo’s reds, though, such as La Garriga, a single vineyard red made from Samsó grapes, are light enough to pair well with fried fish and seafood dishes and definitively with Garrotxa and Idiazábal.

Another winery that I visited during my last trip was Vins de Taller, a winery with vineyards in Suirana d’ Empordà. The winters are mild but the summers are hot, with scarce rainfall. The heat is often moderated by the sea breeze.

The wines are organic; patience and time play a major role in creating these exceptional wines. And all the red wines they create paired beautifully with robust cheeses, including the above-mentioned Manchego, Ibores, and Zamorano, but also with Stilton and Roquefort. And neither the cheeses nor the wines are overshadowed by each other’s complexity and nuances.

During a vintner’s lunch with Michel Rolland, the famous consulting oenologist and his partner Javier Galarreta to introduce us to R&G wines, three classic Spanish libations and the fruit of their cooperation in Spain, we tasted two vintages of a very good 100 percent verdejo wine from Rueda. It was highly aromatic and fresh with tropical fruit, melons, and considerable minerality though the 2013 wine was more balanced and had better acidity than the 2012. At the end of the meal, I paired the 2013 with a San Simón cheese, and the smoky, buttery cheese paired beautifully with the fresh, aromatic, easy drinking wine.

Where to Find Spanish Cheeses

Murray’s carries some exceptional Spanish cheeses. They have two stores in Manhattan in the West Village and at Grand Central Station, plus (outside Manhattan) in-store stands at select Kroger stores (MurraysCheese.com).

Manos Angelakis is a well-known wine and food critic based in the New York City area. He has been certified as a Tuscan wine master, by the Tuscan Wine Masters Academy, as well as being an expert on Greek, Chilean, and Catalan wines. He judges numerous wine competitions each year and is the senior Food & Wine writer for LuxuryWeb Magazine, LuxuryWeb.com.