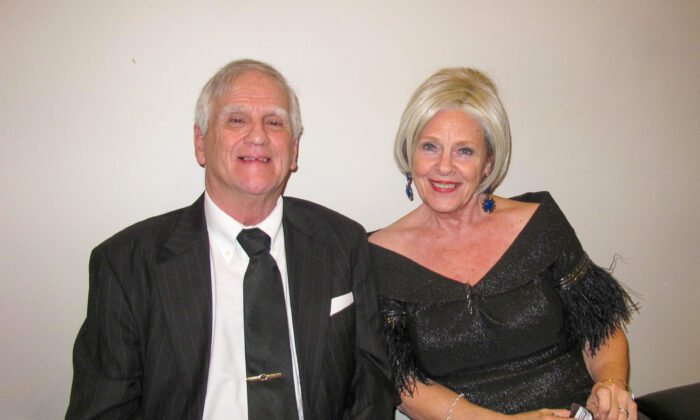 COLUMBIA, S. C.—John and Lisa Mello of South Carolina are no longer in the workforce, but they certainly haven’t stopped learning. They took in a production of Shen Yun Performing Arts in Columbia, South Carolina, on March 4, 2020, where they gleaned exciting new knowledge of Chinese culture and beliefs.

“I enjoyed the [Shen Yun] show,” John said. “It was wonderful. All the colors and all that is really exciting and I just loved every minute of it.”

“We’re learning a lot, yes,” Lisa chimed in. “Informative. We didn’t know there were so many different cultures and different—folk dance, and this dance, and that dance, you know, and different regions of the country [China].” The Mellos attended New York-based Shen Yun at the Koger Center for the Arts.

“It’s nice to know the history of the Chinese,” John said.

“Wonderful. Wonderful,” he added, in response to learning that traditional Chinese culture is inspired by divine beings and includes spiritual disciplines such as Buddhism, Taoism, and Falun Dafa.

“I could follow the meaning behind everything and I was curious about some things I didn’t know and didn’t understand,” said Lisa, about the heavenly scenes and spiritual references in the production.

The couple, he, a former water representative for the City of Columbia, and she a former property rental owner and executive recruiter, hit on the very nerve center of Shen Yun’s mission: to revive authentic Chinese culture and share it with the world.

Hearing about Shen Yun’s lofty aim, John expressed his appreciation for it: “It’s very good. I enjoyed it.”

Lisa agreed and added that the mission is “very important.” “And, the young people they haven’t learned all that, I’m sure. They haven’t experienced all that.”

But out of the many layers and elements that make up a Shen Yun performance, it was perhaps the artistry that touched the Mellos the most.

“I just love that. The dance part, the music,” she said.

“I love the show. It’s very emotional,” Lisa explained. “I love the colors, the movements … and the music. The orchestra is just wonderful. I’m enjoying the music. I would love to see [Shen Yun] again and again because I’ve been waiting for two years to see this show. Very excited about it.”

Shen Yun has grown to include seven touring companies, all based out of New York, and each one with its own live orchestra comprised of Western and Eastern instruments. Each year, Shen Yun’s artistic director composes all new music for the performance, which blends the two musical traditions into one uplifting and pleasing sound experience.

Shen Yun is innovating in other ways, too. It holds a patent for its digital backdrop technology, an aspect of the performance that the Mellos thoroughly enjoyed.

“We were fascinated with the part that they just leapt right off the stage and went into the background. It was amazing!” Lisa said.

But Lisa’s face lit up the brightest whenever the discussion turned to the dancers themselves.

“I was so impressed with what I read on [Shen Yun’s] YouTube [channel] and saw with the actual discipline and the things they have to do with their body to train,” she said. “Because I saw them bending over backwards and it blew my mind! I saw them bending over backwards over and over and over. I’ve never seen that in my whole life! The dancers are very disciplined and it’s very impressive what they go through to be in the show.”

With reporting by Brett Featherstone.