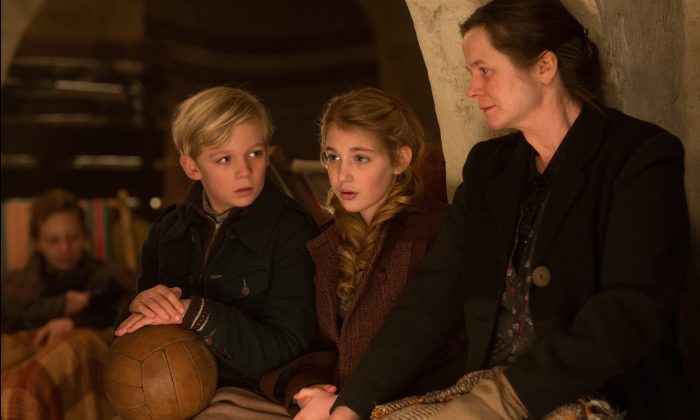 Called up to the blackboard of her new school, and ordered to write her name, little Liesel chalks up three X’s. “Dummkopf!” shriek her classmates, during recess.

It is partially due to this illiteracy that the book thief (Liesel) thieves books. But she’s no shrinking violet, this Liesel, and promptly pounds the ridiculing recess ringleader.

Based on the international bestselling book, the sweet, if overly long “The Book Thief” tells the tale of Liesel Memminger who was sent to live with a foster family in Hitler’s Germany, when her communist mother was sent to the death camps.

The main two reasons to see The Book Thief are new French-Canadian talent Sophie Nelisse, and the unpeered Geoffrey Rush.

We meet Liesel on a train, where her brother dies in her mother’s arms. While burying him in a grave near the train tracks, a man present at the burial unknowingly drops a book. Liesel surreptitiously absconds with it.

She meets her foster parents whom she later describes as “A man with an accordion heart, and a woman cloaked in thunder.”

Hausfrau Rosa (Emily Watson) is a terror on the outside, calling everyone “Sau-mensch!” (Pig-person!) But deep down she’s a softie.

Husband Hans is a tousle-headed musician with a heart of gold, played to twinkle-eyed, hangdog perfection by Rush.

In the move’s best scene, Hans suggests to his new, bullied-at-school daughter that they learn to read her new book together, since he’s not too good at reading either.

After they painstakingly work their way through the book, Hans proclaims solemnly (twinkle, twinkle) that when he dies, Liesel must make sure the proper procedures are observed in accordance with their newly acquired expertise regarding the burial process.

He also turns their basement into a magical wrap-around blackboard, with enormous letters of the alphabet, under which she can write down her favorite new words.

Around about the time of the unholy “Kristallnacht,” the family takes on a new guest, Max, a Jew and friend of the family (Ben Schnetzer), to whose family Hans is indebted for his life, and hide him in the basement. Liesel later describes him as the “Boy who lived under the stairs like an owl with no wings.”

At school, Liesel’s best friend and hopeful seeker of a kiss from her, little tow-headed Rudy (German child actor Nico Liersch) supports her in all endeavors. At one point he dives into a wintery river to retrieve one of her lost books.

Liesel’s family does laundry for the local Bürgermeister (mayor) whose lonely wife Else reveals to Liesel her secret library, which is, of course, heaven to the child. But the Bürgermeister is suspicious and they lose him as client, now needing to make do with two meals a day to accommodate the wingless owl under the stairs.

At Christmas, they bring in lots of snow to the basement and have a snowball fight and a Christmas snowman. Even verklemmt Rosa joins in the fun. Max gives Liesel a journal to write in. Liesel thinks it’s the best Christmas ever. They’re all freezing.

Over the next six years Hitler rises, former friends-turned-Nazis bring terror in the form of basement inspections (harboring Jews is a sure death sentence). Hans eventually gets conscripted to the war effort.

This wonderful movie, accompanied by an Erik Satie-like score, is especially wonderful for ten year-olds, and not bad for adults either.

It is, however, a story set in WWII so it does not have the happiest of endings. The entire movie is narrated by the unseen voice of that scythe-holding, black-cloaked character. Much like the ending of 1992’s “A River Runs Through It,” where Craig Sheffer as Norman Maclean says, “I am haunted by waters,” so also does the scythe-holder say, “I am haunted by humans.”

May young Sophie Nelisse haunt us for many movies to come. Bravo.