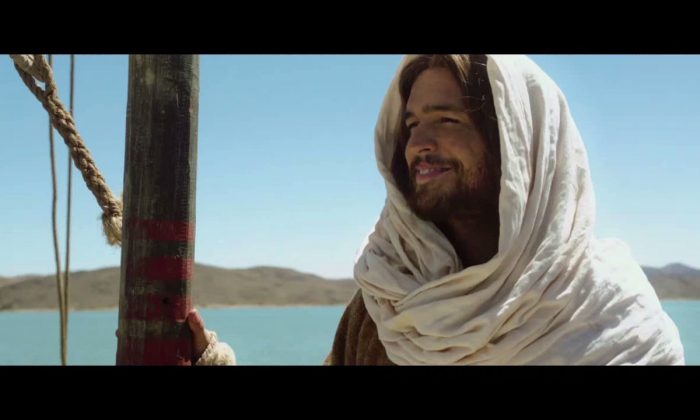 They found him. The glowing-eyed Jesus of a billion American refrigerators, that is. He was living in Portugal.

Once that guy’s been found, you have to make a Jesus movie. And so they did.

The filmmakers clearly had the best of intentions, but alas, this is a paint-by-the-numbers, connect-the-dots telling—a strolling through the New Testament’s greatest hits.

Some say the only art that’s worthwhile for the good of mankind is works that depict gods. From that perspective, “Son of God” beats every other movie released this year.

Originally, theater consisted of mystery dramas and church services. Then it migrated out onto the church steps, and from there down into the villages where it turned into secular theater. Now we have horror and slasher films. And pornography. These do not uplift humanity. But “Son of God” tries.

It starts with a quick, Old Testament greatest-hits prequel à la “The Lord of the Rings”: Adam, Noah, Moses, etc. Then we move on to a little bit of Genesis recitation from the Gospel of St. John, followed by the Three Wise Men.

Finally we get to Jesus. Diogo Morgado, Portuguese model-actor. Born to play Jesus. That face! And there was much beatific smiling. Sometimes beatific smirking.

Here, Jesus is portrayed as the original hippie rock star. When it’s mentioned that his presence will draw such a crowd it’ll overrun the festival (of Passover), it sounds like they’re talking about Jim Morrison coming back from the dead and headlining Bonnaroo. With all the alternative, large-gathering shenanigans that entails.

When Jesus speaks, it reminds the reviewer of what his former hairdresser once said of singer Marc Anthony: “He’s always kuh-rye-ing.”

This is apt. Pretty much everything Morgado’s version of Jesus says—there’s some crying happening. As famous acting coach Allen Savage always said, “Someday I’m going to write a book: ‘Acting is not crying!’”

The St. Mark Gospel story of the sick man being lowered through the roof is portrayed in about three seconds. That’s all we get.

McCowen brought vividly to life Christ’s outrageously powerful healing powers. Christ was constantly mobbed by a “fan-base” so thick that it was hard to get near Him, so they had to rip the roof off a house and lower a man down on a stretcher to be healed.

This is the kind of in-depth insights into the mysteries surrounding the life of Jesus that are not portrayed here. This is not a film for people seeking deeper answers.

It’s a film made for believers, by believers, which is fine. It’s a family film. It’s debatable, though, whether it should be seen by children under the age of 10.

Probably Mel Gibson’s “The Passion of the Christ” set the all-time record for most horrendous whipping-post scourging and cross-nailing violence.

“Son of God,” however, is a close second. The Golgotha-bound, cross-bearing ordeal is perhaps even more painful.

Happily, also in comparison to Gibson’s movie, the Pharisees are not depicted in the same rabidly anti-Semitic manner.

Here, it’s more from the perspective of an ancient order adhering to ancient laws, outraged about blasphemous new interpretations by this seemingly random, unwashed hippie.

The narration is sub-par, the acting is all pathos and bathos, and there was much eating of flan.

As a former actor, the Temptation Of The Reviewer is to excoriate the acting in this movie, but he won’t. Because Jesus preached redemption. And forgiveness.