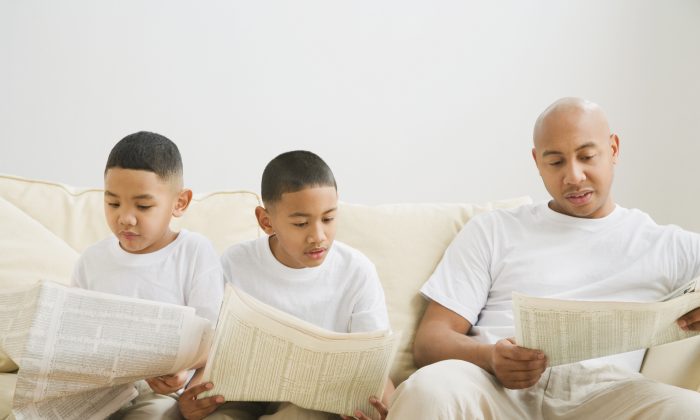 Someone’s Watching: Why Anyone Can Be a Good Role Model

We learn by imitation, and we look to role models for guidance.

Professional athletes, pop stars, and other celebrities are often promoted as role models, but the people we mirror may take many forms. They could be historical (George Washington or Ghandi remain popular exemplars of grace, sacrifice, and leadership), religious (Buddha, Jesus, or another deity of your choice), or just everyday people (parents, teachers, friends, and neighbors).

The role model dynamic is simply about demonstrating characteristics others wish to emulate.

We need to embrace the possibility that we might be the only positive role model some children might ever see.
— Dr. John DeGarmo , director, Foster Care Institute

Advertisers seek celebrity role models due to their success and good looks. But you don’t have to be rich and famous or have less than 10 percent body fat to have an impact on the people around you.

According to Dr. John DeGarmo, director of the Foster Care Institute, we’re all role models whether we like it or not.

“We are all walking, talking role models, 24 hours a day,” DeGarmo said. “Every single one of us is. Somebody is looking up to us in some way. Somebody is watching what we do and listening to what we say.”

DeGarmo has thought a lot about the power of role modeling, especially with kids. During his tenure as a teacher at a rural high school, he noticed several of his students with a pattern of behavioral problems, academic issues, and poor attendance.

“I kept asking, why is this? And then I met a lot of their birth parents and realized it starts in the home,” he said.

Parenting may be the most important and intensive role modeling gig there is. We don’t just pass down our genetic material, but our way of life. Kids try on their parents’ habits and routines, see how they fit, and make them their own.

But what happens to kids without parents? Where do they get their guidance? These questions led DeGarmo and his wife to open up their home to numerous children. In addition to their own six kids (both biological and adopted), the DeGarmos are currently foster parents to three siblings. Over the past decade, more than 50 foster kids have lived at the DeGarmo house, and he tries to give them all the best impression he can.

As long as we realize that our behavior at any moment might manifest in someone else, we become more mindful of our actions.

“When these kids come to my home, some of them have never seen how a husband treats a wife,” he said. “They’ve never seen somebody interact with people at the grocery store or the gas station, in all walks of life or in difficult situations.”

DeGarmo says that if he doesn’t teach his kids how to behave, he knows someone else—or something else—will.

“We’re living in a society where more and more children are being raised by cellphones, computers, and tablets—everything except an actual human being to interact with them,” he said.

“That’s why it’s even more essential that we try to counter that and be a positive role model to everyone that we meet. It’s a big responsibility, but it’s an important one.”

The DeGarmos have taken in so many kids because there are so many that need help. Fueled in part by the opioid crisis, several U.S. states are currently experiencing a corresponding foster care crisis, as a growing number of children lack a home or guardians to care for them.

“Two of the kids I’ve adopted are third-generation foster care, which means that their parents and their grandparents have been in foster care as well. The system failed them. They didn’t get what they needed from their parents or other members of society. They just followed this vicious cycle they were in,” he said. “We broke that with the kids we adopted.”

DeGarmo wants more people to adopt or become foster parents, but he says there are many ways to counter the negative influences that all children pick up. Other positive role models can include teachers, coaches, and tutors.

“For today’s kids, if there is no one there to show them that this is how we act, this is how we talk, this is proper behavior, this is positive role modeling, then we’re going to have a generation that is in rough shape,” he said.

Positive role modeling doesn’t require a formal title. As long as we realize that our behavior at any moment might manifest in someone else, we become more mindful of our actions. This by itself makes the world a better place.

“We need to embrace the possibility that we might be the only positive role model some children might ever see,” DeGarmo said.

Mirroring for the Future

It can be daunting to consider that even the little details of your behavior may be copied and scrutinized by the world around you. In the latest issue of Interview magazine, actress Emma Watson admitted that living under such pressure can be a little paralyzing.

“When people call me a role model, it puts the fear of God into me, because I feel like I’m destined to fail,” she said.

Many young women look up to Watson for her accomplishments, but you don’t have to play strong female roles or be a U.N. Women’s Goodwill Ambassador to promote a positive influence. Just by being a good, kind person you can help guide the way.

10 Ways to Instill Good Manners in Your Children

6 Lessons I Learned From My Children

According to Dr. Shelly Chandler, a licensed mental health counselor and provost of Beacon College in Leesburg, Florida, our words and actions can help endorse the virtues of a healthy lifestyle, the importance of education, or other positive qualities.

“I grew up on a farm where my father valued hard work,” Chandler said in an email. “We were encouraged by receiving his positive attention when working on the farm together. These activities provided us with a shared vision and promoted his values of hard work and integrity within us.”

But this mirroring feature works the other way, too. Chandler says that when children see a negative behavior that is not followed by a consequence, it can lead to something called “negative vicarious learning.”

Some examples can be extreme, like the Dallas boy who killed his younger brother while trying to imitate a wrestling move he saw on television. However, commonplace examples can be more insidious, such as celebrities who appear to enjoy success without hard work.

It’s inevitable that kids will be exposed to bad behavior, and this is why they need regular exposure to positive role models to help balance the scales. But DeGarmo said that many kids are growing up in a culture where they see mostly bad examples, with no one to tell them what is right or wrong.

“A child wants to do the right thing,” he said. “Lots of children just simply don’t know how to do that because they’ve never had somebody spend time with them in a positive fashion.“