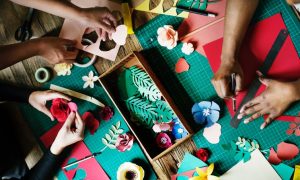 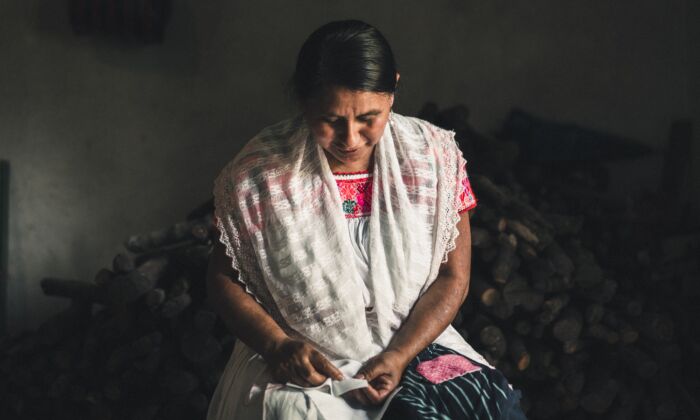 A Mexican artisan in Puebla counts the stitches in her hand embroidery. (Someone Somewhere)
Traditional Culture

Antonio Nuño co-founded the company in Mexico with his best friends, Fátima Álvarez and Enrique Rodriguez, in 2016. The friends, all under 30 years old, launched their company via a Kickstarter campaign selling T-shirts and backpacks. Orders came in from 27 countries across the world. The campaign raised their $50,000 goal in just two days; they had to close the campaign down as they’d reached the maximum orders they could fill.

The Kickstarter campaign enabled the company to launch its online business in Mexico. On Aug. 27, the company launched in the United States.

Someone Somewhere markets its products—mainly bags, backpacks, and T-shirts—to millennials. The founders discovered that millennials were one of the market segments who cared the most about the impact of the products they bought. The founders are millennials, too. “We know that if we don’t do something to solve the world’s problems, we’re going to suffer,” Nuño said on a video call.

Nuño is passionate about making people understand how traditional crafts can help artisans move out of poverty. Previously, he worked for NGOs and corporations such as McKinsey & Co. He sees Someone Somewhere as a bridge between millennials and artisans, and as the company grows and gains more experience, the easier it becomes to connect both worlds.

A Disappearing Way of Life

Nuño and his friends’ interest in artisans piqued during a volunteer trip in high school to Puebla in east-central Mexico. Everywhere the friends went, they were warmly welcomed as treasured guests, as was the local custom. “They gave us the best food they had. They shared so many things without knowing us, without expecting anything back,” Nuño said. But as they became closer acquainted with the families, they realized the level of poverty in the community.

After that first trip, the friends spent months living with different artisans, observing their everyday life, to see firsthand the poverty they faced. “We decided to go and live in these communities to really understand the root of the issue,” Nuño said.

They found two issues. First, there was a lack of job opportunities. The artisans lived in remote villages in the middle of the mountains, cut off from the rest of the world, with the main job opportunities being in agriculture or handicrafts. Secondly, artisans, many of whom are women, were struggling to survive; and their children, seeing their mothers struggle, were not motivated to learn the craft. If the younger generation was not learning the craft, this presented a real risk that the handicraft techniques, which for years had been passed from generation to generation, would disappear, Nuño explained.

These communities faced other risks to their way of life. Most of the women wore traditional dresses, but the teenagers dressed like people in the movies or the novellas (soap operas), believing it was cool to do so.

“That was very sad,” Nuño said, because the handicrafts convey the heritage of these communities. “Every single color, every single shape has a meaning,” he said. A lot of the patterns tell the history of the community: the first arrivals, the first animals they saw, or the type of flowers they harvested. “A lot of things are tied to the craft, and if the younger generations aren’t interested in learning it, that history will be lost,” he said.

Nuño believes that artisan communities would be the happiest places on earth if they could survive on earnings from their crafts. He believes their way of life is better than in the city, but the only issue is that they’re losing it.

“All the media makes them aspire to live the way [people in] the big cities live. But when you are there [in these artisan communities], it’s the best quality of life: They’re connected to nature. They care a lot about each other. They worry about big things like what they are going to eat tomorrow or what happens if somebody gets sick. But they don’t aspire to have a lot of material things,” Nuño said.

Such communities embrace the philosophy of “buen vivir,” an ethos that Someone Somewhere has adopted. Nuño says that the indigenous philosophy can be found in Peru, Colombia, and Bolivia, as well as Mexico, although the name differs from community to community and country to country.

“The best phrase, I think, that describes it is that they want to live well and not live better. …The ‘better world’ they see as craving and always needing more.” The essence of this way of life is to enjoy living in their environment without wanting more, which is not sustainable, he added.

Once Nuño and his friends returned to their lives in the city, they thought: How can we live like this, knowing that there are so many people struggling? “But, even worse, now that we know, how we can solve this,” Nuño said. That was the turning point for them. “We knew a solution that we could develop that could help a lot of people.”

Nuño explained that in most countries, artisans usually sell their handicrafts in tourist cities via two channels. Either the artisan sells directly to tourists in the street by laying a carpet on the ground to display products, or the artisan sends consignments to souvenir shops where products are piled sky-high. Both sales methods neglect to tell the buyer the story of the handicraft. “It feels almost like a commodity instead of something that has a lot of meaning and [that] each artisan spent hours creating,” Nuño said.

Once an artisan has woven the fabric or hand-stitched some embroidery, they sign the label with their name under “Someone” and their village under  “Somewhere.” The component is sent for assembly in a number of workshops in Mexico City, depending on the product. Many of these workshops are in poor areas, and the company helps educate the businesses to ensure they thrive, too.

The artisans themselves take pride in knowing that someone from the United States, France, or Spain is wearing their creation, Nuño said.

The Key to Community Success

Listening to and working together with the community has been the key to building a business that works in these communities, Nuño said. It doesn’t work to impose the city’s pace and processes on the artisans. The pace has to come from them.

Someone Somewhere artisans decide how much work they want. There are older ladies who are content with producing one product a day. And younger ladies, saving for their dreams, may make five products a day. Nuño says that for single mothers, the only way to make money before was by working 10 to 12 hours in the fields under the scorching sun, which wasn’t practical for those with three or four children. Now these mothers can work from home, making it more convenient for them and their families.

Many of the women artisans now earn more than their husbands. The artisan’s income has increased by 300 percent to a fair, living wage. “In the first community, we actually had workshops to teach the men why this was actually good for them and not bad because it was threatening their pride,” Nuño said. The extra income means that, for many, their children no longer have to work in the fields and can go to school instead. Now Someone Somewhere gets a lot of requests from men to work at the logistics, and a few are also artisans.

The company is making a difference for millennial artisans too. Nuño recalls his high school volunteer trip, and the very first house he arrived at in Puebla. He got chatting with a girl the same age as he was. Jokingly, he asked her if she had achieved straight A’s in school. To his surprise, she said, “Yes.” The girl shared her report cards with him. She’d been an A+ student throughout her schooling. Taken aback, Nuño asked her, “What’s next?” She had wanted to study industrial engineering, which was what he was about to start studying. However, her parents needed her to look after the farm and didn’t have the money to send her to the city. Nuño was shocked: They were the same age, yet the only difference between them was that she was born in a place where she didn’t have the opportunity to study.

The girl, Rosa Secundino, became one of the first five artisans to work for Someone Somewhere. She was able to save all the money she earned, and within a year she had enough to study industrial engineering at the university.

Now, back in her village, she hopes to continue to practice her craft and use her industrial engineering skills, such as dealing with logistics, to help organize and improve her community. “It was her way of using her talents to help keep those traditions alive,” Nuño explained.

Someone Somewhere is changing the lives of those living in poverty. It started with five artisans and now works with 180, and it continues to grow. Soon, the company will launch its first product from Peru. And about the future, Nuño says: “There are millions of artisans in the world who could work with us, so we have a lot of work ahead.”

To find out more about Someone Somewhere, visit SomeoneSomewhere.com