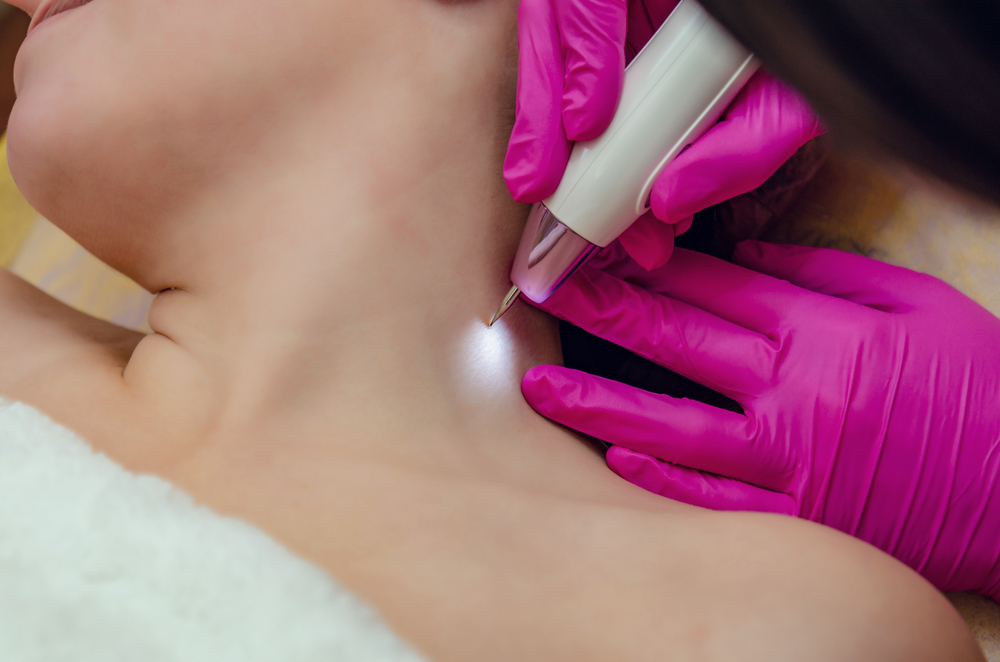 Skin tags are mostly skin and collagen, but they’re also connected to us through a few blood vessels. (ShutterStock)
Hair, Skin, Nails

Some skin abnormalities can be a cause for alarm, while others are more of a curiosity. Skin tags are found in the “curio” category. They may not look pretty, but they are harmless, and fairly easy to remove.

Unlike other growths, like moles or warts, acrochordons have a rather flimsy hold on us. The smaller ones may simply rub off with normal wear and tear, but skin tags with a stronger grip can also be set free.

The same over-the-counter products that are used to remove warts are also promoted for skin tags. After several applications of the chemical compound, the tag eventually falls off.

But there are much more direct and reliable ways to rid yourself of these things.

Cutting is the fastest way. It’s just a quick snip of the stalk. This is the smallest part of the skin tag and also where the thing attaches to the body.

Skin tags are mostly skin and collagen, but they’re also connected to us through a few blood vessels. Small tags rarely bleed when cut (and may not even hurt) but there may be some bleeding with larger tags. Anesthetic cream can numb the pain, and bleeding is typically minimal and short-lived.

Bleeding can be further minimized with the use of radiocautery. This skin tag removal method gives the doctor more precision than scissors, and also cauterizes the wound as it cuts through the stalk. Heat can also come in the form of a CO2 laser, a treatment that gets its heat from 10,600 nanometer wavelength. Dermatologists use CO2 lasers in skin resurfacing treatments because they effectively burn off the superficial layer of skin, but they can also be used to slice through a stalk without damaging the surrounding tissue.

The final option is freezing. Liquid nitrogen is sprayed on tags, and chills them to death. The dead tag simply flakes off a few days after the procedure.

Imagine if your skin got colored outside the lines, with scribbled bits of excess hanging beyond the borders of your body. These are skin tags. Also known as acrochordons, these small nubs are strange, but at the same time, very common. By some estimates, as much as 60 percent of adults will develop acrochordons somewhere on their body. Some may only have one, while others may sprout dozens.

Skin tags can vary in size from a mere speck to a grain of rice, to a floppy garbanzo bean. They’re often irregularly shaped, and the larger they get the more wrinkled and baglike they appear. They dangle from the body on a small stalk, but it’s not entirely clear how they form.

Skin tags are an excess of cells which tend to emerge wherever one part of the skin rubs against another, so friction is blamed as the primary culprit. Common skin tag hangouts include armpits, neck creases, under breasts, between belly rolls, and the inner upper thigh area. But these tiny appendages can also be found in areas of minimal friction, notably around the eyes.

Skin tags are found on all races and ages, but some demographics see a lot more. These rubbery nubs can be found on teens, but they exceedingly favor people over 40.

Since skin friction fosters skin tags, obese individuals are likely to see more. Necklace wearers may generate skin tags as well, as the chain constantly rubs the neck. But friction only tells part of the skin tag story. Those suffering from diabetes, or metabolic syndrome are also more likely to find acrochordons, as well as women who are pregnant or have polycystic ovary syndrome (PCOS).

You’ll also find a lot of tags on people with a genetic disorder called Birt-Hogg-Dubé syndrome. The syndrome is primarily characterized by a multitude of skin tags, but more serious cases can result in pulmonary cysts and kidney tumors.

While skin tags don’t endanger our health, these rubbery protuberances can be an unsightly and sometimes a painful nuisance. Thankfully these soft growths can be removed with relative ease and little risk.