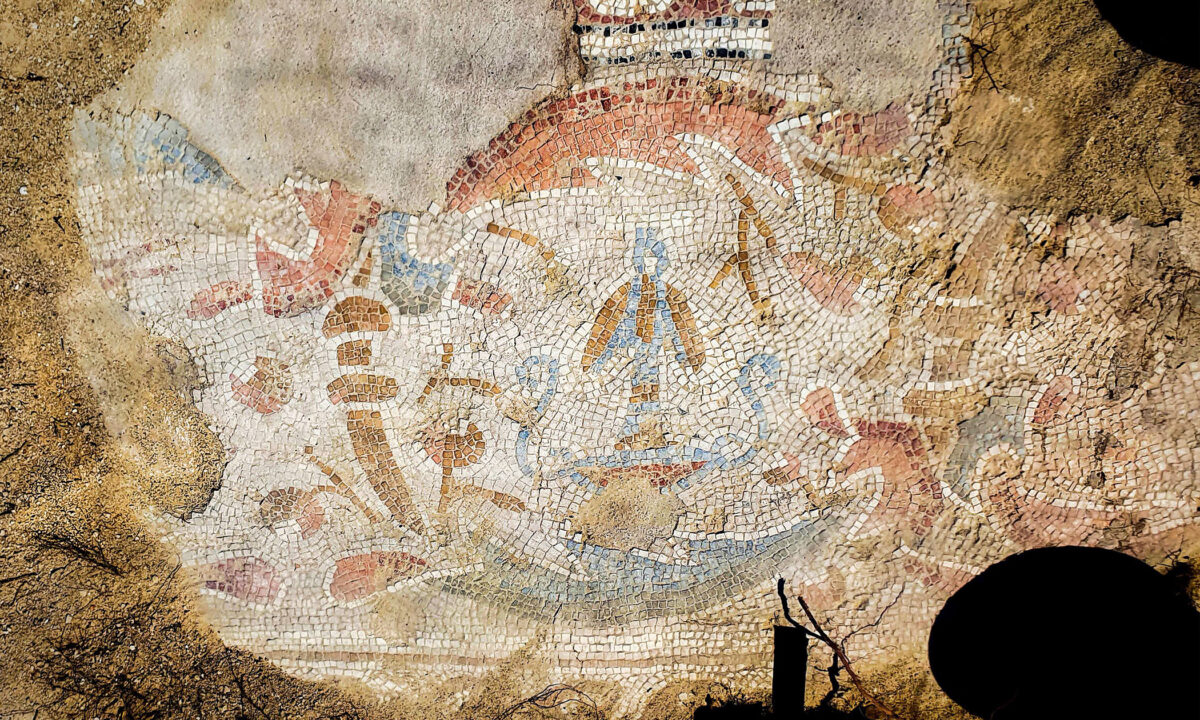 A decades-old discovery of ruins bearing biblical significance was re-excavated this past summer. After being reburied once previously, a number of antiquated structures, including a church and extravagant mosaic, were exhumed in a joint Israeli military-antiquities conservation undertaking.

Twenty years ago, a pair of Israeli researchers unearthed an ancient ecclesiastical site at Horbat Hani, in the foothills east of the upscale, then fledgling settlement of Soham.

Located here were the remains of a Byzantine covenant complex, once a nuns’ quarters, it’s believed, encompassing a colorful mosaic depicting plant and animal scenes along with inscriptions. Several other structures were also found. All were dated to be some 1,500 years old.

Dr. Uzi Dahari and Dr. Yehiel Zelinger of the Israel Antiquities Authority (IAA) were responsible for the initial discovery, which was subsequently covered up to protect it. And it remained protected there—safe and undisturbed—for two decades.

Until recently when the site was damaged during military activities in the area, conducted by the Israeli Defense Force (IDF), which prompted a re-excavation initiative that was dubbed the Nature Defense Forces Project.

This past summer, IDF personnel worked hand in hand with archeologists to exhume the impressive ruins once again. The area was reopened, and dozens of soldiers started digging under the guidance of antiquities experts, according to Issy Kornfeld, director of the project with the IAA.

“In the original excavation, two buildings were uncovered, one of which was a church paved with a colorful mosaic depicting faunal and vegetal scenes, an entrance hall, the nuns’ dormitories, hermit cells, a tower with rooms, and a crypt, an underground burial complex,” Kornfeld stated in an IAA press release. “The other building included a kitchen, a refectory (dining hall) and an inn for pilgrims.”

There is evidence the covenant once carried forward an ancient women’s tradition—one of biblical significance—according to IAA archaeologist Dr. Eitan Klein. The church may have commemorated the burial place of Hannah, wife of Elkanah and mother of the prophet Samuel.

“As often in the ancient world, the convent was erected here, commemorating an ancient tradition,” Kornfeld stated. A few female skeletons were uncovered here, believed to possibly be women who wanted to be laid to rest in proximity to that sanctified prophet’s mother.

The collaborative operation was lauded as an example shown by the military of taking responsibility for the environs where it operates, while helping to conserve part of their heritage.

“The soldiers and the offices enjoyed the hands-on archaeological work, and we hope that the joint activities protecting the archaeological sites will continue in the future,” said Guy Saly, director of the IDF project.

The project afforded the opportunity for both organizations to team up and work together in joint cooperation, said IAA Director Eli Eskosido. “The adoption of archaeological sites in army bases and military zones, and the creation of archaeological exhibitions in army bases, further consolidate the strong connection between the defense of the state of Israel, and the protection of the ancient sites and our cultural inheritance,” Eskosido stated.

The Byzantine church mosaic is now partially visible for public viewing and can be seen by visitors with advanced permission from IDF Central Command.