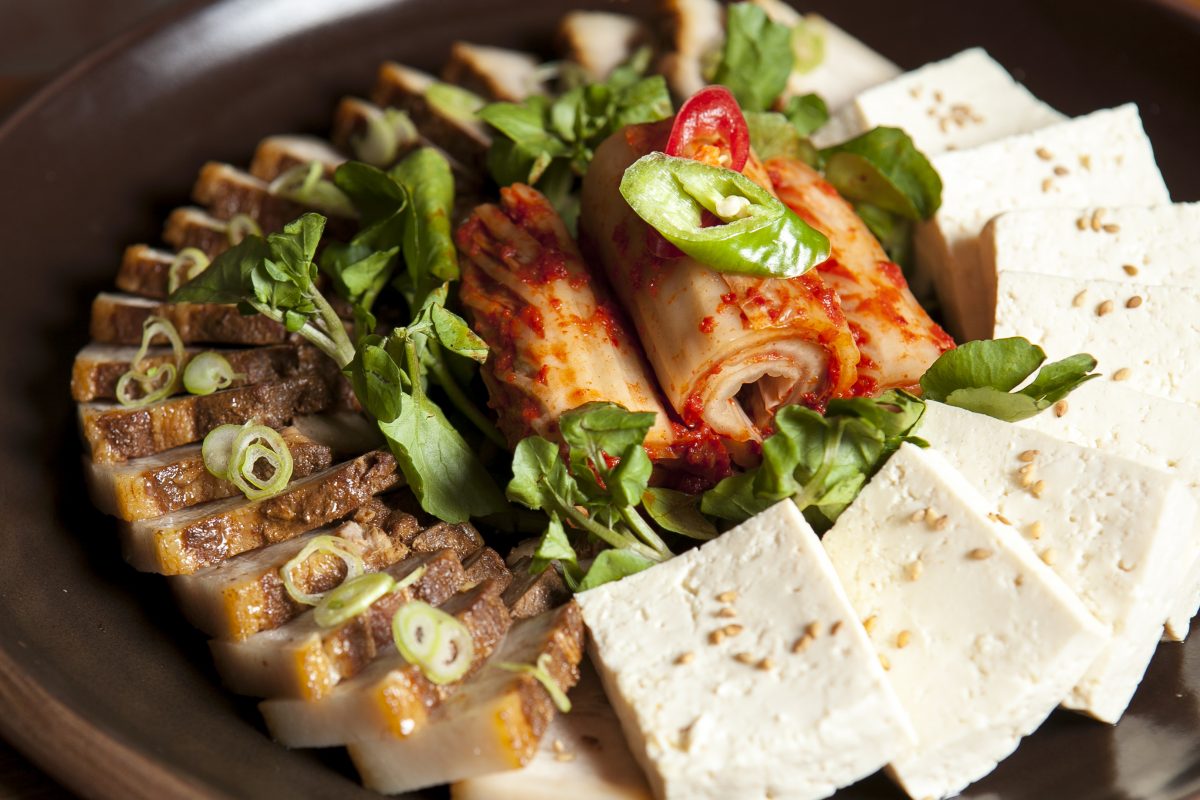 Soju Haus, Experience the Food and Drink That Binds a Nation

If you want to get a grip on Korean culture, you have to try soju. On the surface, it’s South Korea’s most consumed national drink, but fundamentally it is the spirit that binds a nation and greases the wheels of social harmony.

There’s a Korean expression, “To look at appearance, use a mirror; to look at the heart, use liquor.”

At company orientations, newbies are taken out for soju rounds to bond with their colleagues. And at Korea’s drinking tents, or pojangmacha—essentially street bars with orange tarp walls—the human drama and comedy unfolds over glasses of soju. A Korean friend told me that soju is the indispensable ingredient that helps a nation of introverts to open up.

Originally made with rice, modern soju nowadays is distilled from sweet potato or grains.

In 2012, it was a soju brand, Jinro, that was the world’s best-selling liquor brand, according to industry magazine Drinks International, selling 65.3 million 9-liter cases. For perspective, Smirnoff was No. 3, selling less than half that, 25.8 million cases.

Soju’s astounding popularity is due to inexpensive prices (a couple of dollars for a 10-ounce bottle), wide availability, moderate alcohol levels (about 19 percent in most cases), and of course the fact that Koreans drink a lot, with a per capita alcohol consumption of 8.9 liters a year per capita (about 9 quarts), according to a 2013 OECD report. It’s equivalent to about 2.4 bottles of soju a week.

At Koreatown’s Soju Haus, which takes its name from the German beer gardens, the menu is not large, but it is carefully conceived to match soju.

Koreans and Korean-Americans make up about 80 percent of the clientele. There’s no question they are introducing it to their non-Korean friends, but adventurous foodies have also started to discover it on their own.

Executive chef JK Kim said, “To be honest with you, as a cook, I get a strange feeling because I see customers here who are non-Korean. Most likely someone Korean or Asian brings non-Korean friends but these days, just non-Koreans come, maybe three or four people, sitting over there, and they know everything. They’re not afraid of trying chicken gizzards. We ask them, ‘Is it too spicy?’ and they say, ‘What are you talking about?’ They love spicy food, they love even pork feet.”

Last fall, he brought pork feet to the New York City Wine & Food Festival and the attendees cleaned out 3,000 portions in six hours. “In the end people yelled at us, that there’s no food. … There’s no boundary. It’s a lovely thing, in my opinion.”

Drinking soju is a highly social activity, and the space configuration at Soju Haus is thoughtfully oriented toward that.

The variety of seating spaces is meant for the coziest configuration possible: intimate banquettes or small tables for groups of four, round tables for groups of five or six (anyone who’s ever been out with five people knows there’s always the awkward choice of who will end up sitting a little further from everyone else. A little round table eliminates all that.) Finally there are also a few communal high tables with eight seats.

It’s spacious, with high ceilings, exposed brick walls, hardwood floors, and has that post-industrial chic, complete with chalk drawings, upturned metal buckets lining up one section of the ceiling, with naked light bulbs of different colors hanging down. Located on the second floor, its almost floor-to-window glass windows give a view of the Empire State Building.

There’s an intricate etiquette that guides the drinking of soju. At the most basic are these: drink the first glass in one shot; don’t ever refill your own glass; and don’t let others’ glasses sit empty.

Then also, due respect must be shown to elders (and what this really means is whether it’s someone twice your age, or two years older than you) and people with more authority (bosses, for example). When being served, use both hands to hold your glass. And when you are served by someone older, turn away to the side and cover your mouth and glass while drinking. When you are serving someone older or more important, use both hands to pour the bottle.

It’s in these acts of reciprocal serving and toasting that bonding and respect are manifested. It all goes on until no one can take it anymore, but just as likely, no one remembers how it all ends. “Until we die,” said JK Kim with a laugh. “Pouring, respecting each other.”

In Korea the choices to go with soju are pretty clear: beef intestines, to whose single perfection franchises and stores are devoted; chicken gizzards; or marinated pork feet.

I tried the grilled chicken gizzards ($9.95) and wasn’t enamored with the prized chewy texture, but I loved other dishes I tried.

The seafood pancake ($15.95) is different than the other places I’ve tried: first there’s more seafood than batter, an abundance of shrimp, calamari, and octopus. Second, the pancake is unusually and delightfully crispy, with the addition of sweet rice flour and tempura powder to the batter. The portions are downright huge.

The soups and stews are delicious and soul-satisfying, whether you go with a mild soup or a spicy one.

I loved the inventiveness of the Army stew, budae jiggae (called spicy sausage casserole on the menu, $22.95). After the Korean War, when food was scarce, South Koreans used the surplus food from American bases. That meant hot dogs and Spam went into the stew pot, along with red chili paste, and kimchi. The version at Soju Haus also has slices of pepperoni, tofu, greens, and ramen noodles. Necessity made for a surprisingly good dish that remains popular to this day.

The mild seafood stew ($25.95) has plump, juicy mussels and clams, with a flavorful, pleasing light-colored seafood broth that I’m told has “only” been boiled for eight hours.

That’s in contrast to the regular beef bone broth, which is boiled over three days, and like the seafood broth, is used in a variety of soups and stews. For 15 hours a day, for three days, the broth is simmered and filtered. It goes back to the long-standing Korean concern for health, and the soups are meant to replenish you with the minerals you lose drinking soju.

Bossam, or braised pork belly, is another specialty, to which there’s a huge devoted following in Korea. One franchise has about 800 stores that serve only two things: bossam and pork feet. At Soju Haus it’s braised with a veritable pharmacopoeia of herbs that are meant to be good for you: milk vetch, Korean angelica, oriental raison tree, and fresh ginseng. You can have it here in the tofu bossam with kimchi ($24.95). Use a piece of tofu as the base, and layered with kimchi and bossam. Or if it’s all too big, go for a combination of tofu and kimchi, or bossam and kimchi.

The bulgogi ($18.95), which comes sizzling, is melt-in-your-mouth good, sweet, and addictive.

A bowl of rice (free before 8 p.m.) comes covered with a fried egg and underneath are some salty-sweet little anchovies.

Note spicy food is excellent with soju; any fiery heat is instantly wiped away with a drink.

There a variety of drinks, from beers to rice or fruit wines, as well as soju-based cocktails, in pomegranate, ginger, lemon, and cucumber versions. But when it comes to soju bottles, there are two main choices: the drier Chamisul Fresh (made by Jinro) and the smoother Chum Churum Cool (either bottle, $15.95).

It’s been a constant companion, from days of scarcity and hardship, when it helped people cope, to days of plenty, where it’s become an integral part of good times. Throughout, it has brought people together.