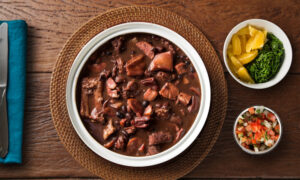 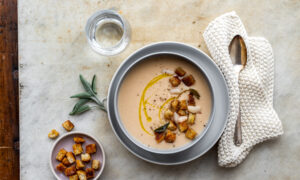 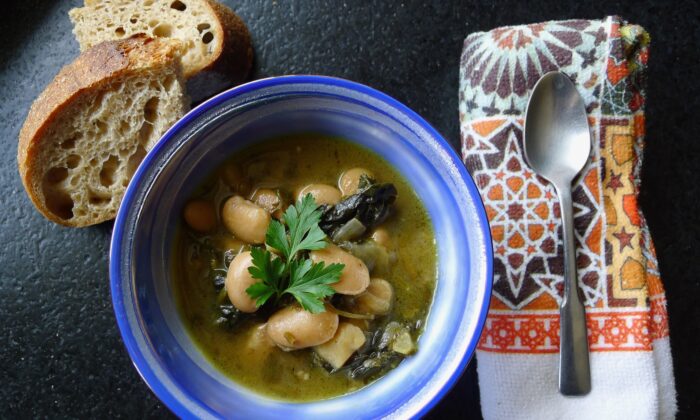 Cocido de hinojos is traditionally made with fennel, but this recipe uses parsley and kale; any greens will work. (Ari LeVaux)
Recipes

Cocido de hinojos, a Spanish bean soup, uses dried beans from the pantry and wild fennel from the Andalusian hills—or whatever greens you have on hand
By Ari LeVaux
Print

Like most of you, I have been sheltering in place for what feels like ever. My house arrest began in mid-March, in Spain, when the prime minister declared a state of emergency. A week later I was home, and began a 14-day self-quarantine, from which I recently emerged into a state on orders to stay home as much as possible.

It feels oddly familiar, because in some ways I have been preparing to shelter in place for a lot longer. Since about Y2K, when it seemed totally reasonable to expect that computers would lose track of which millennium we were in, and trigger societal collapse. Activities like gardening, canning, and raising chickens felt like a reasonable response to the coming chaos.

Some of us also noticed the sweet and savory rewards available to those who prepared to be self-sufficient, just in case, whether for disaster or just winter. Crisis or not, you still eat the canned peaches. As the years went by I became so distracted by the pleasures of food storage that I forgot I was also preparing for the big one.

There’s no food shortage, yet, but many people are stockpiling. Canned food is the most popular, especially beans but also vegetables. You don’t hear stories about people hoarding fresh produce, even though we all should be eating more of that, if we are trying to stay healthy.

I did most of my stockpiling last fall. This is the time of year when I normally focus on eating from my stash. I have frozen bags of tomato sauce and pesto to make noodle time extra special, as well as frozen steak, burger, and sausage; breaded cutlets of eggplant and zucchini; jars of salsa, pickled peppers, and chutney; sacks of dried fruit; and many more ingredients, packaged when it was fresh for rainy days like today.

You don’t have to aim big if you are just starting out stocking a pantry. Stick to an amount that’s doable, and fun. Experiment. Most importantly, find some good fresh produce, and start cutting it up. Figure out how to cook it, maybe preserve it. At the very least cook a big batch of something and freeze the leftovers.

My local store is cleaned out of canned beans, and yours probably is too, but the dry beans are fully available, right where they always are, languishing in sacks and in bulk bins. No worries, as dried beans are preferable. The only advantage of canned beans is that they are already soft, and ready to go immediately. But dried beans are cheaper, per bean, than canned beans, and occupy less space in the bunker. And when you are truly sheltering in place, as we all know by now, time is no longer in as short supply.

At this point in a normal spring, I would be loading up on storage crops like potatoes and also young greenhouse greens at my local farmers market. Since the market is closed, I have been reaching out to farmer friends to schedule some socially distant parking lot deals for carrots, onions, potatoes, cabbage, and other winter staples. And fresh greens like baby bok choy and spinach for my Nongshim ramen noodles, and sweet radish and pea shoots and whatever random stuff they might have.

Here is a bean soup recipe from the south of Spain, where my own personal quarantine began. Cocido de hinojos is traditionally made with fennel, which grows wild in the Andalusian hills, but any kind of greens will work. This recipe uses parsley and kale, as fennel can be scarce these days. In this soup, as in life, the more greens and veggies you can cook in those beans, the better.

This recipe is written for dried beans. If using an Instant Pot, slow cooker, or canned beans, adjust the recipe accordingly. Whatever you do, don’t throw out the bean water, including the bean water from a can—add that broth to the pot.

Serves 4, with another four extra servings for the freezer

Rinse the beans and soak them overnight in 4 quarts of water in a large pot. The next day, cook the beans for an hour or so, until soft. Add the stock, thyme, celery, carrot, potato, and (un-minced) half of the onion, peel and all. Cook for another hour.

Hold the parsley bunch by the leaf end and slice the stems as thinly as possible. Chop the leaves and set aside for later.

Heat the olive oil in a heavy-bottomed pot on medium-high, with bacon if using, and add the minced parsley stems. Fry for about 5 minutes, add the minced onions, and cook for another 5 or so minutes, until the onions are nearly caramelized. Stir in the garlic. When the delicious garlic aroma is almost developing a burnt edge, about 2 minutes, deglaze with the wine.

Remove the large pieces of celery, carrots, and onion from the bean pot and use a slotted spoon to scoop the beany remains into the fried onion, parsley, and garlic. Add the lemon juice and zest, kale, and salt, and enough bean broth to cover everything by an inch. Turn the heat to medium, cover with a tight-fitting lid, and cook for another 30 minutes, adjusting the broth level to your liking with stock from the bean pot.

About ten minutes before turning off the heat, add the chopped parsley leaves. Serve with a drizzle of your finest olive oil, or a splash of hot sauce.