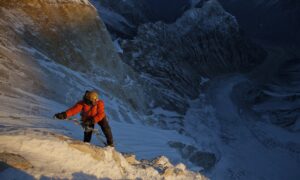 It’s been said that humanity’s current slide towards moral and environmental destruction will soon cause, among other things, the disappearance of potable water. Inventor extraordinaire Dean Kamen (he invented the miracle-of-balance, two-wheeled Segway) also thinks so: “In your lifetime, my lifetime, we will see water be a really scarce, valuable commodity,” he says.

Kamen is obsessed with time. But as brilliant as his mind is, he knows he can’t invent a time machine like the one H.G. Wells and “Back to the Future” imagined—punch in a date, go there, come back.

Therefore, because he can’t extend time, he’s in a race against it, to invent something that saves people and the planet. Is that perhaps grandiose? Not in the least.

2015’s “SlingShot” is a highly inspiring documentary about Kamen’s latest, most important contraption. It’s a tale of one man’s total dedication to his God-given talent, and his quest to put that talent to compassionate use.

Getting to Know Dean

It gives one pause to see the work-output of someone obsessively aware that time is slipping away. Kamen’s house alone—a New Hampshire-based wooden wonder—is festooned with handmade, highly complex clocks, secret passageways, and a gigantic cast-iron steamboat engine in his living room. It’s a kid’s dream-house come to life.

He admits that when he was little, he’d imagined someday owning something as outrageous as a glass wall that he could he’d flip up in order to jump into his own helicopter and fly away. Now, he’s got that actual glass wall installed in his dream house, and pilots his own chopper to his own inventing company. That would be DEKA Research and Development, in Manchester, New Hampshire.

Dean’s parents say he got his outrageous work ethic from his artist father. When young Dean told his dad he felt sorry for him, having to work all the time, his father replied that it wasn’t work at all because he was having way too much fun. He told Dean he shouldn’t rest until he also found his joy, where work is really play.

Dean was not a popular child; no kids liked him at camp. He once wrote his parents that he’d like to come home now and queried as to whether they could also provide him with three secretaries (three) to help him handle all the work he was going to do. He signed off as “Your woeful and outcast son, me. Have to go to volleyball now.”

He was a slow learner. Or as he himself puts it, “A sloooooooow learner. I’m the slowest, dumbest genius you’ll ever meet.” He had dyslexia and was interminably slow compared to his brother Bart, the medical doctor. He understands the dyslexia as the flip side of his prodigious talent—part and parcel of it.

Dean started making home-dialysis machines and realized he also needed to manufacture his own medical-grade water. Whereupon he invented a contraption where you pour any polluted liquid, anything at all, like heavy metal-containing greasy water from an urban pothole, cow-barn drainage, port-a-potty effluent, ocean water—in one side of the black box he’s christened the Slingshot … and super-purified, perfect, medical-grade water—comes out the other. Immediately potable.

As Kamen says, “Once we did that, we realized, if we can take everything out of water, why are we only doing it for the small subset of the human race that has kidney failure? Why aren’t we doing it for everybody?” And furthermore, “We could empty half of all the beds in all the hospitals in the world just by giving people clean water.”

The Slingshot is a “vapor compression distiller” situated between two tanks, connected by hoses. One tank contains bad water, the other good water. Using solar energy, it boils, distills, and vaporizes the bad gunk, turns it into perfect, clear water, and only uses a tiny amount of electricity. It took him 10 years to build it; now it’s ready for Ghana and other developing countries.

One Slingshot purifies 1,000 liters of water a day, which supports, for the same amount of time, the comprehensive hydration, cooking, and hygienic needs of around 100 people. It purifies a million liters in three years.

The world’s population is quickly approaching 8 billion. According to the World Health Organization and UNICEF, close to a billion people lack safe drinking water. With water the most abundant resource on the planet, it’s beyond ironic that less than 1 percent of Earth’s freshwater supply is potable.

More than 3.5 million people die every year from water-related diseases, and almost 900 million lack access to a safe water supply.

This is brought home powerfully, early in the film. One million people die in Bangladesh per year because of bad water. We see women looking for water all day, in mud puddles and drainage ditches. It’s mentioned that if they find the wrong water, the next day is spent burying babies.

Clean Water for Everyone

As Kamen says, “I only start on projects typically when enough people tell me, ‘you’re nuts.’ Because then you know there must be a problem.”

Water in the past has been regulated by big, top-down government municipal plants, where huge amounts of water get filtered and then sent out through old pipelines with eroding infrastructure, to rural areas.

Kamen says that in the future, everybody will clean their own water. It’ll be a point-of-use situation. That’s where Slingshot comes in—hence its name. The little guy, David, took on Goliath with a slingshot. Kamen believes that you’ve got to start somewhere—ground up. “It is literally like turning lead into gold,” he says. “But I believe it’s more important, because you can’t drink lead or gold.”

But there’s a problem. Each Slingshot costs a few hundred thousand dollars to build. He’s jokingly labeled metallic components with names like “Expensium,” “Unobtainium,” and “Unreliabilium.”

Kamen realized he needed marketing and distribution, and so he decided to partner with companies that could distribute Slingshots globally. But first, some more engineering work was needed to lower production costs—$2,000 per machine would be nice.

The Coca-Cola Company decided to help Kamen spread Slingshot technology with its so-called Ekocenters, which are sort of little 7-Elevens that sell beverages (like … Coke) and snacks but also feature free, clean water.

They tested 15 units in Ghana, whereupon Coke and Kamen’s company pledged to deploy 2,000 Slingshot units in Africa, Asia, and Latin America by the end of 2015.

What millions of African children are used to is their mothers’ arduous marches to rivers and boreholes, and classic, long African treks home, balancing gigantic water containers on top of their heads. Not to mention the boiling, the waiting overnight for the biomass to settle, and the abundant use of chlorine tablets.

In “Slingshot,” we get to see some of the initial testing of Kamen’s masterpiece in rural parts of Ghana. Seeing young children turn on a tap for the first time in their lives, and get clean, running water does the heart good; it’s miraculous to them. Much of the rest of the world has been fortunate enough to take everything having to do with water for granted.

Kamen says people in developing regions of the world need the Slingshot as soon as possible. He’s also pretty sure the world’s water pollution problem will quickly spread beyond small villages in developing countries.

California’s droughts are no joke. The crisis isn’t just “over there” anymore. It’s in our backyard, and if we don’t pay attention to this, we’ll soon be in a fairly desperate situation regarding water. “SlingShot,” the documentary, should have had as wide a distribution as possible in 2015, but it opened at exactly one New York venue.