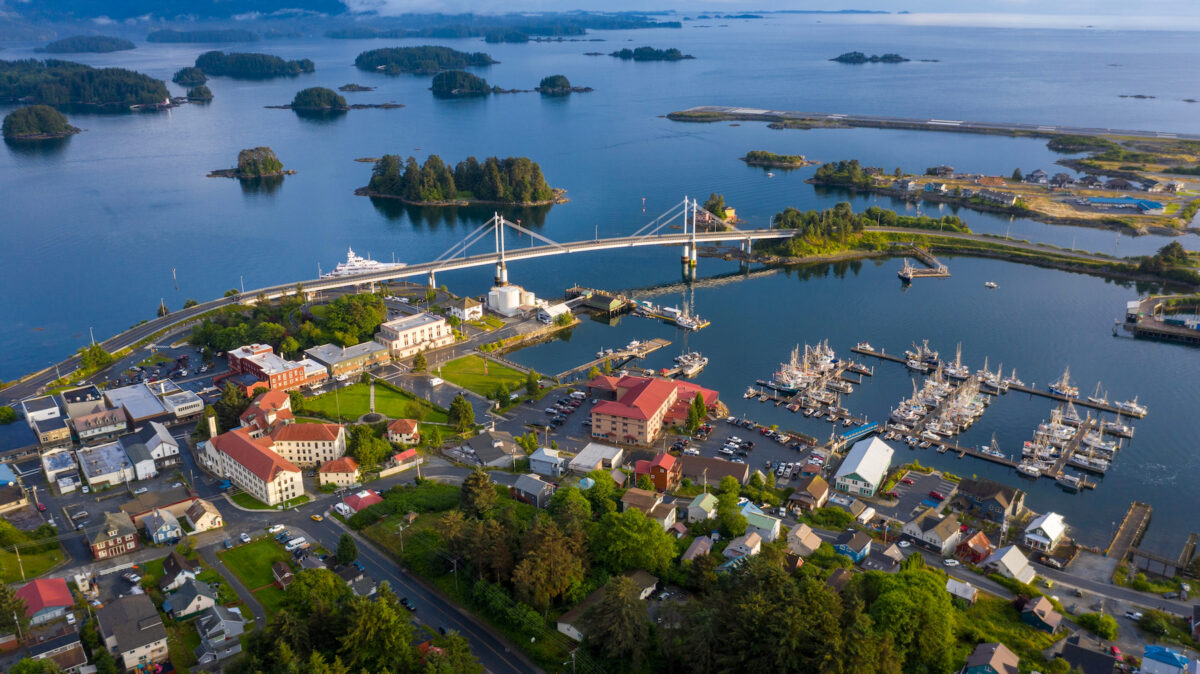 Sitka, Alaska: A City on the Edge of North America

Whale watching could not be better.

Spurred by a yen to get outside one morning in Sitka, Alaska, I’ve taken an easy 20-minute jaunt on a sun-strewn bike path and quiet back roads to a shoreline promontory at the southeast edge of town. A half-dozen humpbacks are working the herring-rich waters of Silver Bay at Entry Point, their spumes caught in the morning light and turning the air as silver as the shimmering Pacific.

Bald eagles soar from their perches in old-growth trees—Sitka spruce, a West Coast monarch known for its saltwater affinity. Flocks of gulls cluster on the sea surface, marking Sitka Sound’s famous abundance of herring—the same breakfast buffet the humpbacks are feasting on. Steller sea lions thrash the water playing and barking. No urban sounds intrude at all.

I’m at a tidy observation platform kindly set in Whale Park by the city—here for both visitors and residents, a couple of whom ride up while I’m savoring the scene.

“Too bad we live here,” his companion adds.

The proudly ironic tone of the second remark hints at the idea this is no ordinary small city with mountains at its back and sea beside. Watching whales, I’m inside the city limits of Sitka, a fact that perfectly illustrates its character. As resplendent as its environment may be, Alaska’s first capital is deeply dedicated to human quality of life. Sitka residents enjoy unparalleled outdoor virtues, and they pay their dues—dues that yield a uniquely dynamic community character.

Poised at the very edge of North America—head straight west out of the harbor and your next stop is Kodiak Island 900 miles away; beyond that, Siberia—Sitka is reached by no road, like many Alaska cities and towns. Its airfield is thus the bridge to the outside world, and is far more accessible than almost any other busy airport you can imagine. Several times I’ve walked from the terminal to the best hotel in town (the Westmark), a 25-minute stroll that provides sensational views of Sitka Harbor, the snowclad mountains east of town, and the almost geometrically perfect cone of the Mount Edgecumbe volcano northward.

Where else in the whole world would you find a first-class Russian dance troupe composed entirely of women? (When it formed in 1969 the town’s men were uninterested in joining a dance troupe) Sure, Sitka had been the capital of Russian America until William Seward bought Alaska in 1867, but, well, American men don’t dance, Russian heritage or no. After more than a half-century, the all-female group performs the complex, fiercely athletic Cossack and Russian parts as ably as Baryshnikov might. “Actually, better,” one tells me. “We’re more flexible, aren’t we?”

In Sitka, you can also:

• Tour a 179-year-old Russian territorial bishop’s house whose massive timbers are as rugged today as ever. Part of Sitka National Historical Park, it beautifully represents a little-known Alaska history that lives today.

• Walk a forest path that holds America’s finest collection of Northwest Coast totems old and new, reflecting the Tlingit and Haida cultures that have thrived in Southeast Alaska for thousands of years.

• Come face-to-face with eagles both outdoors and in, the latter at Alaska Raptor Center on the east edge of town. This is one of the premier wildlife rehab facilities in North America, and its resident eagles, hawks, owls, and more provide visitors a chance to experience the steely gaze of these implacable predators.

• Gawk at one of North America’s greatest collections of religious art, the three dozen gold and silver icons at St Michael Cathedral. Not only are these priceless and deeply affecting works of art—a truly world-class heritage display—the backstory is compelling. The original 1848 church caught fire in 1966, and as the alarm spread across town, a hundred or so residents formed a human chain and ferried the icons to safety while the building went up in flames. Every piece was saved, including a 300-pound chandelier.

The story reflects Sitka’s dedication not only to priceless art, but to its Russian heritage.

Today’s St Michael’s is an exact replica of the original, but built of concrete and steel rather than spruce and sailcloth.

Visitors can walk to all these attractions, even though the daily forecast in Sitka is partly sunny, chance of showers … the showers are usually light, and the rain-washed Pacific air is a gem-clear 64 degrees. So it’s on a stroll one day downtown that I have a quintessential Sitka experience.

“Your sandwiches look great,” I observe at a small tavern near St. Michael’s. “Do you have gluten-free bread?”

The server considers this for a few seconds. “No, but they do at the café across the street. Really good sandwiches there, too.”

Yes, she had just referred me to what, in other cities, would constitute a not-to-be-mentioned competitor. But in Sitka everyone is everyone’s neighbor, visitor and resident alike.