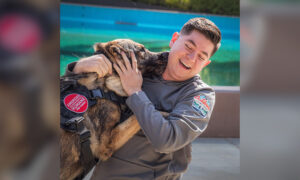 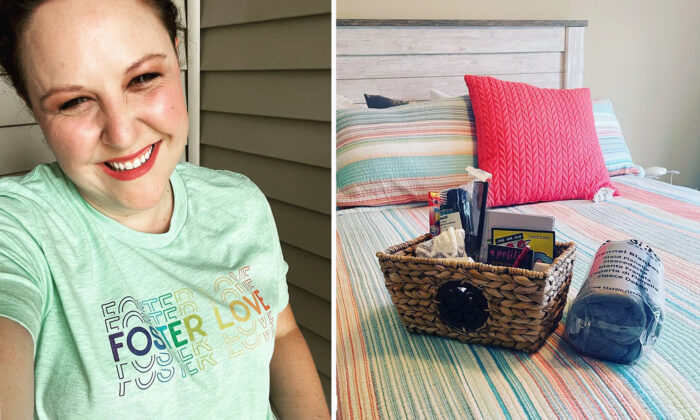 A single foster mom’s winning routine for emergency placements, to put nervous kids at ease and sidestep the first-night awkwardness, has gone viral.

Brittany Burcham of Birmingham, Alabama, started fostering teens in 2019. She shared her routine on TikTok, and her heartwarming videos are even inspiring others to consider fostering.

The foster mom provides safe refuge for teenage girls who have been taken into protective state custody. Knowing that her placements would be scared and disoriented, Burcham decided to put together a “welcome package.”

First, she assembles a basket—including personal care items, a blanket, and fluffy socks—to replace all the essential items a placement may have forgotten when packing for their sudden arrival.

“When a kid is given a trash bag and told to pack their items [in] ten minutes, most of them do not think about deodorant or a toothbrush,” the 35-year-old told BuzzFeed. “They’re grabbing clothes, sentimental items, and their makeup.”

Burcham makes sure to gift all her placements a new bag upon arrival.

“These kids aren’t trash,” she said. “Their clothes and sentimental items aren’t trash … So, if a kid comes with trash bags, they leave with a nice big duffel bag that gives them the dignity they deserve.”

In a now-viral video, viewed over 15.5 million times, Burcham (@fostertheteens) shared her first-night routine for an emergency placement.

After introductions, Burcham asks the foster children if she can run a load of laundry for them. Next, she takes them to her local Shake Shack for a meal in a safe, open environment.

“We can eat and casually talk under twinkle lights on the patio, and it helps them relax and open up,” she told BuzzFeed.

Conversation topics often include school, friends, TV shows, and TikTok dances. Burcham also has a box of conversation cards with prompts such as “dream job,” or “superpower,” to help each teen share more about herself.

The pair will wind down with some TV before bedtime. Burcham will discuss the foster care journey if, and only if, her teens bring it up on their own.

Many supportive well-wishers shared in the comments section that they would consider fostering, based on Burcham’s inspiring tips. A number of foster care graduates also spoke up, wishing they had had a caregiver as kind and thoughtful as Burcham when they needed it most.

Shake Shack responded to the viral video by sending the foster mom a gift card to cover every first meal for her teens in the future.

Despite her now-winning formula, Burcham was terrified of making a mistake the first time she welcomed a placement in October 2019, a 13-year-old girl who had been removed from an abusive home. Yet the pair went shopping for Halloween costumes and Burcham realized her placement was just as nervous as she was.

A guiding principle was born, she told BuzzFeed: “You’re going to do something weird or wrong, but in the end, if you lead with love, the kid will feel that.”

Burcham told Newsweek that she started out as a court-appointed special advocate (CASA) for a child in foster care. Moved by the impact she could make, especially on teens, she applied to become licensed as a foster parent after moving back home to Alabama.

For anyone interested in helping, who isn’t able or ready to foster, Burcham suggests becoming a CASA or mentor for kids in the system.

“There are not enough foster homes for teenagers,” she told Newsweek. “People are scared of teens or just don’t really know anybody who fosters teens, so I wanted to show the positive things that fostering teenagers brings and hopefully encourage others.”

She hopes that her viral videos would teach others that we “don’t ever stop needing a parent, and teens still need love and guidance.”

“They deserve to grow up being treated like the amazing humans they are,” she told Newsweek. “I hope more good foster parents step up to be that person for them.”