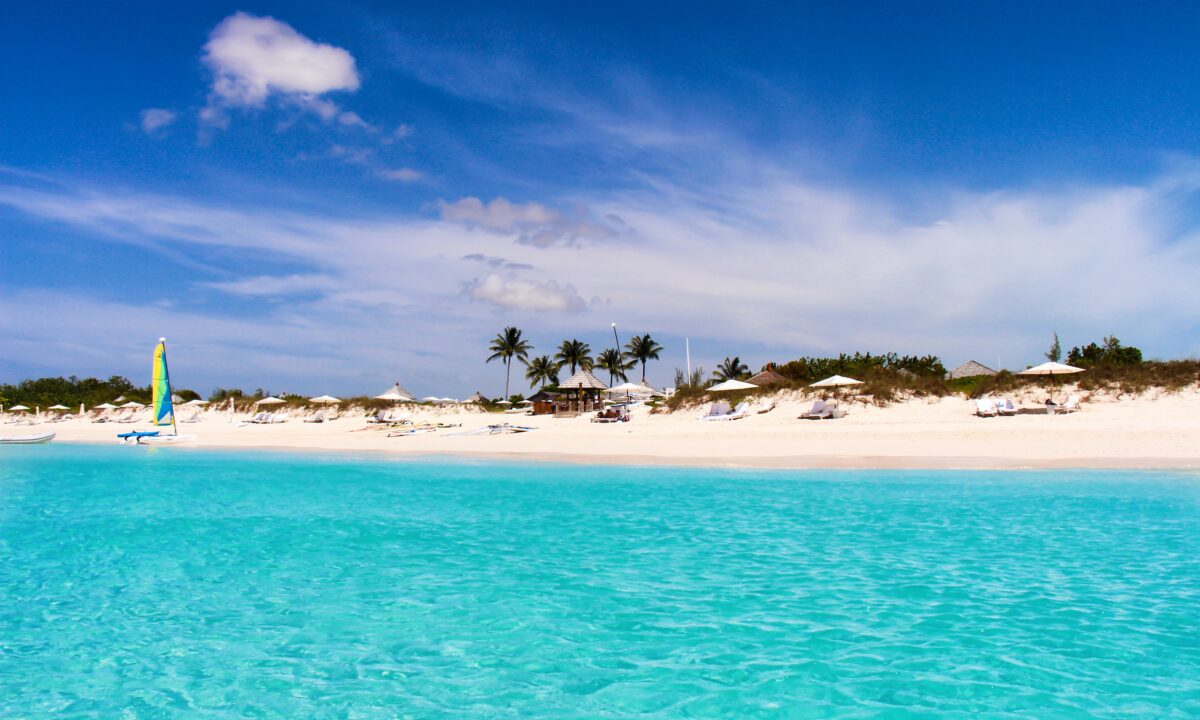 The pristine, romantic archipelago of the Turks and Caicos Islands is at the intersection of the Caribbean and the Atlantic Ocean. Its crystal-clear water provides ample opportunities for swimming, snorkeling, and scuba diving. (Dreamstime/TNS)
Travel

Providenciales, Turks and Caicos Islands—Snorkeling in sparkling, shallow water as clear as glass, my husband and I spotted schools of gemstone-bright fish in colors of sapphire, topaz and amethyst. On the white sand bed of the sea near a tiny atoll, slow-moving heavy-shelled conch sort of rolled along the bottom, skirting other marine life of starfish and sand dollars.

We were in the natural aquarium of the Turks and Caicos Islands, a British Overseas Territory in the Atlantic Ocean on the southeastern periphery of the Bahamas. Geographically, it’s generally considered a part of the Caribbean, which accounts for the startlingly translucent water.

The afternoon sun was fading fast as we climbed back aboard a sleek sailboat that our group had chartered for the entire day. A young mother and her son were excitedly sharing details of their aquatic adventure with the rest of us as the sloop hoisted anchor to set sail back to the dock at Providenciales, just one of the hundred or so islands in the Turks and Caicos, and then to Grace Bay Beach, where our resort was perched at the edge of the turquoise sea.

“We were just snorkeling along and watching all of the underwater color,” the mom said excitedly, her hair still dripping with salt water. “My son was behind me when, all of a sudden, right in front of us was a barracuda. He was staring at us, his mouth wide open, just a mouthful of teeth.”

Talking more rapidly now, she placed her hand directly in front of her face for emphasis before going on, “He was right there. For a just a second, I was mesmerized, and then it hit me that I was face to face with a barracuda. That’s when I decided it was time to go.”

“We saw his teeth,” the son, blond-haired and cute as can be, chimed in with all the high-pitched enthusiasm a 6-year-old can muster.

No one else in the group could claim to have seen a barracuda that day, but it didn’t matter. Our maritime snorkel safari had provided plenty of other mesmerizing opportunities to see the subaqueous kingdom and its spectacular sights.

The pristine archipelago of TCI is almost exactly at the intersection of the serene Caribbean and the often tumultuous Atlantic. Only eight of the 40 or so named islands are inhabited, while the remainder are jewel-like islets, reefs and cays that are among the most beautiful and captivating in the Caribbean basin.

Oftentimes when sea and ocean collide, the result is a frenzied combination of cold winds and white-capped waves. Think of the North Sea and the Atlantic near Scotland or the Bering Sea and the Pacific near Alaska. But that doesn’t happen in TCI. In this magical place where sea and ocean merge into one, the transparent water is warm and smooth as silk. When the sun hits the surface at just the right angles, it reflects radiant prisms of light that cloak the islands with an almost surreal glow. As an amateur photographer, I realize the light is as perfect as it gets.

The Turks and Caicos are divided into two island groups. The Turks of Grand Turk and Salt Cay are more eastward, while the larger Caicos, to the west, include Providenciales, North Caicos, Middle Caicos, East Caicos, South Caicos and West Caicos. The east and west are divided by the 22-mile wide and 7,000-foot deep rift known as Turks Island Passage.

The TCI native islanders are known as Belongers; most descended from Taino and Lucayan Indians, others came to grow cotton or work in the salt industry, and still others immigrated from neighboring countries including Jamaica, Haiti and the Dominican Republic. A large expatriate community of British, Americans, French, Canadians and Scandinavians give TCI an international flavor with their influences and cultures.

Given the archipelago’s population of about 44,000, the atmosphere is unspoiled, uncrowded and definitely unhurried. Time means little here, so the first rule of the islands is to leave your watch at home.

Its land mass poised on fewer than 200 square miles, TCI, with its exotic location, delicate coral reefs and broad expanses of white sand beaches — some 230 miles of them and all as soft as confectioner’s sugar — is a wonderful destination for romantics.

What can you expect to do in TCI? Swim, scuba dive and snorkel, of course. The islands sit on an underwater shelf-like plateau that rises some 11,000 feet above the ocean floor. The edges of the shelf are lined by countless miles of unspoiled barrier reef. All the sports that complement water are here, too: the fishing, kiteboarding, wakeboarding, parasailing, windsurfing, sailing, kayaking and paddleboarding. Boat rentals and private charters are available, as well as golf and ecotours.

But it is food that is the thing. Take your appetite to TCI. It’s all about the seafood. Think queen conch, lobster and fish. The general belief is that San Francisco has more restaurants per capita than any other city in the U.S. TCI easily surpasses that number with a ratio of 74.6 restaurants per 10,000 in population.

In Providenciales, check out Da Conch Shack, Bugaloo’s Conch Crawl and Omar’s Beach Hut for authentic conch dishes. At Grace Bay Beach, good options are Bay Bistro, the Deck at Seven Stars and Infinity at Grace Bay Club. For simpler fare, Somewhere Café, Jojo’s Café and Rickie’s Flamingo Café offer burgers, tacos and fish and chips. More elegant options are Mango Reef, Sharkbite Bar and Grill and Baci Ristorante at Turtle Cove. On Grand Turk, the beachfront restaurants are the casual Jack’s Shack and the Sandbar, while other options include the Guanahani Restaurant at the Bohio Dive Resort and the Birdcage for specialty cocktails at Osprey Beach Hotel.

From beachfront resorts to all-inclusive resorts to boutique hotels to private villas to budget properties, an amazing selection of accommodations are scattered throughout the archipelago. Among the all-inclusives are the family-oriented Beaches Turks and Caicos, the adults-only Club Med Turkoise on Grace Bay Beach and Amanyara, an exclusive luxury resort situated among the coves on the northwest coast of Providenciales. Our stay was at Ocean Club Resorts on Grace Bay, a light-filled resort with spacious rooms, but there are dozens more to choose from, with practically every single one perched on a white sand beach edged with that amazing water.

Dappled with tropical, brilliantly colored and fragrant flowers and trees including hibiscus, bougainvillea, orchids and gently swaying palms, the quiet charm of the Turks and Caicos is the perfect, intimate destination for weddings, honeymoons and anniversaries or just a simple romantic getaway for doing nothing more than relaxing and unwinding from the oddly crazy world that we’ve become.

You’ll need a valid passport and return or onward ticket to enter the Turks and Caicos. Regularly scheduled nonstop flights from the U.S. include New York, Miami, Fort Lauderdale, Boston, Charlotte, Philadelphia and Atlanta on American, United, Delta and JetBlue. Rental cars or taxis are the primary means of getting around, as there is no public transport, bus or train services.
For a comprehensive guide provided by Visit Turks and Caicos Islands, visit www.visittci.com.