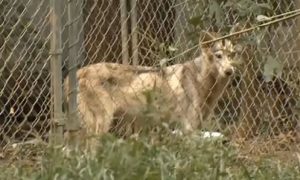 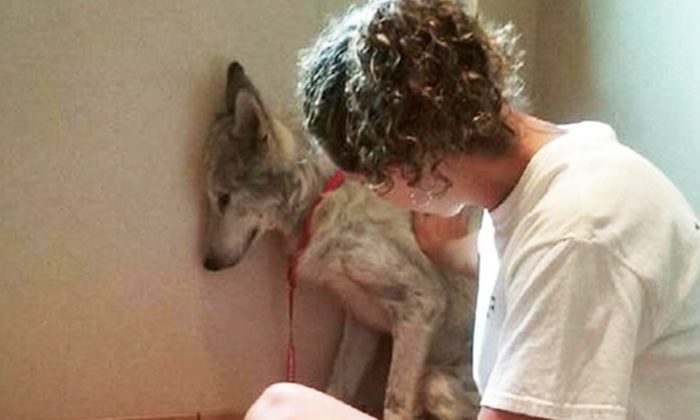 Here is the story of one dog found wandering around Los Angeles, nothing really unusual in that. This dog, however, turned out to be very much out of the ordinary.

“New Boy” was a very unhealthy stray dog living on the streets of Los Angeles in June 2016. Although he had the remnants of a collar around his neck, he was very shy of humans and was severely emaciated, leading locals to believe he had come from a bad home.

They called the local shelter, and that is when they discovered New Boy was no ordinary dog. He was actually a cross between a wolf and a dog, so the shelter would be unable to take him in, as he was classified as a wild animal. He was unable to be adopted into a home, as they are not permitted to be kept as pets.

Wolves share a common ancestor with dogs; there is really not much difference between the two, as just a couple of genes, on the otherwise identical DNA strands, set them apart.

Wolf dogs come about when the two are bred, either intentionally or in the wild. It is estimated that there are around 300,000 wolves in the wild; they are native to Eurasia and North America.

However, New Boy was easy to capture, as his feet were so inflamed he couldn’t escape. If a new home was not found for him, he was slated to be euthanized.

So the race was on to find his new quarters. Sanctuaries for wild animals in California couldn’t find room for him, but luck was on his side, as W.O.L.F. Sanctuary in Colorado was happy to give the then-1-year-old a home.

Before he would make the big move to his forever home at the sanctuary, New Boy was taken to the Wellington Veterinary Hospital, where he was cleaned up and then transferred to an offsite infirmary according to The Dodo.

New Boy was extremely shy though and couldn’t be coaxed out of his corner in the infirmary easily.

“The infirmary was located at her house and we noticed him getting really, really interested in other dogs. So we knew he was starting to get lonely for canine companionship and wanted to find a companion for him,” Michelle Proulx, director of animal care at W.O.L.F. Sanctuary, told The Dodo.

The sanctuary also ran a competition to find a new name for him, as New Boy wasn’t a name that did him justice. The winning name for him was Castiel. Castiel is named after a character from the show Supernatural, who is an angel of resurrection as per Little Things.

Castiel indeed lived up to his name, becoming transformed from a mangy, scrappy, sick creature into a majestic wolf dog.

He needed to interact with other animals at the sanctuary. It was decided he seemed so lonely that they would introduce him to some other female wolf dogs, as after all, love is what matters.

In search of the perfect companion, the sanctuary found a then-3-year-old Wolf named Tenali. Staffers made the trip to the Gray Wolf Wolfdog Rescue in Wisconsin to get Tenali.

“They said she was really sweet and that there isn’t an animal she doesn’t get along with,” Proulx shared.

“We thought that would be great for Cas, who needs that friendship. We didn’t want to have him, while he’s not feeling well, feel like he has to defend or protect himself from an animal that isn’t quite a good match,” she further added.

So when Tenali met Castiel, she was excited and wanted to play with him, but Castiel was really “overwhelmed” with all the attention.

“He went from not having much and being alone for who knows how long to having this girl,” Proulx explained.

Tenali made it to the Sanctuary…she and Castiel met, but Castiel played coy….so Tenali played in her water trough…

However, gradually he started to get comfortable around her. “He started to feel more confident in himself and we’ve been seeing progressively, within the last week or two, that their playing together has become more frequent and more involved,” Proulx explained.

The bond between the two grew stronger with each passing day.

Apparently, Castiel is still shy of humans, but he has a secure home with others of his kind and is free to roam the sanctuary—the best outcome for such a previously sick and lonely wolf dog.

As per the sanctuary’s website, Castiel has a new companion now. When a longtime W.O.L.F. resident, Rajan, passed away, his partner Bella Roux grieved. Thus, the staff introduced Bella to a young pup named Zakai, hoping she would rear it; however, she didn’t want to have anything to do with it. Instead, Tenali showed great interest, so the pup was placed with her. That left Castiel and Bella without a companion, so the two began keeping each other company and have now formed a bond together. As they say, “love heals all.”

The life of Castiel can be followed on W.O.L.F.’s website, where you can also help improve the lives of these creatures caught between the wild and civilization.