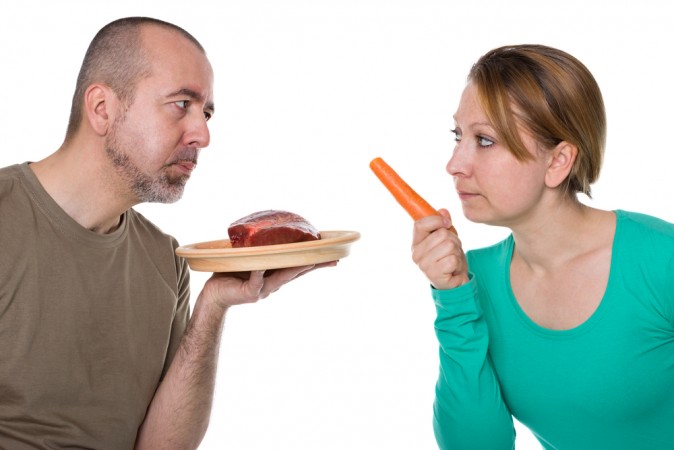 Should You Go Vegetarian to Control Your Blood Pressure?

This increases your risk for a number of more serious health problems, including heart disease and stroke. Interestingly, 16 million Americans who are on blood pressure medication still don’t have their blood pressure under control—a fact that emphasizes the need for basic lifestyle changes in order to truly resolve this problem.

A recent meta-analysis suggests that a vegetarian diet may be part of the solution. Lead author Yoko Yokoyama told Reuters Health:

“For many people, the only treatment has been medication, but that means costs and possible side effects. However, in order to make healthful food choices, people need guidance from scientific studies. Our analysis found that vegetarian diets lower blood pressure very effectively, and the evidence for this is now quite conclusive.”

The analysis included seven clinical trials and 32 observational studies. A vegetarian either excludes or severely limits meat, but typically includes dairy products and eggs. A pescetarian diet will also include fish. One of my friends is actually a healthy 66 year old pescetarian. Vegan diets typically exclude all animal products, fish, eggs, and dairy as well.

Additional Problems with This Study

If you are interested in a very detailed and comprehensive analysis in the flaws in this study, I would encourage you to review Denise Minger’s post from last week. I will summarize some of the salient points below.

It is important to note that 32 of the 39 studies reviewed for this analysis were observational. This means that the researches relied on a dietary history given by the study participants. The actual protein levels consumed by the participants was never directly measured.

Another major issue is that important confounding lifestyle variables were not accounted for. Exercise and alcohol intake are important cofactors for hypertension and they were not analyzed so they could contribute to distorting the conclusions the researchers made.

Please understand that while blood pressure medications are very effective at lowering blood pressure, they do NOT address or rectify the underlying cause of your hypertension.

Research published in 2013 found that vegetarians were 32 percent less likely to develop ischemic heart disease, and many other studies have demonstrated that vegetarians enjoy better health and longer lives than non-vegetarians. Certainly, eating more vegetables is bound to have a beneficial effect. Most people eat far too few of them. But I still do not believe excluding all meats makes for an ideal diet. It’s worth noting that studies such as these are not comparing vegetarians to LOW animal protein diets. I’m also not aware of any studies looking at the health effects of factory farmed versus organically raised meats, eaten at varying amounts, and this, I believe, may be a major part of the equation.

Why I Don’t Recommend Strict Vegetarian or Vegan Diets

There is no debate at all that most people do not eat enough vegetables, let alone high-quality organic ones. So it makes perfect sense that individuals who consume more vegetables are likely to be healthier.

Most Americans eat far too much protein and not enough vegetables, which likely accounts for most of the difference seen when comparing vegetarian to non-vegetarian diets. But that does not justify excluding all animal products.

The other part of the equation that is rarely addressed is the amount of protein consumed. When it comes to meat, two key factors that will determine the healthfulness of your diet are the quality of the meat and the amount.

In terms of quality, meat from pastured or grass-fed and finished animals is FAR superior to that from animals raised in confined animal feeding operations (CAFOs). CAFO beef and poultry has many disadvantages, including fewer of the most valuable nutrients found in organically-raised meats, while being contaminated with hormones, antibiotics, beta-agonist drugs, and pesticides.

Since most CAFOs feed animals genetically engineered (GE) grains (primarily corn and soy), there’s also the issue of whether or not such feed might alter such meats in ways we still don’t fully understand.

There’s reason to think it might. At bare minimum, we know that so-called Roundup Ready grains tend to be most heavily contaminated with glyphosate, the active ingredient in Monsanto’s herbicide Roundup, and research suggests this chemical may be a key factor in the rising trend of many chronic diseases, both in animals and humans.

In 2009, a joint effort between the US Department of Agriculture (USDA) and Clemson University researchers determined a total of 10 key areas where grass-fed is better than grain-fed beef for human health, In a side-by-side comparison, they determined that grass-fed beef was:

Most People Eat Too Much Protein for Optimal Health

So if your total weight is 200 pounds, you would then divide 160 by 2.2 to convert pounds to kilograms and come up with 72.7 grams of protein. If you are doing vigorous exercises or are pregnant, you can add up to another 25 percent or another 18 grams in this illustration to increase your total to 90 grams per day. This would be on the high side. Most women need half of this amount because they have far less lean body mass.

Most meat-eaters tend to consumer far more than that, especially in the US. In fact, the typical American diet is extremely meat-heavy, having risen dramatically over the past century.9 Previous research has suggested the average American consumes about 1.5 grams of protein per kilo of total body mass (lean mass plus fat). This is nearly double the ideal of one gram/kg of lean body mass. Some groups even consume 500 percent more protein than this. And the vast majority of all the meat consumed is CAFO, which only adds to the problem, for the reasons mentioned above.

There are a number of reasons why I believe it’s best to limit your protein intake. The first is that if you eat large amounts of protein your body doesn’t need, it will convert most of those calories to sugar. Additionally, it will need to remove the nitrogen waste products from your blood, which stresses your kidneys.

Excessive protein can also have a stimulatory effect on mammalian target of rapamycin (mTOR)—a pathway that seems to be largely responsible for the pathology seen in cancer growth. When you reduce protein to just what your body needs, mTOR remains inhibited, which helps minimize your chances of cancer growth.

Abstaining from animal protein altogether however, can lead to other health complications. For example, a strict vegetarian or vegan diet can lead to vitamin B12 and sulfur amino acid deficiency, both of which increases your risk of heart disease. Vegans or strict vegetarians who abstain from animal products and do not supplement their diet with vitamin B12 will typically become anemic. Nervous and digestive system damage can also result. Claims that B12 is present in certain algae, tempeh, and brewer’s yeast fail to take into account that the B12 analogues present in these foods are not bioavailable. The only reliable and absorbable sources of vitamin B12 are animal products, especially pastured eggs.

Denise Minger’s analysis also brought two additional interesting additional insights into the protein discussion. It is well established that calorie restriction leads to increased longevity in many animal studies. Newer studies like the featured study suggest that much of the benefit of calorie restriction may be related to lowered protein intake.

The newer twist on the lowered protein intake is that the benefits of protein restriction may actually be related to lowered intake of a specific essential amino acid called methionine which, interestingly, also happens to be particularly high in meats. So a low meat diet will actually be a diet that is low in methionine. But even newer research suggests that it may be the balance of amino acids that is key especially with other amino acids like glycine that may actually help to lower methionine levels.

So approaches like protein cycling in which you replicate ancestral patterns of going through feast and famine can help normalize these levels. That is one of the reasons why I am such a major fan of intermittent fasting. Bone broth may also be particularly useful as it especially high in glycine.

Eating ONLY Plant-Based Foods May Be Bad for Your Heart

Research published in the journal Nutrition, two years ago, shows that people who eat a strictly plant-based diet may suffer from subclinical protein malnutrition, which means you’re also likely not getting enough dietary sulfur. Sulfur is derived almost exclusively from dietary protein, such as fish and high-quality (organic and/or grass-fed/pastured) beef and poultry. Meat and fish are considered “complete” as they contain all the sulfur-containing amino acids you need to produce new protein.

Those who abstain from animal protein are placing themselves at far greater risk of sulfur deficiency and its related health problems. Sulfur also plays a vital role in the structure and biological activity of both proteins and enzymes. If you don’t have sufficient amounts of sulfur in your body, this deficiency can cascade into a number of health problems as it will affect bones, joints, connective tissues, metabolic processes, and more. According to Dr. Stephanie Seneff, a senior scientist at MIT, areas where sulfur plays an important role include:

The 2012 Nutrition study also concluded that the low intake of sulfur amino acids by vegetarians and vegans explains the origin of hyperhomocysteinemia (high blood levels of homocysteine, which may lead to blood clots in your arteries — i.e. heart attack and stroke) and the increased vulnerability of vegetarians to cardiovascular diseases.

From a clinical standpoint, I believe virtually everyone benefits from some animal protein, provided it’s organically raised (grass-fed or pastured). Organic farming also tends to be humane, which is an important issue for most vegetarians/vegans. Even butchering practices are more humane, compared to the factory farm model. That said, if your moral convictions still prompt you to abstain from meat, you do have other options. Other healthy animal proteins include raw organic dairy and organic pastured eggs.

I sincerely believe that the many studies documenting the benefits of a vegetarian diet are related to an increased intake in vegetables and a lowered protein intake. One does not have to throw the baby out with the bathwater and exclude all animal products to receive these benefits. It seems lowering your protein intake to one gram per kilogram of lean body mass would likely achieve similar benefits as documented in this featured study.

Certainly, eating a vegetarian diet is far better than eating a high CAFO meat diet. But I believe most people would be wise to consider a more moderate plan. To summarize my view on what I believe is a more ideal diet for most people, here are the key points:

One of the easiest ways to conform to these guidelines is to ditch processed foods and cook from scratch using whole, organic ingredients. I generally advise limiting processed foods to 10 percent of less of your total diet. As for whether or not to eat meat, I firmly believe that it plays a valuable role in optimal health, but quality and quantity are important considerations. Focusing on smaller portions of higher quality (read pastured grass-fed and finished) meats will lead you in the right direction.

*Image of “meat or carrot” via Shutterstock