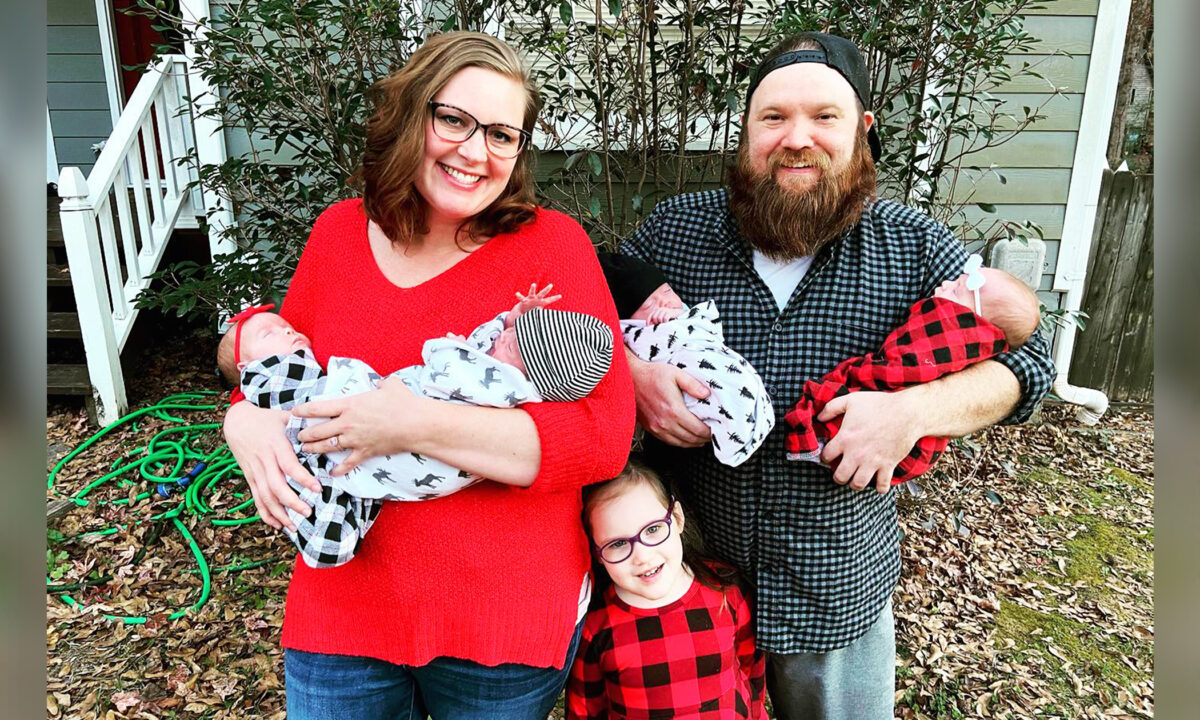 ‘Shock of a Lifetime’: Mom Gives Birth to Natural Quadruplets With 1 in 700,000 Odds

A Georgia mom who thought she was preparing for her second baby got the shock of her life when an eight-week ultrasound revealed rare, naturally-conceived quadruplets. The quads, born at 28 weeks, are now 5 months old and thriving.

Madison Collier of Marietta reflected, “I never thought it’d be me, but I really love it.”

The 34-year-old teacher said she was not on any fertility treatments and has no history of multiples in her family, so it was definitely “the shock of a lifetime.”

Thinking her eight-week scan was just a routine appointment, Madison attended it all alone, unaware that she was going to get a huge surprise.

She told The Epoch Times: “I freaked out, started hyperventilating in the office, and ended up calling Justin [Madison’s husband]. He was very, very shocked, I ended up sending him a picture because it was just so crazy.”

The couple, who met in high school, then broke the news to their 4-year-old daughter, Isla.

Naturally-conceived quadruplets are as rare as 1 in 700,000, according to the American Society for Reproductive Medicine.

Madison recalls her pregnancy with the quads as healthy, albeit painful, owing to the rate at which her body was stretched to accommodate four growing babies.

The quads then gave a surprise to their parents by making their “fast and furious” entry into the world at 28 weeks on Sept. 3, 2021, almost three months ahead of their due date of Nov. 26.

Feeling a “tightness” after returning home from work, Madison headed to Northside Hospital in Atlanta with her husband, where doctors confirmed she was in labor. Efforts to subdue her contractions, however, didn’t work.

Babies Callaway, Eliza, Iris, and Wilder—weighing between 2 pounds 5 ounces and 2 pounds 10 ounces (approx. 1.04–1.19 kg)–were born within minutes of one another. They were then placed on oxygen and feeding tubes in the NICU to help them gain strength.

The Colliers have not yet had testing done to confirm whether the babies are identical.

“The girls, to me, look really similar,” said Madison; “the boys, now that I’m getting to know them, seem a little different. It’s possible that they’re all fraternal, but again, it could have been the early split of an egg which still could result in identical twins.”

During the quads’ stay in the NICU, Madison and Justin visited daily.

“At first we couldn’t really hold them, but it was quickly that we were able,” said Madison. “After a while, we were able to start helping with changing and feeding, and then they came off oxygen and it was really great.”

Callaway had the “hardest time,” she recalled, yet all babies came home within three days of one another, after a little over two months in the hospital.

After being discharged from the hospital, the logistics of caring for four newborns at once hit home for the Colliers.

Dressing and undressing, diaper changes, bath time, and making bottles dominated their schedule—”everything takes a long time,” said Madison—and three-hourly day feeds, lasting an hour each, disrupted the parents’ sleep routine, allowing them to sleep for only two hours in a row, which, according to Madison, was really “exhausting.”

However, at the time of writing, Madison claims the quads sleep around five hours straight per night, take naps, and are “pretty much normal babies.”

As to how effectively they manage their time while working and caring for their babies, Madison reveals that Justin, a marketing consultant who works from home, watches the babies while Madison works part time in the mornings, and sitters help a few times per week.

“Our life is different, but we’ve adjusted,” Madison reflected. “We kind of have a system down; I figured we’d get there, and we did.”

The one residual shock for the Colliers is the expense of caring for a five-children family. To help with it, they started a GoFundMe page, and have also received support from their Marietta community, including a diaper drive from Isla’s preschool, a family van from Beaver Toyota, and six months of their mortgage paid off by local radio station The Fish.

“That was a huge blessing,” said Madison.

The proud mom claims her babies, now 5 months old, are all “very sweet” and are developing unique personalities: Iris is the laid-back one, Wilder lets his parents know what he needs, Eliza loves to eat, and Callaway is relaxed and smiles a lot.

Meanwhile, Isla has taken to her role as big sister like a duck to water, and is “almost like a teacher” to her siblings, said her mother. She reads and plays with them. Additionally, she also helps with their bottles, picking their clothes, and holding them.

“We’re really blessed, they’re very good babies,” said Madison. “It’s not something we ever expected, but it’s wonderful, and now that we have them, we obviously love them dearly and couldn’t imagine a life without them.”