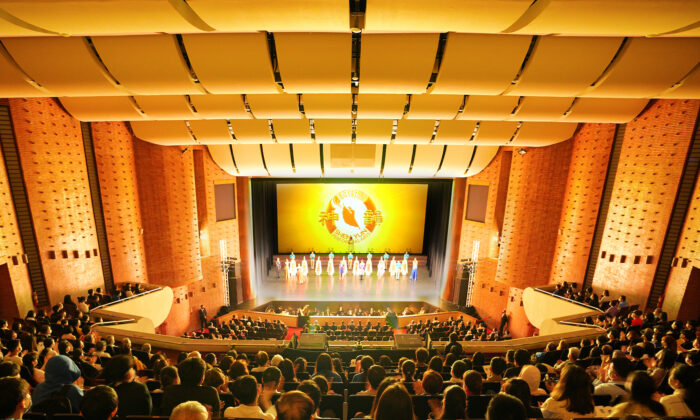 CHIAYI, Taiwan—Beauty can have a positive effect on people. Shen Yun Performing Arts has kick-started its tour of 27 performances in Taiwan. The International Company will be sharing beauty and hope, sending positive vibes to its audiences.

The downpour did not stop the audience from filling the seats of the two performances on the first day of Shen Yun’s tour in Taiwan—wearing masks, filled with anticipation to bring home Shen Yun’s positive energy.

President Tsai Ing-wen, Chiayi County Magistrate Weng Chang-liang, and City Mayor Huang Min-hui sent congratulatory flower baskets with their good wishes for the first Shen Yun performance in Taiwan. In particular, Chiayi County Government purchased over 200 of the best seats for front-line epidemic prevention personnel. The government wanted to show their gratitude for the services of those hard-working men and women.

Chang Lung-Hsiung, sales director of Shang-I International Company, was deeply moved by the last scene. He said: “It was overwhelming! The whole scene is magnificent. It feels like the Buddha’s light is illuminating and forming a very strong magnetic field!”

“If you do not want the virus to harm your body, you have to look at things with positive energy, and you have to watch Shen Yun!” said Chiu Wan-Chi, supervisor of the Taiwan Tea Oil Industry Development Strategy Association. “[Shen Yun] can turn evil thoughts into righteous thoughts, get rid of evil spirits. Shen Yun will give many performances in Taiwan this year and, all parts of Taiwan will be able to recover and return to normal!”

“The performance brought me positive energy, swept away the darkness and helplessness in my mind, and soothed the anxiety induced by the epidemic!” ­­­­­­­­­­­­­said Liu Hai-Lun, president of Kiwanis Taiwan Douliu Branch in Yunlin District. She burst into tears when speaking to the reporter. “Watching Shen Yun made me feel very energetic as it gives people confidence in life. I want to pass on this positive energy!”

“The fact that Shen Yun Performing Arts is willing to perform in Taiwan during the pandemic demonstrates their resolve and perseverance!” said dance teacher Jolin Chen. “Because of the epidemic, everyone is bored.” “Don’t be so afraid, protect yourself and wear a mask. Epidemic prevention is well done in Taiwan, and (I) would encourage people to step out to come and see Shen Yun.”

Shen Yun Presents the Beauty of the Heaven

“I’m really touched, how can there be such beautiful dance and music?” Wang added. “I’ve never seen those colors before!” “Every moment was magical.” “I feel ever so hopeful about life now and confident that I can find a direction in my life in these uncertain times!”

“Shen Yun’s performance showed me Gods, Buddhas, and the beautiful scenes of heaven. It has brought the audience to an unimaginable and special realm, allowing people to reinvigorate their minds and bodies,” said Chen Chun-Liang, a retired deputy bank manager who worked in financial investment. “Taiwan (adopted the policy) to coexist with the virus, we, therefore, can have the opportunity to see this performance, which is impossible under China’s ‘lockdown’ approach. This is the biggest difference between Taiwan and China.”

“No need to be afraid of the wind and rain, no matter how the weather is, as long as you are willing to come out and watch Shen Yun, you will be rewarded!” Chen added that he was a bit concerned by the torrential rain in the afternoon and debated whether to come to the performance, and he felt fortunate that he did. “Now that the show is over, the weather has cleared up, and it’s like my soul has been washed clean as well.”

Be Awaken and Inspired by Shen Yun

“Some audience members immediately turned around to buy tickets for the evening show as they absolutely wanted to watch it again!” said Ms. Chen, a ticketing officer in Chiayi.

“My body, mind, and soul are all active now! You know, the whole environment has been a little dull and down, but now it seems to be revived!” said Hsieh Shu-Chen, the 13th President of Chinese Women’s Business Association. “My feelings are lively and activated, (Shen Yun) has an inspiring effect on human nature.

“Seeing it again after three years, my heart is deeply moved,” said Chou Yu-Hsien, President of Chung Cheng University Alumni Association. “This performance is a real classic, which shows infinite sophisticated beauty that touches all souls and is for all to enjoy.”

Liang Hui-Chen, deputy director of the Yun-Chia-Nan branch (300-D1) of Lions Clubs International, has watched Shen Yun many times and is still “deeply amazed” after seeing the performance on June 7. In addition to the highly educational content that aimed to restore traditional culture, the colors of the costumes and the special effects on the backdrop also deeply impressed Liang. She praised the performance’s showcase of truth, goodness, and beauty that brought positive energy during the pandemic.

“The performance makes people realize what is true, good, and beautiful,” said Yen Chung-I, Yunlin County Councilor. This is the first time that Yen has seen Shen Yun. He said: “Shen Yun has the power to transform people, uplift people’s minds to experience the realm of pure truth, pure goodness, and pure beauty. All these are the real essence of Chinese culture, and what needs to be passed on to future generations through education of morals and traditional culture.”

Tai Chang-Lung, the director of Tai Chang Lung Clinic, was one of the top 100 doctors in Taiwan. His clinic was selected as one of the top ten dermatology clinics in the country. As an “iron fan” of Shen Yun, Tai said: “I started following Shen Yun when I was in my 40s, and I just turned 60 this year. This year’s performance especially made me realize the mission God gave me in this world.”

“The performance is a breathtaking spectacle; the program is very refreshing, refined, and very original. And I feel like its power penetrated my muscles and bones,” said Liao Wei-Tang, a landscape designer and amateur poet. “I felt the performance has taken me to experience another level of life.” “The visuals are all so memorable, the content is easy for all to relate to. Especially the dynamic backdrop, the seamless integration of animation and stage characters, which makes one wonder how Shen Yun does it at all!”

Liao also emphasized that after seeing Shen Yun, “I will let the whole world know and mobilize more to come and see Shen Yun with their own eyes! “

Reporting by Epoch Staff in Chiayi.