Shen Yun’s Message Worth the Wait 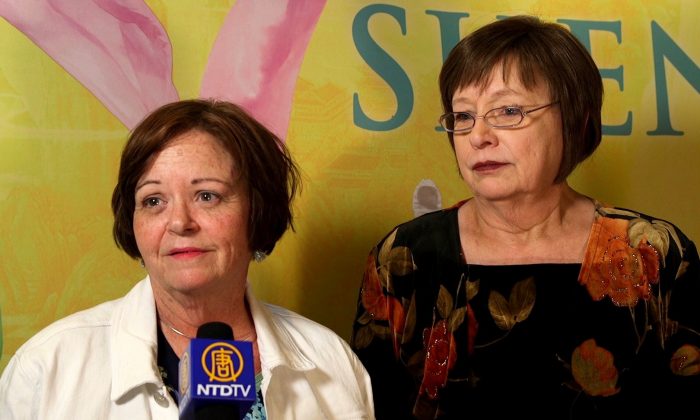 (L–R) Cheryl Decker and Diana Nelson ever dreamed that Shen Yun would be so uplifting. (Courtesy of NTD Television)

INDIANAPOLIS—Two ladies waited years to see Shen Yun Performing Arts and finally they were able to come to the performance at the Clowes Memorial Hall on March 8, the opening night of a two- performance stint at the theater.

Cheryl Decker, a floral designer, said she waited five years to see this classical Chinese dance and music company. In years past, either she didn’t have the money or couldn’t find a family member to attend with her.

Diana Nelson shared a similar story. As a member of the Clowes membership association, she knows everything that the facility is hosting, and she’d always wanted to come. But the furniture designer said one year she lacked money, another time she was too sick.

Was the wait worth it? Definitely. Ms Decker felt it was such a beautiful performance with a lovely message, “I had no idea it would be like this.”

“It was so much better than I had even imagined,” Ms. Nelson said, referring to the fact that the story of “China is not what we think it is. It’s much deeper.”

Shen Yun brings the apex of Chinese art, classical Chinese dance, to the world in order to share the pinnacle of China’s culture—a time when culture was based on harmony between heaven and earth.

Several of Shen Yun’s individual dances show the struggle of people in China since the communist overthrow after WWII.

Ms. Nelson felt an urge to get the word out about Shen Yun’s mission and help the Chinese people.

Explaining, Ms. Decker said that it was her impression that the Chinese people are desperate for a peaceful life and just tired of being pushed around. That’s biggest message, she felt.

“They need the world’s help. They really do. It’s a big population over there and we really need to get more involved with the people on a personal basis,” she said.

She felt Shen Yun’s performance was so much more than just dancing and music. “It was so uplifting.”

“You don’t know how good this made me feel,” Ms. Nelson said. She was so moved by the stories, and the mention of a Creator. As a Christian, she tries to live the messages she saw in the show every day.

“It’s a big world out there, but really when it comes right down to it, for those of us who believe in a Creator, it’s not that big of a world after all,” she said.

Both ladies agreed that they definitely will be back next year.