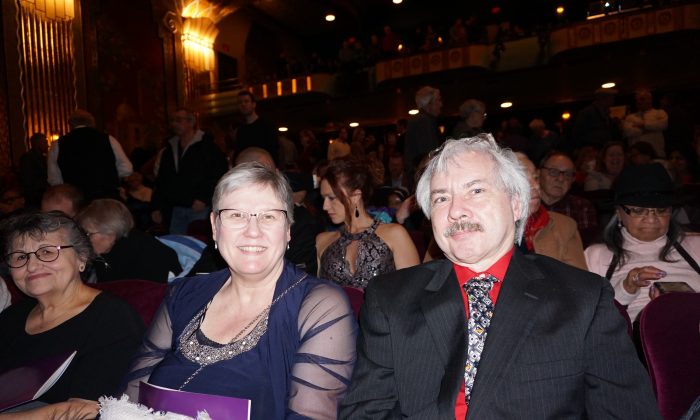 AURORA, Ill.–The performance promised culture and dance, but some audience members took home much more, in the form of profound thoughts and beliefs.

Mrs. Sadger is a former longarm quilter. She and her husband Scott braved the winter weather in Southwest Chicagoland to enjoy some classical Chinese dance.

As Shen Yun’s website explains, this dance form is what Shen Yun is known for. “Known for incredible flips and spins, and it’s gentle elegance, it is one of the most rigorous and expressive art forms in the world,” the company’s website states.

“I especially thought the piece on how people [were] being persecuted for their faith, was extremely moving. And it’s nice to know that they’re bringing awareness through the [dance] of issues that are going on in China,” she said.

The particular issue she’s referring to here is the persecution of Falun Dafa. Falun Dafa, also known as Falun Gong, is a peaceful meditation practice that follows the guiding principles of truthfulness, compassion, and tolerance. Practitioners of Falun Dafa have been brutally persecuted by the communist regime in China since 1999.

Having read in the program that many of the performers practice Falun Dafa, Mrs. Sadger noticed how much like a family they seemed, and how well that affected their stage presence.

She said, “Probably the practice of their religion as a unit helps with that, and their belief system. … The expressive movements that they have, and their facial expressions, they’re taking joy in sharing their history and their faith through this, and letting people—the awareness is so important, too. And I wish there was more written about their faith.”

Mrs. Sadger thinks it’s very important for people in today’s society to believe in something higher than ourselves.

“I think when you decide to cut out people’s faith, whether they call it a universal faith or a specific religion or whatever, I think when you cut that out, and people think there isn’t anything, it takes away the hope that there’s a better future, that there’s a better life,” she said. “And it leaves people to their own devices of like there’s nothing so why care about anything, for me there’s no consequence.”

“You know, ‘if there’s no consequence, so what difference does it make?’ If you know that there is more than just yourself, there’s people around you, and beyond that, there’s the universe around you, the divine beings, then you have a reason to improve your life, improve those people’s lives around you.”

“For 5,000 years divine culture flourished in the land of China. Humanity’s treasure was nearly lost, but through breathtaking music and dance, Shen Yun is bringing back this glorious culture,” the Shen Yun website states.

Throughout the Shen Yun performance, around 20 or so vignettes showcase ancient Chinese history, legends, folklore, and literature. Many of these pieces involve the interaction between humanity and celestial beings.

“Divine beings coming to help people—that’s a faith that every nation in the world has, and China has a very long history where they have really tried to be in touch with the higher self within each person, and they’re trying to bring that forth,” Mrs. Sadger said.