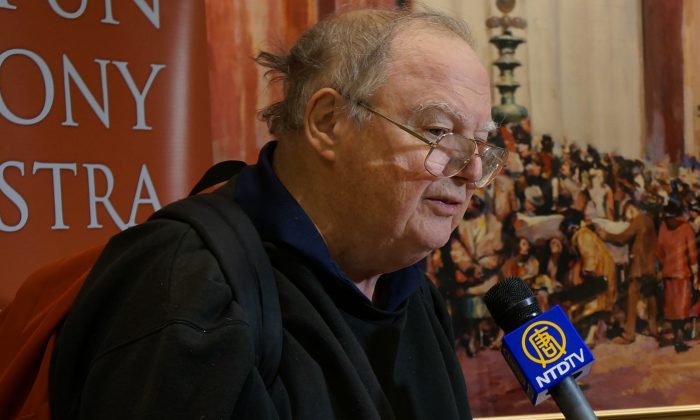 Mr. Bart Jordan attends the Shen Yun Symphony Orchestra concert at Boston Symphony Hall on Oct. 9, 2013. He said, "I think it is one of the most precise, and one of the most well-coordinated orchestras I have heard." (Epoch Times)
12- OBSOLETE

BOSTON—Classical guitarist Bart Jordan was astonished by the masterful blending of classical Western instruments and traditional Chinese instruments in the Shen Yun Symphony Orchestra after he listened to the orchestra’s concert at Boston Symphony Hall on Wednesday evening.

The Shen Yun Symphony Orchestra is part of the internationally acclaimed Shen Yun Performing Arts, a New York-based classical Chinese dance company. Up until recently, the orchestra could only be heard as an accompaniment to the dance performances. This year, the orchestra is on a seven-city tour across the United States, putting on 10 concerts altogether.

According to Shen Yun’s website, there is no orchestra like Shen Yun’s. The orchestra is the only one in the world that combines both classical Western and Chinese instruments as its permanent members.

“The fact that they [Shen Yun] have been so successful with it, giving off a reflection of East within the West, and the West within the East, almost like a yin-yang, is absolutely a credit beyond measure.”

In other words, Shen Yun has “found the way to marry the [two styles], and successfully,” Mr. Jordan said.