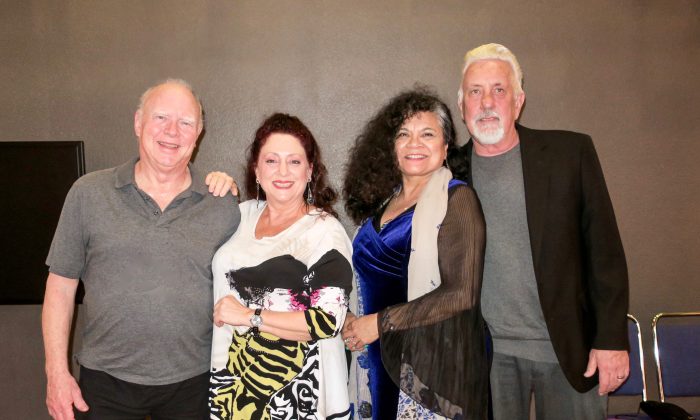 SACRAMENTO, Calif.—John and Karen Zimmerman are frequent patrons of the ballet, so when they saw that Shen Yun Performing Arts was to perform at the Sacramento Community Center Theater, they were captivated by the idea and presentation of classical Chinese dance.

It wasn’t a hard decision—not long after they discovered the acclaimed dance company, friends of theirs called them up and asked if they wanted to attend.

“Prayers: Answered,” Karen said with a laugh. The Zimmermans and their friends ended up seeing the opening night performance in Sacramento, on Jan. 9.

“I love the diversity, love the moves. It was amazing. The moves were absolutely amazing. But really for me was all about the colors,” Karen said. Karen was a professional photographer, and she joked that she had a hard time remembering she couldn’t take photos of the vivid and amazing things she was seeing on stage.

“One of the things that I noticed right away is so many colors that I didn’t think would go together, went together beautifully. I was very surprised and just loved it. Just loved the colors,” she said.

From the gowns of goddesses to the elaborate garments of kings, New York-based Shen Yun designs an all-new program every year and hundreds of all-new costumes to go along with it. The company was formed by artists in 2006 with the mission of reviving the authentic traditional culture through music and dance, and they travel the globe every year performing in top venues.

In just a dozen years, Shen Yun has grown to be the premier classical Chinese dance company and brought groundbreaking designs to the world stage, including a uniquely patented animated backdrop.

The use of the backdrop allowed the performers to appear on stage in one moment and fly off to the heavens in another, the Zimmermans explained, and the timing of the performers to pull this off had been impeccable.

The timing of everything—from the tips of the dancers’ toes to the ends of their long, flowing water sleeves; from the bowing of the orchestra players to the gravity-defying leaps—was so perfect the group had to suspend disbelief. They found themselves peeking into the orchestra pit as well, watching the musicians work seamlessly with the performers on stage.

Karen said it just brought a smile to their faces.

“You know,” John added, “in a troubled world, this is so refreshing to see something beautiful like this.”

John added that there was a beauty to the performance that went beyond the visual. There was a spiritual component to it, as traditional Chinese culture is a spiritual one, and the universality of what he saw rang true.

“I love the message, the spiritual message through all of it,” he said. “The idea that we were sent here on Earth to try to make things better and once we do we’ll return to where we came from. I think that’s a beautiful message.”

“All I can say is I highly recommend you come see the show if you haven’t seen this already. It’s a new cultural experience,” he said. “At least it was for me and it will be for you too.”

With reporting by Chiawei Lin and Catherine Yang.