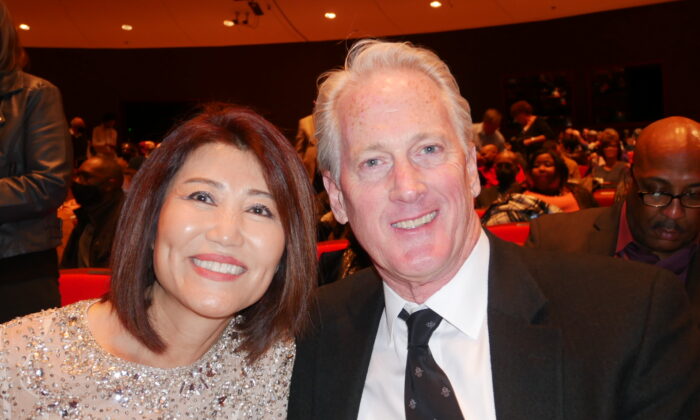 ATLANTA, Ga.—There is something for everyone in the Shen Yun Performing Arts production. For James Rogers, a senior vice president of a bank, it was the positivity of the performance despite the difficulties that Shen Yun faces.

“It’s a beautiful culture and it’s very sad. Actually, in China, they cannot perform this, and I heard a lot of people are flying from different countries to actually watch the performance, so I’m very proud that you keep up with this culture and keep it up. Thank you for the performance,” he said.

Shen Yun is based in New York but is not allowed to perform in China. However, the company upholds its mission to revive 5,000 years of Chinese culture through dance and music.

Mr. Rogers added his appreciation for the artists of Shen Yun and their effort.

Shen Yun‘s orchestra is a unique blend of traditional Chinese instruments with a classical Western orchestra as the basis of the ensemble.

“The music’s been very beautiful. The orchestra is doing a good job too. The singer was great and I appreciated that you could read English below and understand what the words were about,” Mr. Rogers commented.

It’s a positive message and it lifts you, certainly, that’s true.
— James Rogers

He added that the positivity of the performance leaves the audience feeling good and uplifted.

“Because it lifts you. It’s a positive message and it lifts you, certainly, that’s true. You can feel that because of the energy,” he said.

Peter Allor was also in the audience. He was impressed with Shen Yun’s use of a digital backdrop.

Shen Yun uses a patented digital backdrop that allows the stage to transform from scene to scene without the use of bulky props.

“That was amazing,” Mr. Allor said. “I really like how they synchronize the dance with the technology showing how [a performer] flies away.”

He noticed that there were similarities between the spiritual beliefs of China before communism and Christianity.

“I’m watching the Chinese thought process about heaven. You see the theme of everyone always looking for a Creator, something bigger than what they are,” Mr. Allor said.

He also complimented the orchestration and how the music worked so well with the choreography.