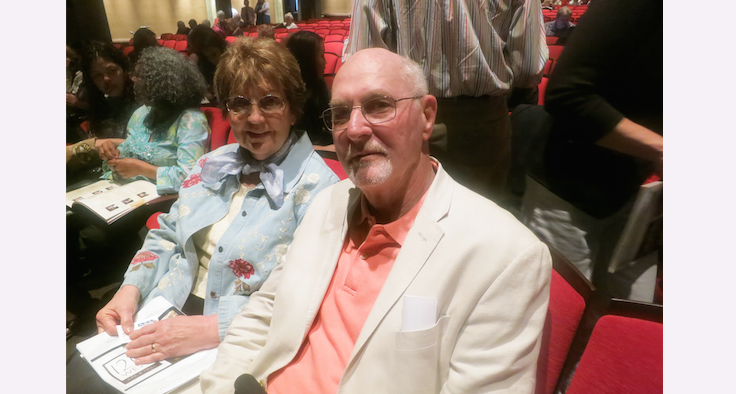 Shen Yun brings traditional Chinese dance and culture to the world, stopping in Indianapolis on the last leg of its Midwest tour. The couple saw the performance on April 19 at Clowes Memorial Hall of Butler University.

For Mr. Baker, formerly general manager for three Ford Mercury Dealerships in Washington, Ind., what he saw in Shen Yun was grace: “In the States we just don’t have that kind of grace, I don’t think. It is just beautiful to see it displayed on the stage.”

As the premier classical Chinese dance company in the world, Shen Yun is renowned for its grace, as well as for the physically demanding aspects of the dance, its difficult aerial flips, spins and leaps.

“We love it. The athleticism in the dances is just phenomenal,” Mr. Baker said.

Margaret Baker agreed that Shen Yun dancers are graceful and used adjectives like “finesse,” “delicate,” and “beautiful” to describe them.

But she saw something else. She saw a quality of patience beneath the grace. In trying to describe her understanding, she said that China’s long history contributed to it: “it’s just … the delicacy, and the smoothness, … it’s just—there has [to] be a great patience through all these centuries, whereas in this country we are fearless. We go get it today, and if we don’t get it today, we are frustrated.”

Mr. Baker thinks the Shen Yun’s mission to revive 5,000 years of traditional culture is “something they need to continue.”

Shen Yun faces an uphill battle in that the company cannot perform in China today due to the suppression of traditional culture by the communist regime.

But Mr. Baker has hope for China’s future. “I am sure that—I feel quite confident—that they will maintain it; they will overcome. I think they will,” he said.