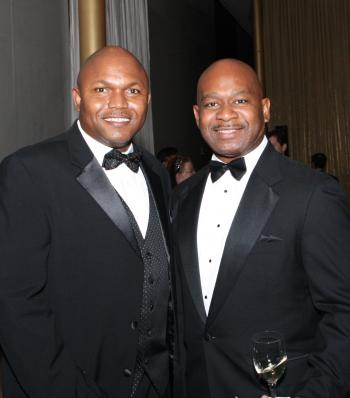 ‘All of the show was wonderful’

Nowhere in China can people see a show like Shen Yun, which features an unusual variety of music and dance performances. In Imperial Archers, for example, the dancers demonstrate a skill deemed necessary to a distinguished gentleman of ancient times. In the story-based dance Wu Song Battles the Tiger, Wu Song kills a tiger to protect some townspeople, and he does so, miraculously, while drunk from imbibing at the local inn.

Besides the dance pieces, musical performances feature show-stopping vocals and traditional Chinese lyrics; the Chinese into English translations of these are displayed on the screen. One musical highlight is the erhu virtuoso Xiaochun Qi, who captivates audiences with her soulful mastery of the traditional Chinese instrument. The instrument is similar to a violin, but features only two strings.

Curtis McCarlie and his friend John Kendrick, on seeing Shen Yun for the first time, both noticed universality in the messages and themes displayed on stage.

“Music and art brings us together,” said McCarlie, a field manager for a concierge company servicing 100 properties in the D.C. area.

“No matter who you are or where you come from, dance is one of those things that everyone [can relate to],” said Kendrick.

Kendrick commented that he was reminded during the performances of different cultures in places that he has traveled to, such as Polynesia and Honduras. For him, it was either the color combinations or the different dance movements that spoke to him of this familiarity.

Adding to his friend’s comment, McCarlie said, “As far apart as we are, in different countries and locations, we are still very close, and humankind in our interaction and things that we are, and the things that we do, our expressions are very close. We are very far, but we are also close and that is what it is all about. ”

According to the Shen Yun Performing Arts program book, “Perhaps no other art form in the world boasts such strong expressive qualities and diversity of technique as classical Chinese dance.”

Chinese culture has a history of 5,000 years, and it is considered one of the oldest cultures in the world. Ancient China—think ‘silk road,’—established wide and varied trade ties with foreign peoples. The idea that ancient cultural traditions also traveled and were borrowed seems to make sense.

In fact, Shen Yun emcees, Jared and Kelly, also tell the audience that elements such as the many jumps and tumbling techniques featured in Shen Yun were borrowed from classical Chinese dance and over time became what we call gymnastics today.

Kendrick felt that the expressive quality of the dance was so detailed that even if he was given no context from which to understand it, he could follow the story well, simply based on the flow of the dance.

“It told a story. You knew what happened,” said Kendrick.

“The one where they gave you that prelude to it that even in China today a person doesn’t have a right to express what they feel, even if that had not been there you would have been able to figure that this is what it is all about,” added Kendrick, a hospital administrator living in D.C.

“All of the show was wonderful.”