Shen Yun Vocalist ‘Like She was Singing From Heaven’ in St. Louis 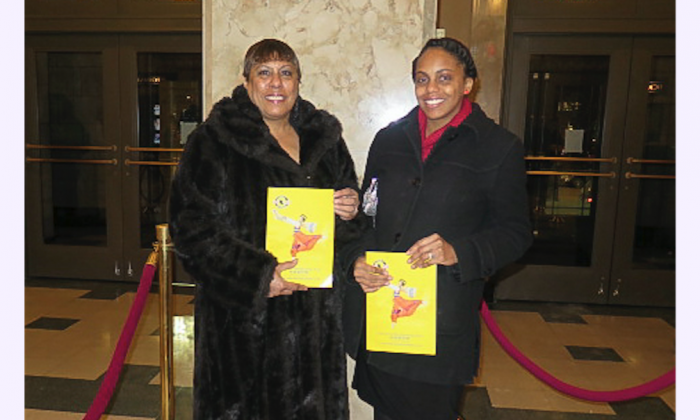 ST. LOUIS—Jessica Brookes, a veterinarian assistant, was mesmerized by the posters dotting the windows in St. Louis’s storefronts to announce the coming performance of Shen Yun Performing Arts at the Peabody Opera House. Her enthusiasm spilled over to her mother, Glenda Reynolds, and they bought tickets to attend the Friday evening performance on Feb. 12.

Both women were very moved by the various aspects of the performance. For Ms. Reynolds, watching the dancers made her feel “wonderful inside, all warm and glowing,” she said.

“It was the dancers putting on their dancing, their emphasis … on details. I can’t really explain it,” said Ms. Reynolds, who is retired from Harris-Stowe State University. “It was just heartwarming.”

The essence of traditional Chinese culture and beliefs was presented both in the dance, and in the lyrics of the Chinese bel canto solos performed by tenor Tian Ge and soprano Haolan Geng, according to the program book. The words and translations were projected onto the digital screen, lyrics with philosophical themes reflecting on life.

Ms. Reynolds said the tenor’s voice was explosive. “Oh my goodness, he could really sing,” she exclaimed. “Oh my goodness, the soprano vocalist was “like she was singing from heaven. All of them had wonderful voices. A beautiful God’s gift.”

Mother and daughter found they both learned more about traditional Chinese culture and belief in the divine due to the performance. “It was eye opening to learn about … a new culture,” Ms. Brookes said.

“It made me feel like I was more knowledgeable about Chinese culture, their history, and what’s happening to them right now,” Ms. Brookes explains.

“I didn’t know some of those things were happening [in China],” continued Ms. Brookes “I didn’t know that they were being persecuted for their beliefs. So, I feel kind of sad, but I feel really great that they can portray it in their shows. It’s really beautiful to see.”

So Many Stories Through Dance and Interpretation

Mark and Kim Thom attended the same performance on Feb. 12 at the Peabody, and they too were impressed with the cultural rich performance.

“It was tremendous,” said Mr. Thom, owner of a St. Louis based consulting business. “I like that it told so many different stories through dance and interpretation.

To the ancient Chinese, spirituality was very important and a part of everyday life. Today, the current regime in China is officially atheist, according to the Shen Yun website, and spirituality in a traditional sense is in ruins.

“It was just interesting to see the spirituality of it and talking about heaven,” added Mr. Thom.

“I didn’t know coming [into the performance] that it was going to have such meaning,” said Mrs. Thom. “I see now the deeper meaning of it—the religious meaning, what the Chinese people value, and that they are not allowed to worship now the way they want to.”