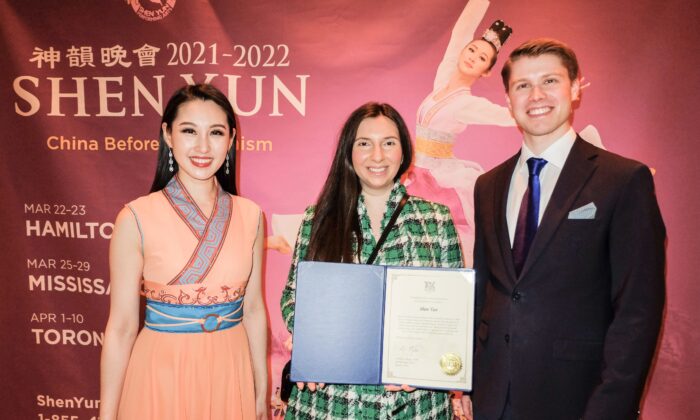 TORONTO—Ontario MPP Christina Mitas said she was moved to tears by one of Shen Yun Performing Arts’ dance pieces depicting the persecution of Falun Dafa adherents in communist China today.

“I thought that was very, very powerful,” Ms. Mitas said.

“It was a very good balance of difficult things and beautiful things,” she noted, referring to the suppression of the spiritual practice of Falun Dafa, also known as Falun Gong, and the peaceful resistance of its practitioners.

The story-based dance is one of about 20 vignettes in the Shen Yun performance that takes the audience on a journey through China’s 5,000 years of history and culture, from ancient times to the present.

New York-based Shen Yun was founded in 2006 by a group of leading Chinese artists united by a mission to revive the traditional culture of China, which has been nearly all but destroyed under communist rule.

The performing arts company presents classical Chinese dance and music, travelling the world visiting over 100 cities each year to stage its performances.

This was the second time Ms. Mitas has seen Shen Yun. She previously attended a few years ago with Doug Ford, who is now the premier of Ontario.

“There was nothing that was the same. It was absolutely amazing. It’s all-new,” she said, referring to Shen Yun’s entirely new programming every year. “It was just breathtaking.”

Ms. Mitas said Shen Yun gives people “a chance to get away” from everything that is going on in the world but at the same time prompts them to reflect on the various themes presented in the dances, music, and storytelling, as “every part of life, every facet of life, is something that we’ve seen here tonight.”

Many audience members have expressed how they found those themes, such as faith, compassion, courage, and hope, very relatable to their everyday lives and very uplifting.

“There’s something that we can learn [from the performance],” she said. “I think that more people should come out and see this show, so that they can connect the dots as well, and reflect on those things.”

Kevin McGovern and Kim Rogers flew from Moncton, New Brunswick, to Toronto, a distance of over 1,500 kilometres, just for the one night of April 8 in order to see Shen Yun.

“It’s amazing, when they show the colors, the dance, the culture—incredible,” said Mr. McGovern, who is a pilot, adding that the culture of China “is deeper than you could ever imagine, so it’s something to be proud of.”

Ms. Rogers was equally impressed with the Shen Yun performance.

“I think it’s fantastic. The colors are just incredible, and the way that they move is phenomenal. It’s absolutely wonderful,” said Ms. Rogers, who works as a sales coordinator. “I’ve never been to anything like this in my entire life, and I will definitely come again.”

Ms. Rogers was amazed by Shen Yun’s animated backdrops and the interaction between the dancers on stage and the images in the background scenery.

“It is absolutely incredible how they could do that,” she said of the patented system and method for integrating a stage performance with its digital background.

Mr. McGovern said he’s been to many shows but Shen Yun is “completely different” from what he’s seen before.

“If you live anywhere within driving distance [of a Shen Yun performance], you’d be crazy not to come,” he said.