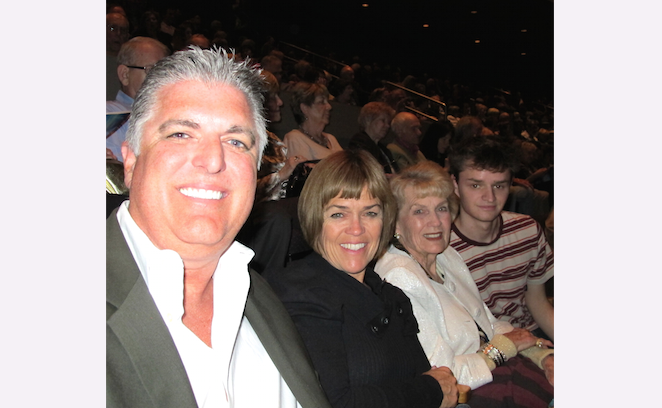 Mr. Everett is a businessman and his wife, Kathy Everett, comes from a family of professional ice skaters. Mrs. Everett was a performer in the Ice Capades, a popular touring show performed on ice.

She added, “We appreciate the dance and the technical ability of it, and the performing and the timing of everything.”

Shen Yun’s website explains, “Classical Chinese dance has a long history of thousands of years, passed down continuously within the imperial palace and ancient Chinese theater and opera. Soaking up profound wisdom from every era and dynasty, it has become a complete system of dance embodying traditional aesthetic principles with its unique dance movements, rhythms, and inner meaning.”

Mr. Everett said, “We loved it so far, it’s fantastic. The colors and the dance are just unbelievable.”

Margaret, Kathy’s mother, was most impressed by the dancing.

“She can’t believe how together they are. Timing wise,” said Mrs. Everett.

Marshall Everett, Greg and Kathy’s son, was also at the show. He makes a study of other cultures.

“It’s wonderful how they’re capturing Chinese culture and how they are interpreting it,” he said. “It’s just really enjoyable.”

The Shen Yun website says, “Shen Yun cannot be seen in China today, where traditional culture has been nearly lost. Yet Shen Yun—a non-profit organization—has become an international phenomenon, bringing the wonders of ancient Chinese culture to millions across the globe.”

“I think that is very tragic,” said Mr. Everett, “because it is so beautiful, it should be shown, everybody should be able to see this.”

The Steadfast Lotus, a segment that mirrors countless present-days stories of courage in China, and how steadfast faith in the mediation practice of Falun Dafa gives newfound hope, touched his heart.

“I found that to be shocking because people should be able to express themselves and believe in what they want to believe in,” said Mr. Everett.

The website says, “In 1999, the Chinese Communist Party (CCP) initiated a persecution campaign against Falun Dafa, a meditation discipline based on the principles of truthfulness, compassion, and tolerance.” The persecution is ongoing today.

Mr. Everett thinks people should see Shen Yun. “I would say go see it for the cultural and historical interpretation of the dance.”