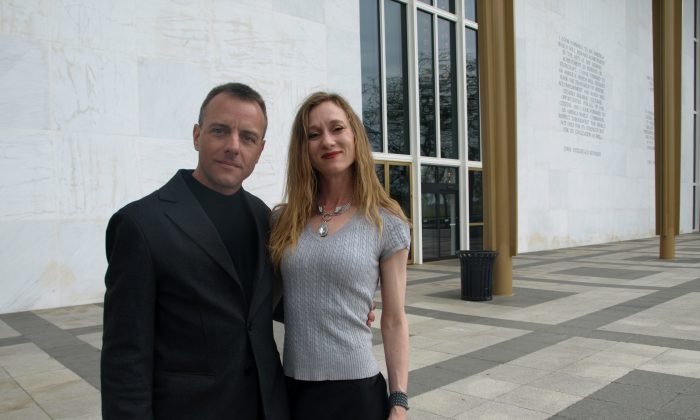 WASHINGTON—Ms. Jocelyn Clayton, a dancer and administrator, and Ms. Stephanie Brophy, a songwriter and attorney attended Shen Yun at the Kennedy Center Opera House on April 26.

“It was acupuncture and how it helped me that showed me the spiritual aspects of Chinese culture. But, Shen Yun is naturally a much deeper and more spiritual experience because of the choreography. It is much more than interaction between people, it is profound,” said Ms. Brophy.

She continued, “People need to learn that China has something we Westerners don’t have—they have a much deeper, richer history … They have an understanding we can’t have yet, so we should tap into that.”

What impressed Ms. Clayton was that, “you can connect with the feeling of each dance.”

“Through the universal language of music and dance, Shen Yun weaves a wondrous tapestry of heavenly realms, ancient legends, and modern heroic tales, taking you on journey through 5,000 years of Chinese culture,” said Shen Yun website.

“Chinese music has something that strikes a person’s soul. There’s something about Chinese music that you can hear that tingles deep within your soul. I guess it’s like everything else performed by Shen Yun, it hits home,” said Ms. Clayton.

Ms. Brophy searched for a long time for the meaning of life, something she thinks that Shen Yun represents, “Chinese culture is a practice of life … It is an ancient civilization and culture that has found a way, a guidance system, because it is not based on rituals but on the realities of life,” she said.

For her, “Chinese culture is older and has more experience. Maybe they know something we don’t know yet.”

Under the influence of Confucianism, Buddhism, and Taoism, “Chinese culture has generated a rich and profound system of values. The concepts of ‘man and nature must be in balance,’ ‘respect the heavens to know one’s destiny,’ and the five cardinal virtues of benevolence, righteousness, propriety, wisdom, and faithfulness … are all products of these three religion’s teachings,” explains Shen Yun website.

“It was so exciting. What a vibrant performance, and it was in my eyes so emotional!” said Ms. Cruz.

She continued, “It gave us something spiritual that draws everyone into the show. Shen Yun reminds us that there is a higher power and tells all of us where our life came from, where we originated.”

“We learned that it is our traditions that tie us to a country, our home, and so much more. I think that all this is important,” she said.

Larry Moffitt, vice president of the Washington Times Foundation, was a member of the audience during the Shen Yun evening performance on April 25.

“Shen Yun is so graceful and the performers show tremendous mind and body unity and harmony. Everything flows so well. It’s very heavenly, very peaceful and beautiful,” said Mr. Moffitt.

The show was unique and exceptional because it also expounded on the theme of compassion, “which is very important … I was deeply moved by the performance,” he said.

In describing the theme about compassion in the show, Mr. Moffit says, “It shows bringing beauty out of adversity, [and] bringing grace and love out of brutality and harshness.”

Reporting by NTD Television, Lisa Fan, and Heide B. Malhotra