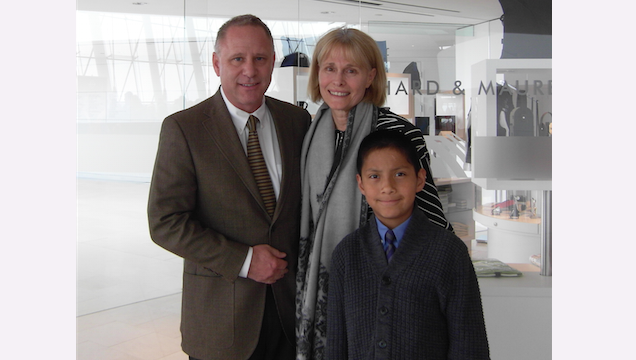 Shen Yun, ‘There’s So Much to Take In’

KANSAS CITY, Mo.—”Very disciplined, very creative, very compassionate, great communication through the stories and a lot of love and caring and protecting of each other,” said Chet Surmaczewicz, after seeing Shen Yun Performing Arts, on March 30, at the Kauffman Center for the Performing Arts (Muriel Kauffman Theater).

Mr. Surmaczewicz is regional executive director of hospitality for Greystone Communities and director of Santa Marta Retirement Community. He and his wife Cindy Surmaczewicz attended Shen Yun’s final performance of four in K.C. this season.

New York-based Shen Yun has four touring companies that visit over 100 cities in 20 countries each season. Shen Yun will next move on to deliver five performances at Chicago’s Civic Opera House on April 2-5.

“It’s just so much to take in. There is so much going on at one time that it’s really quite difficult to absorb it all. I think you would have to see it several times to take it all in,” said Mr. Surmaczewicz.

He said it was “marvelous from the standpoint that the costumes are so magnificent and the dancers are so elegant and with the introduction of what we call gymnastics, it really makes it quite delightful to watch.”

Shen Yun’s program consists of 20 or so mini-dramas that depict scenes from China’s history, mythology, folklore, and literature.

Mrs. Surmaczewicz added “It was very captivating to watch, but it tells … what I believe to be a very true story of difficulties in the lives of many who had to live through difficult times in China, and I saw hope, lots of hope for the future.”

She further commented on how much she loved it. “It was all fantastic; it really was. I’m somewhat speechless, because it was more than I could ever have imagined. I have a lot of respect for the choreographers and the dancers. I just thought they were amazing. We’re very happy!”

Shen Yun’s mission is to revitalize traditional Chinese culture through the performing arts. While classical Chinese dance is at the core of its program, it also showcases elegant handmade costuming, digital interactive backdrops and a full-orchestra featuring both Eastern and Western Instrumentation, as well as several solo vocalists.

“A lot of perseverance,” Mr. Surmaczewicz pointed out. “What I didn’t realize is that through the narration, some of the things that we take for granted here in the United States actually cannot be performed in China, so that was interesting and heartbreaking at the same time, to think past our world, so to speak.”

“The music was marvelous. It all fits together so well, all the different parts of the orchestra and its actually through the music. The music really tells the story through the different instruments and the pitch and the sound and the intensity,” he said.

“I’m thinking about how I am going to tell people at work tomorrow,” Mr. Surmaczewicz said. “It’s just very colorful, graceful movement, the story telling is very, very interesting, and what I liked is, in the 5,000 years of telling the story, it was interesting how certain periods unfolded and actually there was a sense of humor in some of the parts of the show.”