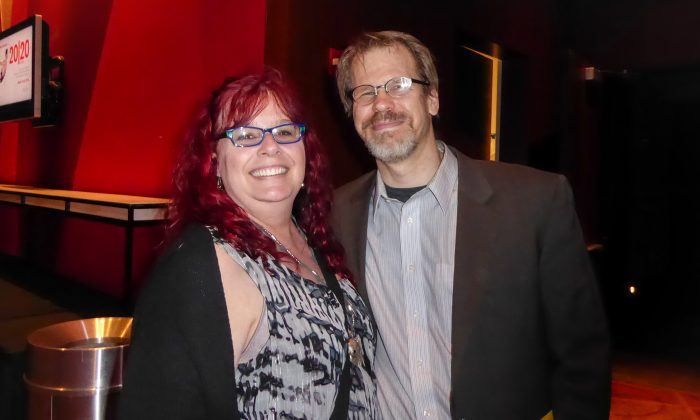 ATLANTA—Kevin Hamilton was just plain mad after watching Shen Yun Performing Arts. He loved the experience—”the art is beautiful, the dance is beautiful, and the music is amazing,” he said. But he felt righteous indignation when he learned what is happening in China.

“They’ve all but eliminated culture and art there, and I just find that infuriating,” the stock broker for E*Trade Financial Corporation said. He attended opening night at Cobb Energy Centre with his wife, Lori, a systems analyst for Verizon Wireless.

Mrs. Hamilton agreed with her husband: “It’s amazing that it’s being brought to light, because I think there are so many people that just aren’t aware of what has gone on and the cultural oppression over the last 100 years or so.”

“The company’s mission is to use performing arts to revive the essence of Chinese culture—traditionally considered a divinely inspired civilization. Since the CCP is officially an atheist regime, it is afraid of the freedom of expression this arts company enjoys in the West,” the Shen Yun website states.

Mrs. Hamilton appreciated that Shen Yun is showing people who stand up for themselves: “It’s great to see people stand up for their culture and for their rights, and I hope that it actually has an outcome where change can be made for the better.”

“It’s sad, because these people should be allowed to live their lives, period,” Mrs. Hamilton said.

The Silvermans, also in the audience Friday night, focused more on what was being preserved than on what have been nearly lost. One by one, they found elements of each of dances enchanting.

Jeff Silverman, the chief strategy officer for advertising firm Morrison Agency, Inc., thought the performance was wonderful from its opening moments when the stage is covered in clouds, to “Celebrating the Divine,” a piece where Tibetan women dance in traditional dress with long sleeves, to the drumming by male Mongolian dancers.

He enjoyed the storytelling aided by live-action synchronized with a projected digital backdrop. He found that exciting and fun. This effect was played up in one of his wife’s favorite stories, “Monkey King and Dragon Palace,” in which the Monkey King travels to the sea’s bottom in search of a magical weapon.

Ashley Silverson, a marketing consultant, also mentioned the “Manchurian Maidens,” in which the ladies appear in raised flowerpot shoes and elaborate headdresses.