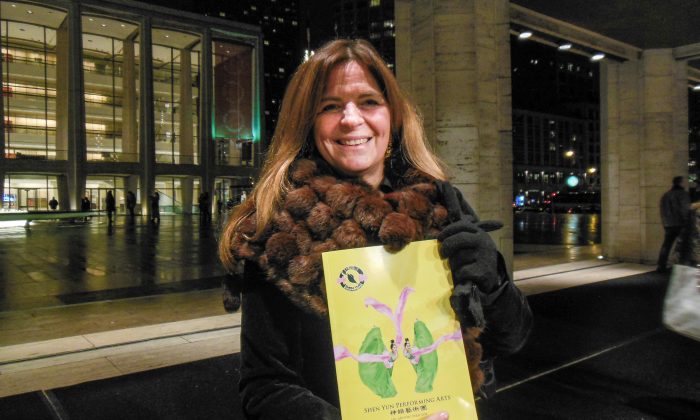 “It was one of the most beautiful experiences” that upstate New York business owner Nannette Forteza had ever seen of the Chinese culture. “It was well presented and very emotional for me because of the way that the dances present the divine.”

Ms. Forteza witnessed the beauty and splendor of this New York-based performing arts company at Lincoln Center in New York on Jan. 15.

Each year, Shen Yun transports audiences to China’s ancient dynasties and rich history of myths and legends through classical Chinese dance, a unique orchestra, and an animated backdrop. One word consistently came from Ms. Forteza’s mouth—”beautiful.”

China’s culture was once imbued with reverence for the divine. It originated from Confucianism, Buddhism, and Taoism and honored principles such as loyalty, benevolence, and justice, states the Shen Yun website.

The dancers tell some of China’s ancient legends by expressing their inner emotions through the dance movements, which often move audience members to tears.

Ms. Forteza, who cried during the performances, said she filled up with emotion “because I got to see the culture of China as [it] is. It is so beautiful, very beautiful,” she said.

What often strike audience members from the moment the first curtain rises are the brightly colored costumes and the multitude of divine beings flying down from the heavens, which is projected on an animated backdrop. They then appear on stage as if walking out from a moving scene.

This profound opening heralds in the beginning of Chinese history as the countless Buddhas and Taos incarnate into the first imperial court.

“A lot of love is what I saw, lots of love. It was very beautiful,” she added.

She said the message of one of the vocal performances was that humans have to try not to sin so they can be received by the Lord in heaven.

Ms. Forteza was so overjoyed by the evening that she said she wanted to hug all Chinese people, especially her own Chinese friends.

“I want to show [Shen Yun] to my friends, who are Chinese, … how beautifully this group of dancers and directors and producers can in 2 hours [show] the journey of China, the suffering of China, but also the beauty of China, and the hope of China,” she said.

“I hope Shen Yun can continue to do this many times,” she said.