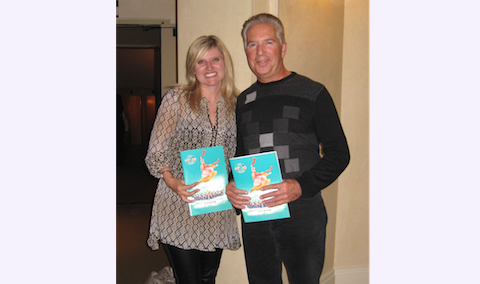 Mr. Reed, a decorated U.S. Navy Diver and submariner, has penned both fiction and non-fiction books. He is also a managing director and co-founder of Aventi Group, which offers marketing consulting services for high tech firms.

New York-based Shen Yun, formed by a group of leading overseas Chinese artists in 2006, seeks to revive the divinely inspired culture of China through dance and music.

The stories of Shen Yun are told with classical Chinese dance, a rich art form developed over the millennia of Chinese culture.

“China’s deep cultural traditions are contained in classical Chinese dance, allowing its movements to be richly expressive, such that the personalities and feelings of characters can be portrayed with unparalleled clarity. It is therefore capable of depicting scenes from any time period, whether ancient or modern, Eastern or Western, in a strikingly vivid way,” according to the Shen Yun website.

Mr. Reed was enthralled with the story-based dance performed by classically trained dancers dressed in colorful costumes, accompanied by the unique Shen Yun Performing Arts Orchestra, and vibrant animated backdrops. Mr. Reed said the message of compassion and hope portrayed in the performance was wonderful.

“Sophisticated dance techniques, an orchestra joining instruments from both the East and West, beautiful costumes, and a stunning backdrop—this is Shen Yun at first glance,” states the Shen Yun website.

“But digging deeper, one discovers a sea of traditional Chinese culture. Mortals and divine beings merge on stage as one. Principles such as benevolence and justice, propriety and wisdom, respect for the heavens, and divine retribution, all come to life, washing over the audience,” continues the website.

Feeling uplifted and happy, Mr. Reed said he would recommend his friends to come see Shen Yun. He attended the performance with Sara Blanchard, who said she wanted to see Shen Yun again.

Shen Yun ‘Something I have never seen anywhere else’

Linda Gary, licensed marriage and family therapist, was impressed by the traditional Chinese culture presented in the performance.

“It is beautiful. Something I have never seen anywhere else,” she said.

A Shen Yun performance includes over 20 vignettes that transport the audience members on a journey through China’s culture and beliefs, where myths and legends come to life, and virtues such as bravery, compassion, kindness, loyalty, and perseverance are personified.

Ms. Gary said that she was delighted with the compassion piece because it has a very good message.

She was referring to The Power of Compassion dance piece that depicts the persecution of Falun Dafa practitioners in today’s China. It highlights how compassion can overcome viciousness and bring unexpected blessings.

“I think compassion is one of the most powerful tools we have in our world to change all the sorrow and sadness, pain and violence, and those lessons are so important, starting with young children; teach them in school, show those things in school, we could change our world,” Ms. Gary explained.

Ms. Gary said that Shen Yun was quite a wonderful experience, and that if people missed it this time, they ought to see it next time.

“It was awesome, the magic of it. I love it, I love it,” gushed Dee Sanford, who was seeing Shen Yun for the second time.

While most of the approximately 20 vignettes are composed of classical Chinese dance as well as ethnic and folk dance, three pieces include vocal soloists using the bel canto technique.

As each of the singers perform, song lyrics appear on the digital, state-of-the-art backdrop in both English and Chinese which, according to Shen Yun’s website, are “brimming with philosophical reflection.”

Ms. Sanford said that she would come back to see Shen Yun, and would send the program book to her granddaughter.

To the performers, she said, “Thank you so much. I appreciate the energy. Thank you.”