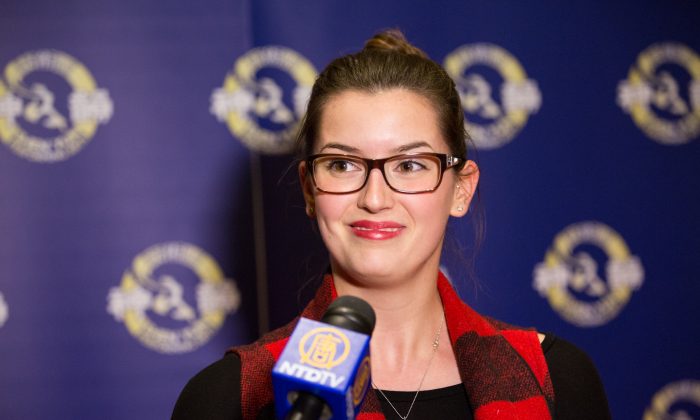 She was also impressed with Shen Yun’s meticulously made costumes.

“Shen Yun’s costume artists collect countless designs of traditional attire, ranging from those of emperors, ministers, and generals to the everyday clothing of the common people,” according to Shen Yun’s website. Costume artists then use bright colours to tailor and recreate hundreds of new pieces each season.

“I thought the costumes were magnificent. I really liked the piece with the female dancers having the long sleeves. It was very beautiful and very graceful,” said Charbonneau-Lefebvre.

Shen Yun stages performances of mainly classical Chinese dance, an art form that helped preserve 5,000 years of Chinese culture. It was passed down in imperial courts and in plays for thousands of years, constantly refined and enriched, dynasty after dynasty.

As a dancer she noted some of the unique elements of Shen Yun. “I loved the choreography and also the formations that were made. Often what we see in classical ballet is each individual has her own piece. But here the group dances create a global impression and it was really beautiful. I really liked it.”

Shen Yun was founded on a mission to revive authentic Chinese culture, a heritage nearly destroyed during more than years of communist rule. The Chinese Communist Party made systematic efforts to stamp out the traditional beliefs of Chinese people which were rooted in Buddhism, Daoism and Confucianism.

Ms. Charbonneau-Lefebvre said the performance was enriched by that aspect of the performance. “I think that is a reflection of the Chinese culture where there is a strong spiritual aspect and also a little magical, which was well represented by the dancers. Really, each piece was special and magical.”

She attended with her family including her cousin Anne-Julie Lozeau, who is also a dancer.

“It’s magnificent. I really love it. It’s very graceful, very artistic. I also love seeing the culture in the dance. You can also really feel it inside,” said Ms. Lozeau.

Ms. Lozeau said the culture of the Chinese performance came through in many aspects of the performance, including “the graceful side of the dance—the positions—the arms, the hands, all this, the costumes. It’s magnificent. Also the lightness of the dance and of the dancers. It was truly magnificent.”

She said she was most touched by the elegance of the performance.

“It was truly magical.”

With reporting by NTD.