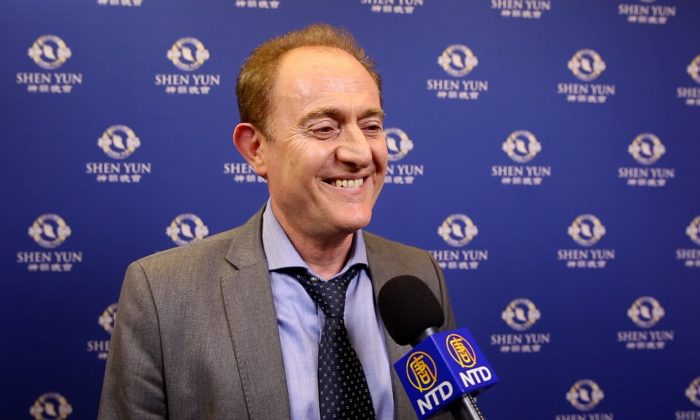 Mr. Heydari Hormoz enjoyed the premiere of Shen Yun in Nice, France on March 30, 2019: "It's a feeling which can't be described, it's divine! It's really divine! The dancing, the music, the orchestra... It's incredible! Unbelievable!" (NTD Television)

Mr. Hormoz, a manager of a real estate agency in the Brussels area, was full of praise for the famous classical Chinese dance and music company.

“The show is fabulous! Honestly, it’s magical; I’ve never seen anything like it. This is incredible—you have to see it to believe it!” said Mr. Hormoz enthusiastically.

He said the experience was indescribable, that “it is a feeling that cannot be described, it is divine! It’s really divine! The dancing, the music, the orchestra… It’s incredible. Unbelievable.”

“When you see this show, you feel something extraordinary… It’s not something usual, it’s not the dance you see everywhere, no, it’s divine. Yes, I confirm it,” Mr. Hormoz said.

Enchanted by the performance Mr. Hormoz added that he encouraged everyone to make the trip to attend a Shen Yun performance—he himself traveled across national borders.

“I encourage everyone, at least once in their lives, to come and see what I have seen. It’s magical! Frankly, it’s worth traveling from anywhere in the world to see this show. It’s beautiful. Beautiful!” Mr. Hormoz said.

Mr. Hormoz was filled with energy from the performance, but pointed out that the content was just as fulfilling as the beauty of the production. He spoke about the values and the respect for tradition as transmitted by the performance.

“Everything in the world has become an industry. Industry, computers… But this show is a plus for people, to make us remember what we were before and what true art is. This show is great art,” Mr. Hormoz said.

“Now everything has become very, very ordinary, but this show leaves us with a very good feeling. We believe in humanity, in the divine and all of this, there is no word to express it, I can’t explain it, really, it’s very, very good,” he said.