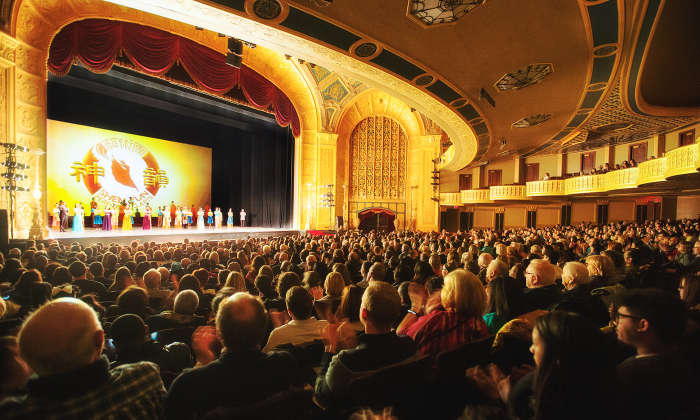 DETROIT—John Prosser deeply respects the mission of Shen Yun Performing Arts. He believes the traditional music and dance company provides a wake-up call for everyone to truly see past the surface of what the Chinese Communist Party projects—to understand what the Chinese people are really about.

“The Chinese people love God,” said Mr. Prosser, after the performance at the Detroit Opera House on Jan. 2. “And they believe in a Creator, and they don’t like the fact that they are oppressed by the communist [regime] that suppresses this beautiful history that’s existed in China for 5,000 years.”

Mr. Prosser summed up Shen Yun’s mission well. As the website states: “For 5,000 years, divine culture flourished in the land of China. Humanity’s treasure was nearly lost, but through breathtaking music and dance, Shen Yun is bringing back this glorious culture.”

The culture was nearly lost, because as the vice president and partner at a home nursing care company explained, the Chinese Communist Party set about dismantling traditional Chinese beliefs in the divine.

“Most people don’t understand who Mao was,” said Mr. Prosser, mentioning Mao Zedong, the first leader of the communist party in China. “He killed millions of his own people to seize power, and part of that process was the adoption of the Marxist philosophy which included the elimination of God.”

Shen Yun aims to remind the world of this divinely inspired civilization. All of the dances, songs, and stories Shen Yun presents onstage honor the divine in some way.

Attending with Mr. Prosser was Sophia Bong, a physical therapist. Both have seen Shen Yun before.

I love it. It touches my heart.
— John Prosser

“When I see this kind of beautiful production depicting that which is believed by such a wonderful group of people, the Chinese people, I love it. It touches my heart,” Mr. Prosser said.

Mr. Prosser considered the artistry of the production to be magnificent. “The costuming is gorgeous, the dancing is extraordinary. But the message is powerful. It’s a beautiful message. And I love that it’s hopeful,” he said.

Ms. Bong agreed that it was tremendously uplifting. She appreciated the fact that Shen Yun is located in New York for these artists to take up the fight for those in China who are unable to fight for themselves.

Several of Shen Yun dances depict a current persecution in China of people of faith. “Whoever decided to do this has a lot of chutzpah. I mean, they are bold and audacious and I really admire it,” Mr. Prosser said.

The values of the faithful expressed by Shen Yun are very similar to Western traditions, such as Judaism or Christianity, according to Mr. Prosser. There exists a divine architect and a human soul which cannot be bound by anything or anyone. We all are souls who can choose to be good.

We can choose to love, to understand, to have “understanding and tolerance and acceptance and kindness. All these beautiful human qualities we all possess, but maybe some of us don’t always exercise. So I think this is a powerful statement and I admire it. I think it’s extraordinary storytelling. And it moves my heart, and that’s why I came back,” he said.