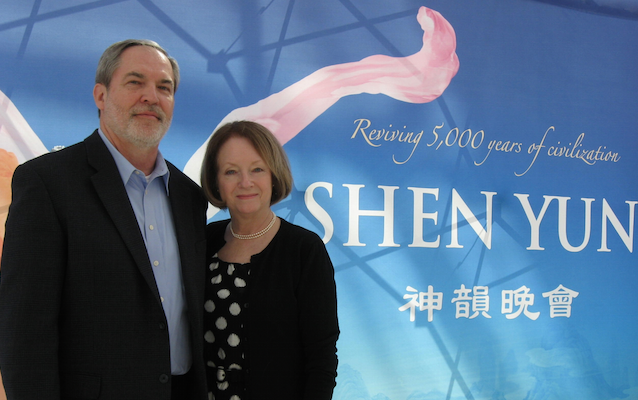 KANSAS CITY, Mo.—“It was really a show of hope for us as well as for other countries,” said Pastor David Pierce, after seeing Shen Yun Performing Arts perform at the Muriel Kauffman Theatre, part of the Kauffman Center for the Performing Arts. He attended the classical Chinese music and dance performance with his wife, Joan, on March 29.

One dance focusing on the lotus flower brought a sense of peace to Pastor Pierce. He said, “It really not only showed the beauty of it, but also showed just the serenity of just what China can be, the hope that can live within China.”

“I think sometimes we forget about that because we only view China from the harsh side, the political side. This really shows, I think, the hope of the people of China,” said Mr. Pierce, Pastor at Shiloh Bible Fellowship.

As for the artistic element, the couple thoroughly enjoyed it.

“The music was incredible,” Mrs. Pierce said. “I really liked the blend of the traditional Chinese instruments with the typical Western instruments so I enjoyed that and the dancing, and I thought it was really fascinating the way the dancers used their costumes to express themselves in their dance.”

“I really, really enjoyed it,” she said. “The choreography was beautiful. The music was fantastic. It was just a beautiful show. And I think it does really show the plight of China, and I was really impressed with that.”

Shen Yun’s “mission is to use performing arts to revive the essence of Chinese culture—traditionally considered a divinely inspired civilization. Since the CCP [Chinese Communist Party] is officially an atheist regime, it is afraid of the freedom of expression this arts company enjoys in the West,” the company’s website explains.

Pastor Pierce felt that he really had his eyes opened by the performance. “I think we need to realize just how much the bamboo curtain has shut down China from the rest of the world, and today’s show opened that up quite a bit for us.”

The Pastor felt that the spirituality displayed by Shen Yun is “critical to the future of China. I think that right now they’ve realized that they’ve kind of run into a wall when it comes to … what they’re going to be able to do and accomplish if they want to go globally. I think China is opening up their doors and spirituality is going to be a big part of that.”

Mrs. Pierce agreed. “I am very hopeful for the future of China. I was very excited. I think this presentation really demonstrates the hope that it’s possible in China.”